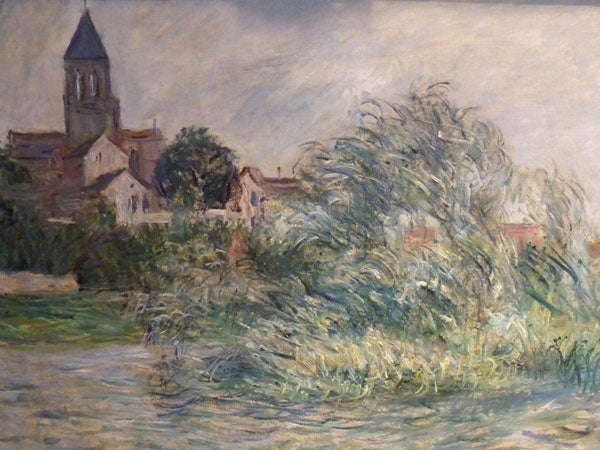 In this photo provided by the United States Attorney’s Office in New York shows an an 1881 painting by Impressionist master Claude Monet entitled “L’Eglise et La Seine a Vetheuil.” AP

MANILA, Philippines—Members of the class suit against the estate of the dictator Ferdinand Marcos recently received a “notice of class action settlement” from their lawyer Robert A. Swift through Filipino cocounsel Rodrigo C. Domingo pursuant to an order of the US District Court to the District Court of Hawaii.

The notice informed members that the court would, among other things, decide whether a settlement between the class and the owner of a (Monet) painting formerly belonging to Imelda Marcos was fair, reasonable and adequate.

The notice said that in November 2012, the district attorney of New York county unsealed an indictment against Vilma Bautista, former personal assistant to Imelda Marcos, which said that Bautista had sold a valuable French impressionist painting (the Monet) to an unknown buyer without authority from Marcos for $32 million.

Swift immediately filed a lawsuit against Bautista in New York Supreme Court seeking the painting, other art works owned by Marcos and the proceeds from the sale of the painting.

As Swift was preparing to file a second lawsuit against others involved in the sale of the painting, discussions took place between himself and the buyer of the painting. In June 2013, the buyer agreed to pay the class suit members $10 million.

The $10 million was deposited in the class settlement fund in the Hawaii Federal Court. Swift said that in exchange for the payment, the class and its members would release the owner from all claims to the painting.

The notification said the Hawaii court will hold a hearing on Oct. 10 and then will consider whether to finally approve the settlement agreement as “fair, reasonable and adequate.”

It will be recalled that in April 1986 a suit was filed against the strongman Marcos on behalf of 9,539 Filipinos, or their heirs, who were tortured, summarily executed or disappeared during Marcos’ rule between September 1972 and February 1986. The estate of Ferdinand E. Marcos was substituted as the defendant upon Marcos’ death in 1989.

Swift’s notification said that should the court grant final approval, the settlement of $10 million will be distributed to class members. The lawyer will ask the court to give $1,000 each to eligible class members in 2014.