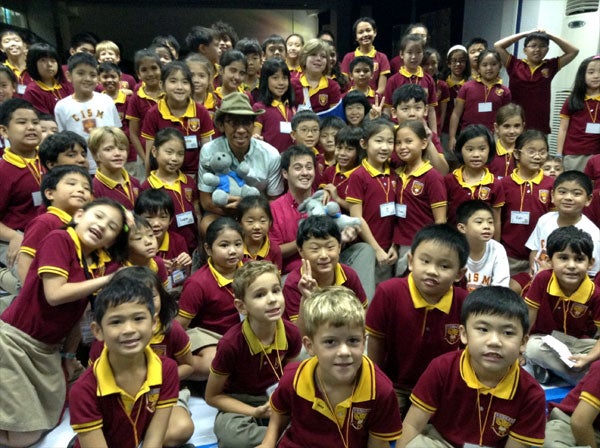 MANILA, Philippines – Today’s generation of children are adept computer users, playing electronic games and spending substantial time online. But listening to good stories has yet to lose its appeal, as shown by Inquirer’s Read-Along on Tuesday.

“It’s amazing how reactive kids can be,” said television host and Read-Along ambassador Kim Atienza after reading to children Christine Bellen’s “Filemon Mamon” and talking about his passion for books and animals.

People are often distracted by media such as Internet and television that “you’ve forgotten about these simple joys and simple thrills like reading a good book,” he said.

Over a hundred students aged 7 to 12, from the Chinese International School Manila (CISM), eagerly listened and participated in the September 3 launch of the Inquirer Read-Along Caravan.

Although the CISM has a collection of over 16,000 books and e-books in their two-level library, Accreditation and Learning Coordinator Wendy Wycherley said “there is something traditional, something great about storytelling.”

“And I think there is magic in just sitting down and talking. Forget technology, even forget the printed word. This is so much more powerful. I think it pulls children to something that’s real. It’s like theater. This is something we’d want established in our school,” she said.

Atienza said he was pleasantly surprised with the children.

“I was not expecting a reaction as intense as these kids. They were really focused, like watching a movie. And they were silent, with every word you say having an impact,” Atienza said.

The weatherman, also known for his endless trivia on animals, said he was inspired by the students to read even more.

In addition to developing the skill of listening, Atienza emphasized the importance of reading and storytelling to education.

Motivated by Atienza’s talk about learning through reading, 10-year old Lucas Batungbacal said, “I learned that reading is good and if you read a lot it also build up a lot of information in your head. Reading really helps you.”

The Inquirer Read-Along has been in progress for six years. It has had more than 250 sessions participated in by over 16,000 children and more than 300 celebrity readers in more than 50 cities nationwide.

The advocacy aims to address declining readership among the youth.

With computers, smartphones, video games, today’s kids are still bored–so what to do now?

Muslim, Christian kids learn together in Inquirer Read Along session