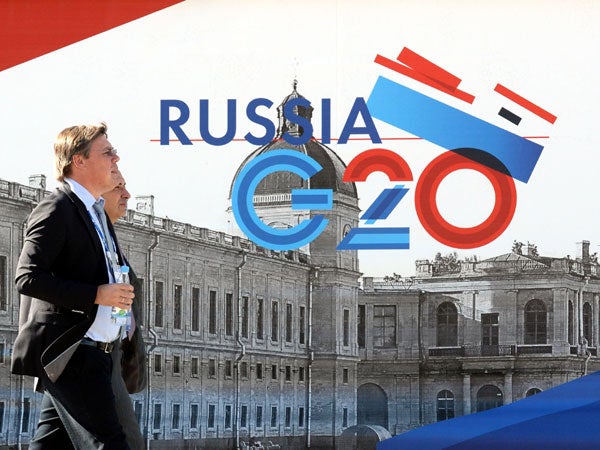 Men walk past a banner with the logo of G20 Summit in Saint Petersburg on September 4, 2013 ahead of the G20 Summit starting tomorrow. AFP

Police seize ‘naked Putin and Obama’ painting ahead of G20

SAINT-PETERSBURG — Russian police have raided an erotica museum in Saint Petersburg and confiscated a painting showing a naked Vladimir Putin with an erect penis squaring off at his equally naked US counterpart Barack Obama, a curator said Wednesday.

The raid on the museum, which describes itself as one of the largest erotica museums in Europe, took place Tuesday night ahead of Obama’s expected arrival in Russia’s second city to take part in the G20 summit later this week.

The museum’s curator Alexander Donskoi said the museum was temporarily shut down, suggesting that the gesture was political.

“I do not understand why it’s necessary to mix arts and politics?” he told AFP.

The painting shows muscle-bound images of Putin and Obama facing each other with massive erect penises and their fists raised.

After the raid the painting’s author fled to France where he is applying for asylum.