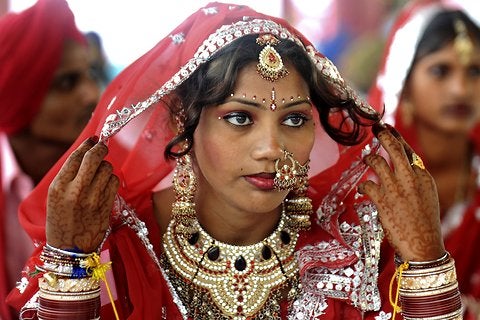 NEW DELHI – India’s focus on marriage has fuelled an industry worth billions, lining the pockets of everyone from wedding planners to jewelers to astrologers and now, a new TV channel hopes to cash in.

When television producer Anuranjan Jha met his wife through a matrimonial website 12 years ago, he came up with what he describes as a gold mine of an idea.

“I thought, if the internet, which only reaches a small percentage of Indians can be so successful in arranging marriages, then why not television which is everywhere?” Jha, now the managing director of Shagun TV, told AFP.

More than 47 percent of Indian households have a television compared with just over 3 percent with internet access, according to 2011 census data.

It took Jha more than a decade, but he finally launched Shagun TV (the name means “auspicious TV” in Hindi) in April.

He hopes to see that number double to twenty million soon, as he expands the channel’s distribution network, currently limited to a single national satellite TV provider, Videocon d2h.

The channel features shows designed to help viewers find brides or grooms, look up honeymoon destinations, shop for jewelry, check out horoscopes and learn how to get along with one’s in-laws.

A peppy presenter profiles a series of young men in search of a bride as their candid, photoshop-free pictures pop up on screen, with a message urging interested families to contact the channel if they like what they see.

“It’s an inspired idea that could really work in a country where so many people — women in particular — struggle to find partners,” De said, pointing out that young Indian professionals had limited opportunities to meet prospective partners due to busy careers and the absence of a widespread dating culture.

By the time the channel launched, some 2,000 people had already contacted Jha, expressing a wish to participate in his shows and find a suitable boy or girl.

No dating, only marriages welcome

In a country where arranged marriages are still the norm and dating is often frowned upon, matrimonial advertisements in newspapers and websites are used by many to find prospective partners.

“Kahin Naa Kahin Koi Hai” (“Somewhere There is Someone”) was launched with great fanfare in 2002, with Bollywood icon Madhuri Dixit anchoring the program.

But the show opened to poor reviews and criticism from viewers who objected to people choosing their spouses on TV and was taken off the air after just ten weeks.

In an interview with “Stardust” magazine nearly a decade later, Dixit said the show was “way ahead of its times”.

“Many even thought that we shouldn’t have done it, wondering ‘how could someone marry on TV’? They thought it was too private an event to show on TV,” she said.

“Had the show started today, I am sure it would have enjoyed a different outcome.”

Jha hopes so and told AFP he did not want to encourage dating, focusing instead on the channel’s appeal to a conservative demographic.

“We will not arrange any meetings between a boy and a girl without their families present. We want people to know each other’s families before going ahead with anything,” he said.

“Middle India has not changed that much as far as this sort of thing is concerned. Families are still very involved in the decision-making around marriages,” she said.

“Plenty of young people are happy asking their families for help in finding brides or grooms. They tend not to have such high romantic expectations, they enter it with their eyes open, with a willingness to compromise.”

Optician Namrata Maheshwari, a 25-year-old participant on a Shagun TV show about in-laws, agreed, citing her own successful arranged marriage to 29-year-old Mukul.

“It should stay as it is. However modern we become, however much our lifestyle changes, some of our old traditions should continue to prevail,” she told AFP.

So far Jha has spent at least 600 million rupees ($10 million) setting up the channel, he estimates. He expects to turn a profit soon.

“In India, marriage is tradition, it is culture, it is ritual and it is a market worth 1,250 billion rupees annually,” he said.

“Under such conditions, it won’t be difficult for this channel to do well.”