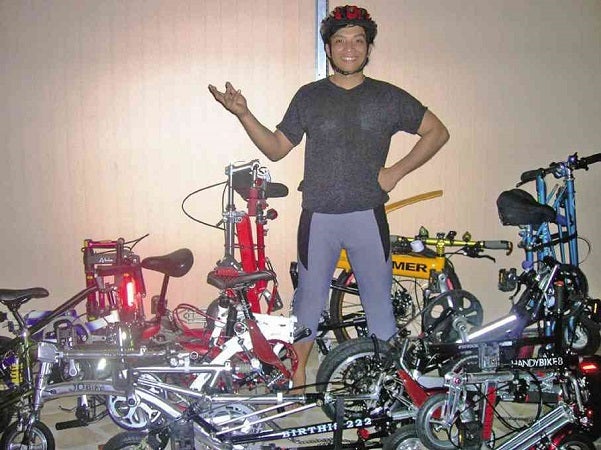 Noel Rayos doesn’t just ride bicycles, he folds them with his bare hands, too.

No, he’s not a muscleman who bends metal for fun. Rayos is a versatile actor who is at ease in plays and musicals, comedy and drama, English and Tagalog and once had a bike stolen, even though it was chained and locked.

“I never again owned a non-folding bike that I couldn’t bring inside to where I was going,” he says.

“My first folding bike was a 12-inch wheel Dahon copy from Zhuhai, Mainland China. I’ve bought and sold dozens of others since then.”

He’s been doing theater work professionally since the mid-’90s, starting out with Repertory Philippines.

“I’ve had several teachers, but I look up to the late [Rep founding artistic director] Zeneida Amador as my chief mentor. She taught me about theater as a craft, a lifetime calling.”

His first encounter with her, however, goes a little further back. “She directed our school production when I was a student at De La Salle-Santiago Zobel School, and I’ve been in theater ever since.”

Until the mid-2000s, he was a resident actor for Rep, appearing in almost all its productions every season. He had occasional forays into shows by Philippine Educational Theater Association (Peta) and Triumphant People’s Evangelistic Theatre Society (Trumpets) as well as Singapore Action Theatre’s “Chang and Eng the Musical.”

Rayos then became a performer at Hong Kong Disneyland for three years straight, and has since been flying back and forth for projects in Manila, for Gantimpala Theater, among others, and the rest of Asia.

He currently has 16 folding bikes, two of which are for regular commuting while the rest are for leisure and fun.

Other than flipping over twice because of “overrated brakes” while breaking in a certain model that he’d acquired, Rayos rides them everywhere with no incident.

“My latest all-round commuter bike weighs just over seven kilos. I bring her everywhere, and if it rains, I fold and take her on the bus or MRT. I average about 100 kilometers per week on it.”

“They attract a lot of attention but, overwhelmingly, the reaction is positive for the bikes’ cool-cute factor.”

Rayos says his collection went into “overdrive” when he moved back to Manila. “There’s lots of space in my parents’ house in Las Piñas, unlike my tiny condo in Makati and the dinky apartments I lived in when I worked overseas in Macau, Hong Kong and Mainland China—which is the Mecca of folding bikes in Asia next to Japan.”

When it comes to his collection, Rayos knows his stuff. He rhapsodizes about these contraptions, ticking off the different models’ specs such as cogs, cranks, rear sprockets, Kevlar belt drives, pneumatic wheels, and greaseless enclosed dual-chains, whatever those mean.

From scouring the Internet to getting leads from fellow riders and enthusiasts, Rayos’ collection now includes models from all over the world: Europe, America and Asia.

“My Zerobike was made in Spain and retailed in Japan from where it was imported by a Malaysian surplus bike seller and sent to Singapore, from where my friend was nice enough to send it via balikbayan box to me in Manila. It’s a very well-traveled bike!” he says, laughing.

He has one purchased from a dealer in Manila who used to be connected with the Light Rail Transit Authority. Apparently, folding bikes had been purchased for mass distribution but plans were scrapped when there was a change of administration. “It weighs 10 kilos with 16-inch wheels and still has an LRT sticker on it.”

In addition, Rayos owns five unicycles. His tallest “giraffe” unicycle is five-feet high and comes with a yellow tire. “But I have spare red and white tires. I juggle on that one.”

Rayos got into unicycling only a few years ago while working for the Venetian Resort Hotel and Casino in Macau. He’d been assigned to do promotions work and he started to miss performing.

“I bugged my coworkers, a stiltwalker and a unicycle clown, to teach me their skills.”

He now goes to Hong Kong once every few months to do stiltwalking or unicycle juggling gigs.

Rayos has, obviously, a high sense of body awareness. As it turns out, he’s also a fifth kyu (level) aikidoka (aikido practitioner).

“It’s a great ‘soft-style’ martial art that develops balance, flexibility and centeredness. I got into it after watching Steven Segal films. He’s aikido’s most famous practitioner.”

For now, he’s rehearsing for Trumpets’ new musical “The Bluebird of Happiness,” based on Maurice Maeterlinck’s play “The Blue Bird,” with book and lyrics by Jaime del Mundo and music by Rony Fortich.

It’s a homecoming of sorts, as he originated the role of Prince Christian for the group’s “Little Mermaid” back in 2000.

He’s looking forward everyday to their rehearsals. “The location hall is a bit out of the way, so it’s a good excuse to use my bikes!”