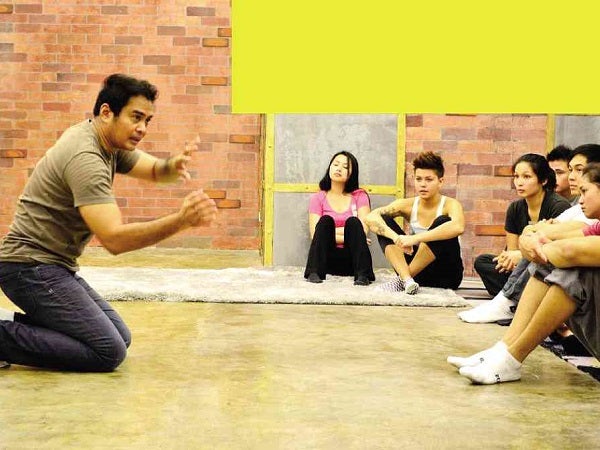 How John Arcilla became the ace actor of stage and screen

On the day Inquirer got in touch with him, John Arcilla was in New York, rushing to an appointment with a film director for a new acting assignment.

He had just wrapped up five musical shows in New York and Las Vegas and is preparing for another show in Chicago (Sept. 13) and Houston, Texas (Sept. 21), before flying back to Manila by Oct. 1 for the Philippine premiere of Raymond Red’s “Metro Manila.”

Then he’s off again to New York to shoot an American film about a gay marriage between an American guy and a Catholic Filipino groom.

“I play the role of the religious father of the Filipino guy. It is a light comedy-drama film. The script is hilariously written,” he says.

The last time we saw Arcilla on stage with some regularity was during his Tanghalang Pilipino days in the early ’90s where he essayed roles in Shakespeare’s “Julius Caesar” and Filipino classics like “Orosman and Zafira” and “Walang Sugat,” among others.

After less than a couple of decades in theater, he ventured into film, winning Best Actor trophies for work in Gil Portes’ “Mulanay” and Carlos Siguion-Reyna’s “Ligaya Ang Itawag Mo Sa Akin.”

Last year, he was cast as the security guard in the Tony Gilroy action thriller “The Bourne Legacy,” and early this year, he was commended for his part in the independent film “Metro Manila,” which won the 2013 Audience Award for Best World Dramatic Film at the Sundance Film Festival in Park City, Utah, USA.

Through all these big breaks in film, Arcilla admits he could not have enjoyed what he is reaping now had it not been for his love affair with theater.

“I think the joy [of theater] is in the challenge of creating a different world right there onstage, in front of your audience. Of course you are not just playing roles, you are continuously studying histories, cultures, human behaviors and bigger things than just a ‘boy and a girl, you and me’ stories. Every other play feels like the culmination of an event, and you can look at it on many layers—in human, communal and global terms.”

The acting bug bit Arcilla as early as age 7 when, before going to bed and staring at the ceiling of his humble abode, he imagined himself singing on a platform before a big audience and reveling in the applause. It was the martial law years, and his family was living in the middle of his mother’s coconut plantation in San Luis, Aurora, near the hacienda of former President Quezon.

In Baler, Aurora, where he started his grade school years, his only taste of theater was watching the comedia, the moro-moro and the cenaculo in the town plaza. At an early age, he also got to read an illustrated book of Severino Reyes’ “Walang Sugat.”

At Mount Carmel College in the same town, he became a champion orator and perennial winner in declamation contests. On top of that, he was winning one amateur singing contest after another.

He got his first theater grounding from mentor and first cousin Arnulfo Querijero, who was part of Imee Marcos’ Dulaang Kabataang Barangay. After being invited to perform excerpts from Broadway musicals, Arcilla began dreaming of appearing as a lead performer in stage plays.

Which came true when he joined Tanghalang Pilipino, the resident theater company of the Cultural Center of the Philippines, then under theater director Nonon Padilla. He played the male lead in the moro-moro-inspired “Orosman and Zafira” and even got to perform it in Paris. He was also the male lead Temyong in “Walang Sugat,” as well as Crisostomo, Simon and José Rizal in Ryan Cayabyab’s Rizal musical trilogy (“Noli Me Tangere,” “El Filibusterismo,” “Ilustrado”).

There were other memorable roles—in Maxim Gorky’s “The Lower Depths,” Anton Chekhov’s “The Seagull” and Shakespeare’s “Julius Caesar,” among others.

Needless to say, he imbibed a lot from various teachers, starting with his high school mentor Rossana Palispis and Querijero, and later on from Bodjie Pascua, Rody Vera, Soxy Topacio, Zeneida Amador and Tony Mabesa.

But he considers his long TP training with Padilla as the major push that made him mature as an actor.

“It was our rigid training, the script analysis he programmed for us, that gave me access to the basics of theater technique. Nonon is so respectable that you will do everything in your power to do what he’s asking of you without him having to nag you. But in between readings of James Joyce and Shakespeare, he would crack a joke, and it would really hit everyone’s funny bone.”

But while he was happy with theater, he was also aware of the plight of many theater actors. He was deeply saddened when actress Adul de Leon died of cancer; the wake was held in her little apartment and friends had to raise money to be able to afford the coffin. He also learned that Behn Cervantes, who recently passed away, had to sell property to pay for medicine and hospital bills. Another theater colleague, Bong Embile, also said goodbye soon after, and it was fundraising time again for his hospitalization and burial.

“I felt so scared thinking that after a theater person has given everything for his art, he will die just like that and be unable to afford his own burial,” says Arcilla.

Fortunately, Arcilla has been kept busy by more lucrative work. His first TV commercial spawned the famous line, “Coffee na lang, dear” and opened doors for him outside of theater. These days, Arcilla has also invaded television through teleseryes like the recently concluded “Pangako Sa ’Yo” and “A Beautiful Affair.”

For him, there is only one source of acting: the truth within. “You can magnify it or make it subtle or subdued, depending on the medium and the genre. You tend to act big in theater but on TV and film, it’d look too magnified. But some theatrical gestures will sometimes add more to what is needed by the character you are portraying. Sometimes, both caricature and genuine emotion work, depending on the character you are working on.”

“But as much as possible, I try to veer away from caricature, unless it is really required,” he adds. “I think I am lucky that I don’t really get just one type of conventional character. I love them all, from ‘Pangako Sa ’Yo’ to ‘A Beautiful Affair.’ Most of the time, I usually look for and dig into each character to make my work more exciting, but still in context.”

His advice to aspiring actors: “Every person is a special kind of artist. Be yourself. You are a thousand times better than the best actor you want to be. If you want it, it will come—for as long as you work hard for it.”