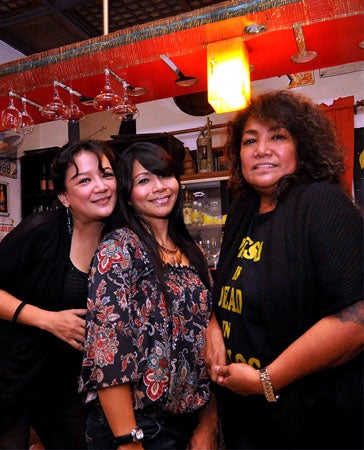 According to the writer’s “rule of three,” things that come in three seem more satisfying, more effective, and more significant than those that come in other numbers.

Hence the Three Musketeers (even though they were actually four), Goldilocks and the Three Bears, the Three Stooges, etc.

There is also something to be said for the mystical power of three in music.

From the Ronettes to the Supremes to Destiny’s Child, three-part female vocal harmonies have been enormously appealing to pop audiences.

Which is why it seemed pre-ordained that three of the most distinctive female voices in Pinoy pop should eventually come together as a trio: Cooky Chua of Color it Red; Bayang Barrios, formerly of Joey Ayala’s Bagong Lumad, and Lolita Carbon of folk-rock pioneers Asin.

Individually, each of them has active and lengthy solo careers.

Barrios has just released “Malaya,” her sixth solo album since leaving Bagong Lumad.  Chua celebrates the 24th anniversary of her well-loved indie rock group Color it Red this month.  And Carbon continues to carry the torch for Asin as solo performer and living legend.

But it took serendipity to bring them together.

“It started with our advocacy in favor of the RH bill,” recall Barrios, Chua and Carbon over drinks at their usual hangout, the Conspiracy Café.

Every night seems to be girls’ night out for the Marias.  Chua and Carbon take turns discreetly nipping from a lapad (bottle of local rum).

Both used to be legendary tipplers in their day, but appear to have since matured toward a relative moderation in their booze intake.  Barrios is usually the designated driver.  In between fits of giggling, make-up tips and deciding what to order, we eventually piece together the Tres Marias saga.

The three would often run into each other during meetings of women’s rights groups leading up to the congressional vote on the Reproductive Health bill, an issue they all felt passionate about.

They of course knew each other from the music scene.  Someone started referring to them as “tres Marias,” (three Marias)  and the name stuck.  It was a foregone conclusion that they would be called upon to lend their voices to the movement.

Tres Marias debuted at a pro-RH bill concert when the three individual performers were requested to do a trio.

“At first we wanted to sing about women’s issues,” says Barrios.

But the combined vocal power of the three could not be contained by a single genre.  They might have been for the RH movement what Inang Laya was for Edsa ’86—the soundtrack to a moment in time—but wider horizons beckoned.

The trio soon grew into a more-or-less formal concern as more and more people clamored for the Tres Marias.  From doing cover versions of Asin, Beatles and old Pinoy folk gems, they soon graduated to new material written or rearranged specifically for them.   Barrios’ husband, guitarist and producer Mike Villegas was soon drafted as the group’s de facto musical director.

“We all came out of our comfort zones with Tres Marias,” says Carbon.  “I’m used to singing with my bands Asin and the Boys, Cooky has Color it Red, and Bayang is busy with her own projects.  But with Tres Marias, it’s still a learning experience for us.  The songs we do as a group are miles away from what we usually do as solo performers.”

“I’ve been performing for a long time,” she adds.  “But this is the first time I’ve sung with an all-female group. And I’m the queen!”

For her part, Barrios still has to pinch herself occasionally when she’s onstage with Carbon.  As a high school student in Bunawan, Agusan del Sur, Barrios was originally inspired to become a singer by listening to the songs of Asin.  To find herself onstage with her idol is still a mind-blowing experience.

But despite Carbon’s seniority, Tres Marias is an equal-opportunity venture.  Although their usual set list includes showcase numbers and crowd-pleasing solo spots for each vocalist, the magic happens when the three voices come together in seamless harmony.

“Hopefully, we achieve a kind of synergy,” says Chua.

It helps that all three have what might be described as smoky, sultry, aged-in-oak-barrels altos, with Carbon excelling in the lower register, Barrios taking care of the uppers, and Chua holding down the melody in the middle. If all goes well, the three voices blend seamlessly like single malts in a premium whiskey created by a master distiller.

Which is not to say that there’s not plenty of room for chance and spontaneity in a Tres Marias performance.

“We’re all right when we’re singing solo, but we still get nervous when we have to sing together,” says Barrios.

“Sometimes it becomes comedy,” adds Carbon.  “Our songs are serious, but we’re not.”

They’re still in the middle of road-testing the songs, she says.

As of this writing, Tres Marias is still in the middle of recording their first album, a six-song EP (extended play).  The line-up includes a cover of Florante’s “Sana,” and “Wika,”  a song specially written by Gary Granada for the group.  The disc is scheduled for release sometime in the coming few months.

In the meantime, listeners can savor the distinct flavor of Tres Marias at various clubs around town, and on Youtube; http://www.youtube.com/watch?v=encKKEKTd-g.