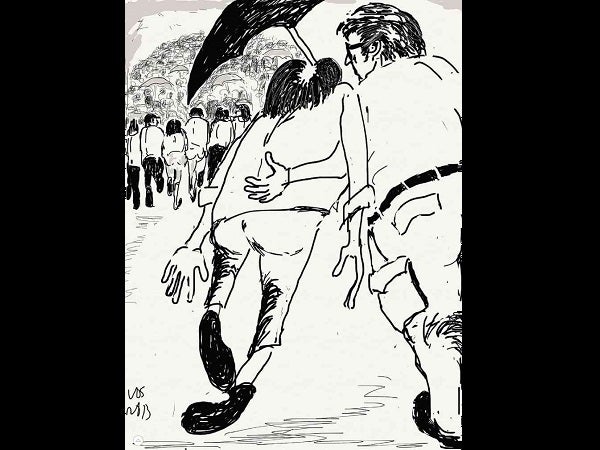 “LOOK, you gotta stand up to be counted!” Illustration by VOS

Thirty years ago, a whole generation by the standard measure, I began writing a regular feature called “Interesting Women” for the weekly Woman’s Home Companion.

I interviewed subjects of my choice and had a photographer assigned to me. I felt like a true pro, although, actually, already in my early 40s, I was new on the job.

My subjects were women who had made courageous, if self-centered, decisions, feeling they owed no one else but themselves any explanation.

Their sense of courage lay in that they did so, unprevented by any or all of the usual considerations of age, gender, wifehood and motherhood. I may have myself found kinship with them: I had just become separated and taken up a not-so-usual job.

I was working on my fourth subject, Lupita Aquino-Kashiwahara, who had just come home from the US, where she had made her home with second husband Ken, a Japanese-American broadcast journalist. An appointment had been made for the interview for Aug. 22, 1983.

On the 20th, my interview was called off, a development that for me lent credence to rumors that Ninoy Aquino, the dictator’s archrival, was coming home from American exile, the following day, the 21st, a day too fateful for anything else to be accommodated too close around it, especially for Lupita, a sister of his.

Well, Ninoy did come home, as rumored, to his martyrdom, as feared, and the rest is history.

With friend Bebe Lontoc (now gone), who also wrote for Woman’s on family finances, I ended up a deservedly forgettable collateral casualty myself, unceremoniously retrenched. I published here and there after that but only occasionally, and now, after another 30 years, I’m here writing again weekly, picking up, you might say, where I left off.

On Monday, Aug. 26, my husband and I met up with a group of journalists for breakfast at the Aristocrat on Roxas Boulevard at 7:30 to be on time for the pork-barrel protest march at the Luneta at 9. We were to park there, eat, and march from there.

Memories of marches for Ninoy and his wife, succeeding torchbearer Cory, came flooding back, memories that made me realize my feet and legs were now 30 years older. Friends with no illusions about their capabilities had checked in the night before at the Manila Hotel, a mere hop away, while others decided to drive there early for breakfast. I was told the hotel had prepared an extra-generous buffet spread at the lobby.

Up to the time of the march, it was unclear who had organized it, not that it mattered—people’s outrage was begging to be expressed. Not a few friends, to my surprise, called to make sure we were not marching against P-Noy, lest they become identified with his enemies.

I could only assure them that I, for one, was not marching against or, for that matter, for him. In fact, choosing from umbrellas in our car, I innocently drew a yellow one, with Noynoy’s name yet on it, and had to buy a neutral bluish-gray on the road.

But more than anything, I marched to be counted and identified as one of the multitude of bosses to turn up and build a critical mass of clamorers for some bad guys to be put behind bars.

I still think it could happen on this watch. P-Noy’s presidency feels like a part of the righteous workings of some unseen hand. I quite like the idea.

Indeed, I believe it’s important that, within his tenure, key guardians of the democracy his mother helped restore, like the proper chief justice he appointed, be installed.

But looking at the great number of bright-faced people—in contrast to Edsa’s grim-faced ones—and with sandwiches to go around, it was easy to forget the seriousness of the issues at hand and slide into picnic mode.

To be sure, some sense of history was evoked, but still there was a certain lightness lent to it. A cheering crowd of young people pulled us from our comfortable seats for a round of chanting reserved especially for us. With no disrespect intended, I’m sure, they led us through, announcing, “Sila muna—sila ang mga original ng Edsa!”

I had always thought the honor belonged to the Delgado sisters, until I realized they themselves were now represented by some of their children. The sisters certainly have earned their well-deserved retirement from the streets, and I guess we now have to step up.

Walking back, I realized how far we were from the Aristocrat, and that we just needed a break for our missed merienda and lunch and a bathroom stop. Thirty years is, indeed, a long time from Edsa, and yet, except for my bones, little seems to have changed. Election results, for one thing, remain questionable. In the words of Gus Lagman, a man who should know, these appeared “too perfect” in certain cases to be true.

And yet, if there’s anything we should secure, it’s the electoral process. That’s why, when an election lawyer was appointed to the Commission on Elections by P-Noy himself and Lagman himself was eased out, my disillusionment in politicians and political institutions became very nearly complete. If I have learned anything in these 30 years, it’s not to put my faith in either.

So marching is the least I can do, and even as my old bones can take less and less of it.