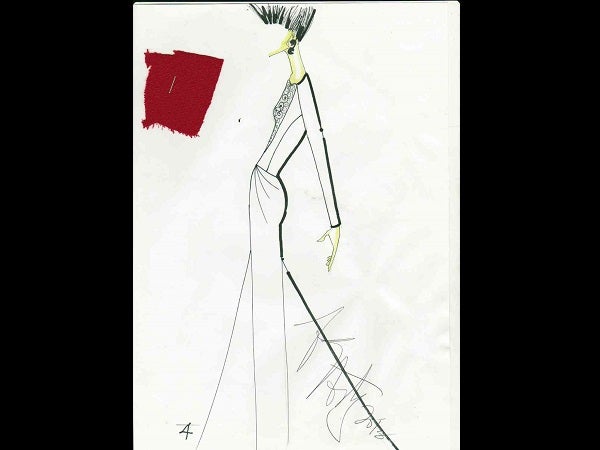 When Randy Ortiz and the organizers of his 25th-anniversary gala were picking dates for the show, the fashion designer had his heart set on Sept. 26, as it held a special meaning for him. It is his late father’s birthday, and also his mom’s death anniversary.

About a decade ago, Ortiz’s parents passed away two years apart of each other.

However, it’s not grief and loss that the designer associates with that date, but the beautiful narrative that is his parents’ love story.

“They loved each other so much. I feel like my dad came to escort my mom to heaven, because she died at 12:01 a.m. on his birthday,” Ortiz says. “That’s why my show’s title is ‘Randy O Silver: Heaven on Earth.’”

His chosen date, however, ended up being unworkable, and he has settled for Sept. 28. He will present an all-new, 60-piece collection, plus some menswear. It is the last of 2013 Face-Off, the fashion series presented by Samsung, Inquirer Lifestyle and LOOK Magazine.

The 2013 Face-Off will also be presented with Champion Infinity. It will be  at the Peninsula’s Rigodon Ballroom, directed by his best friend Jackie Aquino.

“It’s not a retrospective,” he clarifies. “I’ve been working on this for a year, and I had told Jackie I really wanted to do a silver-anniversary show” even before he was approached by Face-Off.

“I’m sticking to my sensibilities, but I’m doing things that I don’t believe I’ve ever done, like the play of silhouettes. I’m working on four to six silhouettes.”

The man who made a name for über-romantic and feminine wear—and has a stellar clientele that includes the likes of Lucy Torres and Kris Aquino—will send out clothes with a little more structure than his typical look; for instance, a tailored jacket as a counterpoint to an ultra-feminine dress. While there will be a few chiffon pieces, shifts and serpentine dresses, guests will also see pantsuits.

“I usually make clothes that are cut close to the body,” he says, “but for the show, there will be waisted, voluminous skirts. I’ve also experimented with different sleeve patterns. It will be a peek into my Spring-Summer 2014, and my mixture of different pastel colors.”

He adds, “This is a really exciting time for me. I’m using a lot of organic materials, like piña, cocoon, brocade, laces. There’s a lot of play on embroideries—different incarnations, patterns and techniques… I’m using straps to form patterns. There’s crochet, handmade appliqués and cutworks.”

Apart from Aquino, Ortiz’s main collaborator for his milestone shows—“Jackie and I are very connected; he knows me from head to toe, so communication is easy”—the designer has other close friends helping him behind the scenes. There’s the artist Doltz Pilar, who’s in charge of the stage, the florist Robert Blancaflor, and the “señoras,” the moniker for a past generation of catwalk divas like his barkada, Tweetie de Leon-Gonzalez.

De Leon-Gonzalez, et al., however, will not walk the runway this time. “On my 20th anniversary, it was all the señoras. This time, I want to celebrate the new batch of supermodels, although Maricris Perez will come home from Tampa to walk for me. Of the señoras, only Maricris and Marina [Benipayo] will model. Tweetie and the rest will be my muses.”

Ortiz describes the gala as a “feel-good show, just like a movie,” and the clothes he describes as “classics, just what I imagine my mom and my dad would’ve wanted to wear.” The designer is the fourth of seven children.

“The collection will not be about trends but how I envision what Filipinos want,” Ortiz says. “It will be a show of all-Filipino design and fabrics, but done in a very contemporary way.”