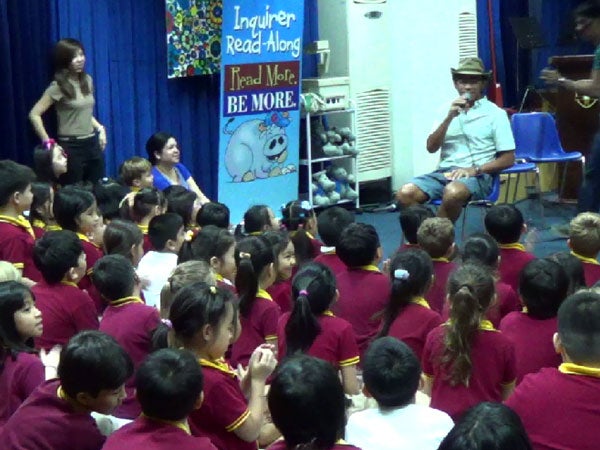 MANILA, Philippines—Close to 100 children were treated to stories about heroes and given tips on reading during the launch of the Inquirer Read-Along Caravan at the Chinese International School (CIS) in Makati last Tuesday.

The Read-Along Caravan is a series of sessions led by Read-Along Ambassadors in various Metro Manila schools in the run-up to the Inquirer’s Read-Along Festival which will be held in November at the Cultural Center of the Philippines.

Read-Along Ambassador Kim Atienza kicked off the session with Christine Bellen’s “Filemon Mamon,” a story about a child who shifts to a healthy lifestyle to be able to play the lead role in a school production.

Atienza also took questions from the children, who asked about his pets and his love of reading.

“Taking care of animals entails that you should know how to take care of each and every species, each and every breed. Whenever I have a new animal, I make sure that I read about it,” said Atienza, who regaled the kids with stories about his dogs, reptiles, birds and fish.

Atienza also shared how reading contributes to his job as ABS-CBN’s resident weatherman. “Forecasting the weather gets more sophisticated. I do a lot of reading on satellites, new equipment, new weather systems, global warming and climate change,” he said.

“It’s amazing how reactive kids can be,” said Atienza after the session. “I was not expecting a reaction this intense—they were so focused, it was like they were watching a movie. They were so quiet. It was surprising,” he added.

Atienza, whose wife Fely owns CIS, has visited the school several times, but this was the first time he read a story to the students. “As an adult, you forget about simple joys and thrills like reading a good book. The kids today were inspiring. It’s the first time I read to them. It’s a different experience—it takes more sophistication to read a book. When I bring my pets, the reaction is very outward. That’s easy. But actually reading a book and making them listen and react to the story is something else.”

As a reading ambassador, Atienza said he hoped the CIS kids would read more. “I always say this: The mind is like a muscle and it needs to be worked out. It’s like going to the gym. And by that I mean quality reading. You have other types of reading like Twitter and Facebook—that’s not quality reading. Quality reading is when you sit down and actually read a book. It’s like working out the muscle. The stronger the muscle gets, the smarter you become.”

Atienza also took pride in his own children, who are avid readers. “When we go shopping, when they ask for toys we say no, but we tell them if they want a book, they could buy two or three,” he said. “They’re already very passionate about reading. I don’t have to force them. I just facilitate the passion that they already have.”

“I think that reading and literacy are a big thrust for our kids. As early as the pre-Kindergarten level, the 4-year-olds, they all have reading logs. We really encourage reading as a springboard for curiosity and to develop that life-long passion for learning,” said Fely Atienza, who added that CIS had a two-level library with some 16,000 books and a steadily growing e-books collection as well.

Ten-year-old Lucas Batungbacal was among the kids who attended Tuesday’s session. “I learned a lot of things, it was really nice. The stories were interesting. I learned that reading is good and that if you read a lot, it builds the information in your head. Reading really helps you,” he said.

His classmate Annika Ching Laude, 10, also enjoyed the session. “Reading is not only important to kids who love to read—it is also very important to those who like to write,” she said. “I liked both stories. I like how reading always gives me surprises,” she added.

For 9-year-old Aidan Wells, the session showed him a lot of new things. “I really enjoyed the reading, especially Kuya Kim’s story. I learned that junk food can cause you to tire easily and can make you sick,” he said.

Wendy Wycherley, director of the Lower School at CIS, also enjoyed the session. “There’s just something magical about sitting down and telling stories. Forget technology, this is so much more powerful. It pulls students in. This is something we’d like to establish in our school. We think we’d like to make it a tradition that we bring the kids together every so often to tell them a story. It’s old-fashioned, but it works. It creates a beautiful feeling.”