How to tie the knot of style | Inquirer Lifestyle ❮ ❯ 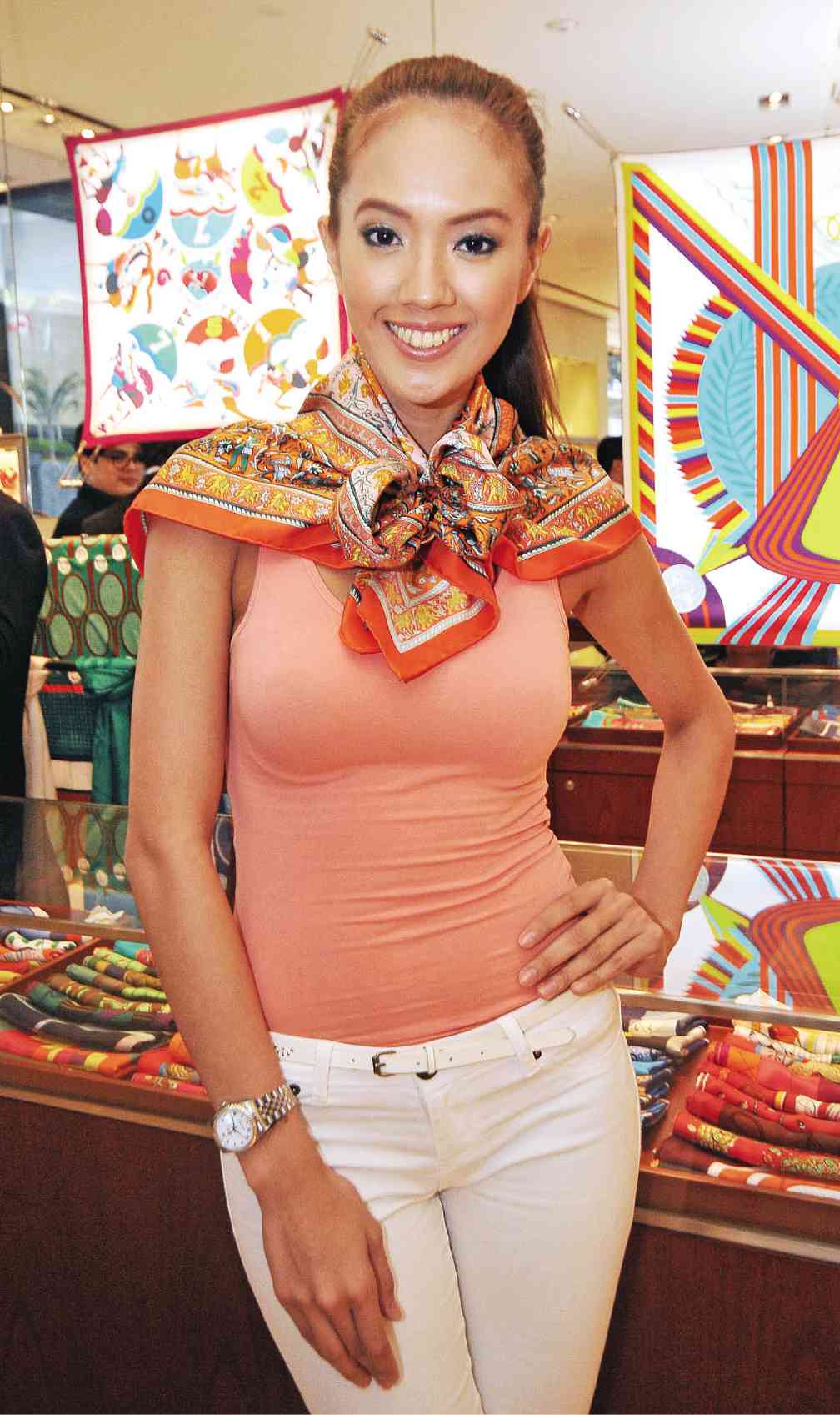 A CHIC way to keep your shoulders warm

How to tie the knot of style

The Birkin may be the most iconic item in an Hermes boutique, but the most saleable is one of fashion’s most timeless staples: the Hermes silk scarf.

The legendary French luxury house reportedly sells a scarf every 25 seconds, and those fine, silk-screened works of art have adorned the heads of such beauties as Jackie Kennedy, Audrey Hepburn, Grace Kelly, creatures of a bygone era when it was chic to simply tie those luscious silk squares under the chin.

Your granny may still wear her Hermes carré like Jackie, Audrey and Grace did, but that style may no longer cut it for you or Hermes’ current customers. Therefore, Hermes comes up with news ways to celebrate one of its most coveted products.

At the recent “Be Star in Silk” at the Greenbelt 3 boutique, models Valerie de los Santos and Justine Gabionza took turns demonstrating to media creative new ways to wear the scarf. It was the second such event since Hermes opened in Manila in late 2009. (Late last year, it hosted the “Swinging Silk” party, where the venue was adorned with Hermes scarves, floor to ceiling.)

There was “The Twist,” where the silk square is folded pli de base—each purchase of a scarf comes with box of “Knotting Cards,” with illustrated ways to wear the scarf, including the basic first-step fold called pli de base—and tied in a bow around the neck.

There’s also “The Bow,” a variation of “The Twist,” and, possibly one of the easiest to imitate, “The Knotted Silk Necklace,” which follows the pli de base and creates    three separate knots

along the width of the silk and tied around the neck for a nifty neckpiece.

The models demonstrated styles not included in the Knotting Cards box. They also showed variations of the scarf worn as a top. Some called for scarf rings, which are sold separately. And they also showed new ways to wear the silk as headscarf.

While we have yet to encounter a Filipina with a notable Hermes scarf collection, we certainly have read of accounts of women who are rabid in their pursuit of certain coveted designs to add to their silk collection. (Author and former Hermes buyer-reseller Michael Tonello wrote of those women in the autobiographical “Bringing Home the Birkin.”) Interestingly, Mario Katigbak, the brand’s country manager, limits the number of pieces per design in the store.

An Hermes scarf doesn’t come cheap—it retails an average of five figures—but it certainly is worth every cent.

The Hermes scarf was first produced in 1937. It takes about 18 months to produce a single design, and everything is made by hand from start to finish in the Hermes workshops outside Lyon in France. Lyon is famous for its silkscreen process.

Hermes scarves have an average of 27 colors each, though more intricate designs have more. A 40-color design, for instance, will need 45 silkscreen frames. After printing and engraving, which alone can take hundreds of hours, the silk scarves are cut and hand-rolled and stitched around the edges by seamstresses, in a process called French hand hemming.

Hermes works with independent artists, who are reportedly paid royalties from the sale of their scarf design. While Hermes customers wear their scarves as a fashion accessory, some are known to frame and hang them on walls as the works of art that they are.