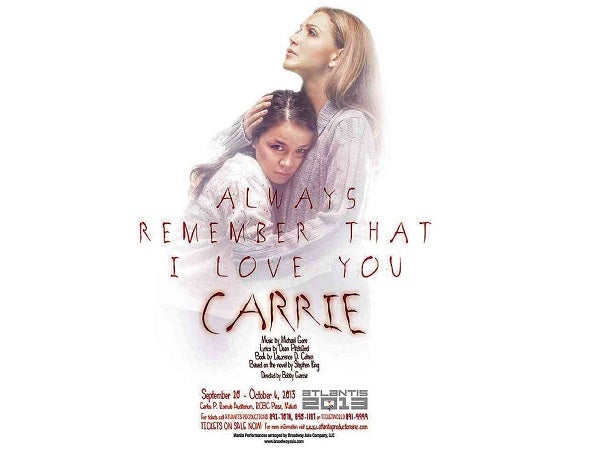 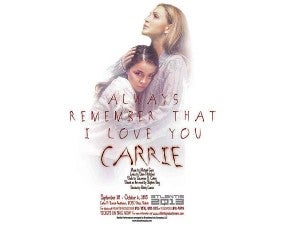 Atlantis Productions will stage the suspense-horror musical “Carrie” in the weeks leading up to Halloween.

The musical is based on Stephen King’s best-selling novel (first published in 1974) about a girl who is bullied in school and suffers under a cruel mother. She soon discovers a special power that she wields over her tormentors.

An upcoming film adaptation has Julianne Moore as Carrie’s mother and Chloe Grace Moretz (“Hugo,” “Kick-Ass,” “(500) Days of Summer”) as Carrie. Prior to this version, there was a 1976 film adaptation directed by Brian De Palma, starring Sissy Spacek in the title role.

The musical version debuted on Broadway in 1988 with book by the film’s screenwriter Lawrence Cohen, music by Michael Gore (“Fame,” “Terms of Endearment”), and lyrics by Dean Pitchford (“Fame,” “Footloose”).

The 1988 version was critically panned and closed after only five performances. The incident was notorious enough to be immortalized in the title of Ken Mandelbaum’s book “Not Since Carrie: Forty Years of Broadway Musical Flops.”

Last year, a reworked version by the original collaborators was staged on a limited engagement Off-Broadway, earning numerous nominations from different award-giving bodies.

Atlantis is staging the 2012 version. “It is a beautifully tragic retelling of the Cinderella story with an amazing Broadway pop score,” says Atlantis’ artistic director Bobby Garcia, who is directing the show with Jamie Wilson as assistant director and Ceejay Javier as musical director.