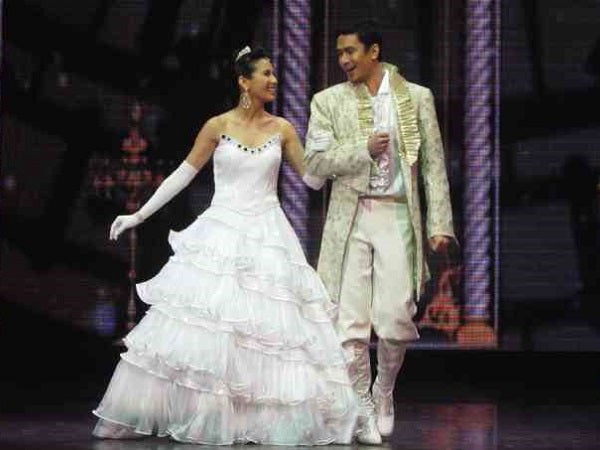 It’s ‘Cinderella’–and Resorts World Manila is having a ball

Originally a TV production, Rodgers and Hammerstein’s “Cinderella” is not considered one of the duo’s best works. In fact, it cannot be compared to, say, “Carousel” or “South Pacific.” But it has some tuneful melodies worthy of the Rodgers and Hammerstein canon, like “In My Own Little Corner” and “Do I Love You Because You’re Beautiful.”

The last (or first) time Manilans saw this show was in 2008 in an Australian production at the Cultural Center of the Philippines, with Lea Salonga paired off with an Australian actor a head taller than her.

And now the dear old warhorse will be presented again in Metro Manila with an all-Filipino cast, and given the lavish, big-budget treatment by Resorts World Manila. The musical opens Oct. 9 at RWM’s Newport Performing Arts Theater (Tel. 8366000 local 7839; www.rwmanila.com).

Music is by The Manila Philharmonic Orchestra.

This was announced in a recent press conference-preview of the production at the RWM theater, hosted by actress Menchu Lauchengco-Yulo (who plays the fairy godmother) and director Michael Williams.

The stars are Karylle as Cinderella (with Julia Abueva and Justine Peña as alternates) and Christian Bautista as Prince Charming (with Fred Lo) as alternate.

I remember Karylle and Bautista when they played the tragic lovers in “West Side Story” a few years ago at Meralco Theater.

(Karylle’s boyfriend then, Dingdong Dantes, arrived before the show to applause and, to my discomfiture, was led to the seat right next to me. I pretended not to notice him. Then a more affable and sophisticated seatmate, a friend, leaned over and engaged the superstar in small talk.)

The RWM preview contained brief highlights of the show, opening with a full production number with the cast dancing and announcing joyfully that “the Prince is giving a ball!”

“The play is full of magic and wonderful things. This is just a peek. We didn’t want to give you too much,” said Lauchengco-Yulo.

“It’s a huge production, a work in progress,” said Williams. “We are constantly refining. We want to maintain a magical quality.”

The director said this production was based on an adaptation of an old Chinese version. Thus, “Cinderella is passive, not confrontational. She is a battered and abused person. The moral is that good is always rewarded, and we are underscoring this.”

Explaining his role, Bautista observed that “I am here to support Cinderella. At the beginning the Prince is looking for independence, not love. He’s hoping for his parents to trust him. But in Act II, there is a shift and all that love explodes!”

The budget for “Cinderella” is said to be even bigger than last year’s “The King and I.” As Colin Kerr, RWM’s chief entertainment officer put it, “Every year we add more and more into a production. You don’t have to go to Broadway or to London, just come here.”