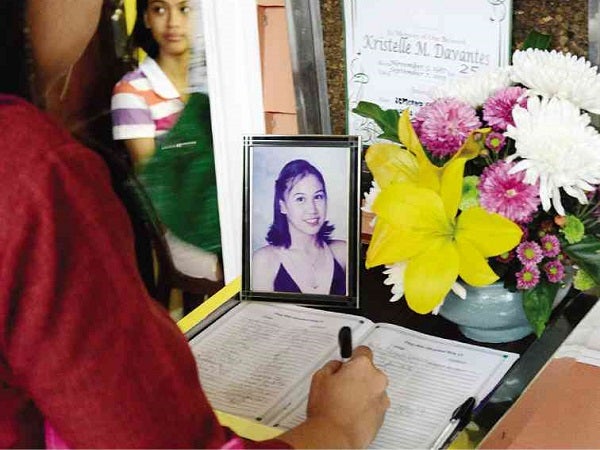 A FRAMED photo of Kae is on display during the wake at her house inMoonwalk Village, Las Piñas. JOSEPH AGCAOILI

YouTube videos, new iPhones and a cry for justice

That twerking girl on fire? Not real. The girl was a stuntwoman hired by Jimmy Kimmel, who pranked the Internet by pulling off this YouTube hoax. Not funny, Jimmy. We’re really over twerking now.

‘Is this real wife?’

But here’s our favorite YouTube clip of the week: Fresh from a surgery, a woozy Jason Mortensen looks at the woman standing beside his bed and says, “Did the doctor send you? Who are you?”

His reaction was priceless. “You’re my wife? Holy sh*t! Dang!” And later: “Oh my God, I hit the jackpot!”

The video, which was uploaded by Jason himself, is both hilarious and sweet.

It’s final. Forget about the short lists. Dakota Johnson and Charlie Hunnam have been cast as Anastasia Steele and Christian Grey in the movie version of the E.L. James best seller. Our thoughts? Meh.

We could hardly believe it when news broke out that the residents of Zamboanga were caught in the deadly crossfire between insurgent rebels and the military. We hope and pray that the two warring forces find middle ground soon before more blood is shed.

Last Wednesday, Apple announced the release of two new iPhones: a lower-priced version, iPhone 5C, which comes in different colors and is made of polycarbonate. An upgraded model, iPhone 5S, features a 64-bit processor, better camera optics and Touch ID, where a user can use his fingerprint as authentication instead of a passcode. We’re intrigued by the fingerprint authentication, it sounds very “Mission: Impossible.”

By the time you read this, it’s been a week since the body of Kristelle “Kae” Davantes was found under a bridge in Silang, Cavite, a few hours after she said goodbye to friends following a night out at Bonifacio Global City.

At press time, police still have no suspects in the murder of the 25-year-old account manager at MRM Manila, a digital marketing agency under McCann Worldgroup Philippines. Her car, a metallic beige 2011 Toyota Altis with the plate number PIM 966, is still missing.

Kae’s murder is heartbreaking—a waste of such a young, promising life.

We join Kae’s family and friends in seeking justice. “Like” the Justice for Kae Facebook page (www.facebook.com/justiceforkae) to keep updated, and if you have any information that can help investigators, call the special investigation task group at 0919-5375799 and 0916-4381170.