Am I about to join the Sisterhood of Las Retocadas? | Inquirer Lifestyle ❮ ❯ 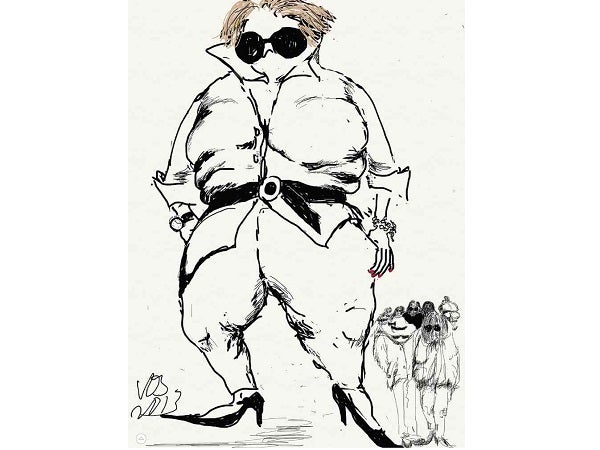 “IT’S NOT anything that can’t be remedied by a Spandex girdle, big sunglasses, and a bold sense of style.”

Am I about to join the Sisterhood of Las Retocadas?

At a drugstore senior citizens’ line, I feel my eyes pop at the sight of a heap of pills of all sorts piling up in front of the man I’m next to. He must know something I don’t—a drugstore run perhaps? I stop a gasp when I overhear the counter-girl read the bill: P11,500.

Brought to the limits of my curiosity, I ask the girl as soon as the hoarder has paid and gone: “What was that—a month’s supply?”

Once recovered from such feeling of anxious disbelief as only a fellow senior knows, I hand her my own prescription, for eye drops—one for allergy, another for artificial tears. My bill comes up to just over P200, and I say a grateful prayer.

I have just come from an eye clinic, returning a year late for a follow-up on the cataract in my left eye. Cataracts, I’m told, take time to become just right for an operation, and I came back for symptoms that had become so bothersome—itchy, tearful eyes, reading discomfort—that I thought my cataract was ripe for the picking.

To my surprise and relief, it had not notably worsened, and my eyes remained good for the glasses I’d been wearing all these three or four years.

But before I could begin to celebrate, he told me I had drooping eyelids, more pronounced on my left eye, a condition that called for another sort of specialist. He referred me to one.

“An eyelid specialist?” I asked, not un-sarcastically.

The shirred lids, quite resembling the loose fringes of crepe, hang so slack and heavy that opening my eyes causes them to spill down to mid-eye, giving me a look definitely cuter on Garfield. Under the weight, the scarce remainders of my lashes fold inward, scraping my eyes.

The eyelid specialist recommended therapeutic surgery, “not cosmetic,” he assured, although it should all the same improve my looks.

“It will make you look younger,” he promised, now sounding like a hard-sell salesman. He didn’t have to say what great cost it entailed.

Much like an interior decorator whose fee grows as he discovers more work to do as he goes along, the doctor suggested I might have my eye bags removed as well.

He proceeded to take two pictures of me, one showing me expressionless, another smiling.

I saw the picture, and have scarcely smiled since. Until then, I had not thought it possible for me to look worse than my passport pictures.

I am caught in a chain of conditions. The lids droop and my eyes, ironically because they’re dry, begin to water. The dryness also leads to sniffles, some of which drip on my throat, inducing coughing, and in no time spreads to my sinuses, giving me a headache or an infection or both.

From there the prognosis (strictly my own) darkens further, involving lungs and heart.

It’s a whole internal conspiracy to bring me down. I just have to nip it in the bud—at the eyelids. When the eyelashes started going, I should have suspected the hair was next. How clever, indeed, for the conspiracy to begin where I’d least suspect!

But going through the cosmetic-therapeutic surgery presents a problem for someone like me, a vocal advocate against cosmetic repair. I became one from observing my mom undergo it more times than she should have—if she should have undergone it at all.

I think I have developed a knack for spotting members of the Sisterhood of Las Retocadas, as has my husband with toupees and wigs and transplants on men. In fact I’m proud to have only lately persuaded a male friend against an eyelid job—at a fantastic discount.

I think what decided it for him was the story about losing one’s ability to shut the repaired eyes fully, so that surgeons themselves have to ask whether the subject is sufficiently sedated: “Tulog na ba ’to?”

How can I now turn around and, like some sneak, have the procedure done on myself?

I seek the counsel of my life’s consultant on such delicate matters, my own favorite dermatologist, about a nonsurgical alternative. As happens, there is!

Her daughter does it herself, a sort of brow-lift with no strings attached—sewn, rather. It lasts, but not forever, although, again, even cosmetic eye surgery is, more often than not, repeated every few years.

Anyway, the alternative costs less and involves no such burden of conscience as I’d have to live with if I chose surgery, not to mention the seeming addiction that goes with it, a dependence that has the patient begging for a repeat more desperately each time.

My blood test results show I’ll live—sans medication yet—provided I lose 15 lbs. I’ve put myself under the care of a dietician who thinks that, at my age, losing 10 lbs is good enough.

She assures me I would shed that in a month if I go on a daily diet of 1,500 calories. I imagine that’s the diet fed prisoners to keep them alive. Before going on it, I treat myself to two days of “last meals.”

Actually, except for the exclusion of cake and ice cream, the diet does not look bad; in fact it seems filling: three meals with three snacks in between. She shows me the size of the portions on a plate.

I’m also consoled that a small but regular intake of carbohydrates actually helps control my sugar.

All in all, I’m not in bad shape internally, anyway. There may be signs of deterioration here and there, but these seem contained. There are those of us whose enemy within has shown itself in force, a situation that calls for serious, even desperate, combat plans.

My own enemy is yet simply lurking there, like the devil who shows itself in the pieces of detail periodically uncovered—nothing that big sunglasses and a Spandex girdle can’t keep at bay.