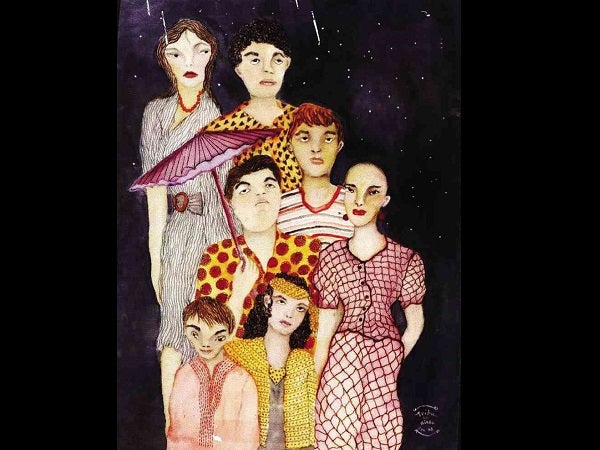 When I gave birth to my first son in 1953, my mother and her sisters were elated. My aunt brought a bilao of special pansit to my room at Doctors’ Hospital. My mother and her siblings opened it over the immaculate bed sheet above my feet and started eating it, happily offering me some at intervals. They never wondered whether I was in pain from my cesarean. I hated it, not because I was, but because it was so tacky.

When my uncle died in the early ’50s, his wake was held in their three-storey house in Malabon. It was open to friends and strangers alike, 24 hours, for all of three or four days. Cooked food flowed all day long. It was believed to be bad luck to clean or sweep the rooms in the house during a wake, so dirt piled up in corners and behind doors.

Important personages of the town all visited. Policemen, on duty or off, appeared for three meals, as did the caretakers of their many fishponds and relatives of the help.  It was a full-blown fiesta.

On the last day of every wake I have since attended, whether in Payatas or in Forbes Park, there was always a big celebration. Only much later did I learn that my mother and her sisters’ probinsyana ways were the honest-to-goodness Filipino celebrations of life and death, births and milestones.

By that time I had also learned about American ways of holding wakes. They had stiff, cheerless wakes and funerals. No one caterwauled like my female cousin, who attempted to jump into the still open grave of her father as hysterical proof of her devotion.

As little as five relatives and friends attended American wakes. There were no wreaths or endless baskets of flowers lining the walk with donors’ names prominently on their ribbons.

But it was only so much later that I began to enjoy being Filipino. It was simpler to embrace and cry than not to cry; to race to a death or a wake because all your friends would be there. It was a reunion, a social occasion. To learn, at the drop of a hat, to nibble everything from lumpiang ubod to ensaymada to lengua, lugaw and lechon without having indigestion. To send one’s savings to a needy and gravely ill friend. So when it is your turn to die, your friends will support you, too, materially or emotionally, whichever you need. They will surround your death bed so densely and lovingly you won’t have a chance to pee.

Someone may even excitedly, but mistakenly, text everyone that your soul has left your body before it really has. That should be a great death.

After coming from the wake of Julie Desiderio Villareal, one of my grandsons, Franco, said, “Magpagpag muna tayo.”  I didn’t know what that meant.

All that pagpag connoted to me was garbage food, especially leftover chicken which the very poor scavenged, literally “dusted off,” washed and refried.

Pagpag means, Franco explained, that after coming from a dead person’s ritual, you have to take a circuitous route home.  That’s so you don’t take home particles of sorrow and “bad luck” that a death connotes. So, you stop on the way home for lunch or dinner, or even just coffee and doughnuts, or you shop first in some supermarket. You leave the malas along the way. It was apparently an age-old custom which citified me had never heard of.

But why would I want to “dust off” traces of my beloved Julie from my person? She was my balae.  She had lived away in the States for the last 10 years.  We often sent long, lively texts to each other. She did not respond to the last few ones. That was uncharacteristic because Julie loved connecting.

Much later, I learned that she had been confined in the hospital and had to undergo open heart surgery. Quadruple bypass. Julie survived the operation, but while in the recovery room she had a massive heart attack. And then another. And then she was gone.

Her children had all flown there earlier when she was first confined. Now she was “home.” During the novena I heard again those passages in the Prayers for the Dead that always made me teary-eyed: “Bring her into your paradise, where there is no more grief, or mourning, or sadness, but peace and joy with your beloved Son and the Holy Spirit, forever and ever.”

I had one last gaze at Julie’s smiling picture and the urn of her ashes. Goodbye, my friend, you had a hard life. Rest in peace. See you soon.