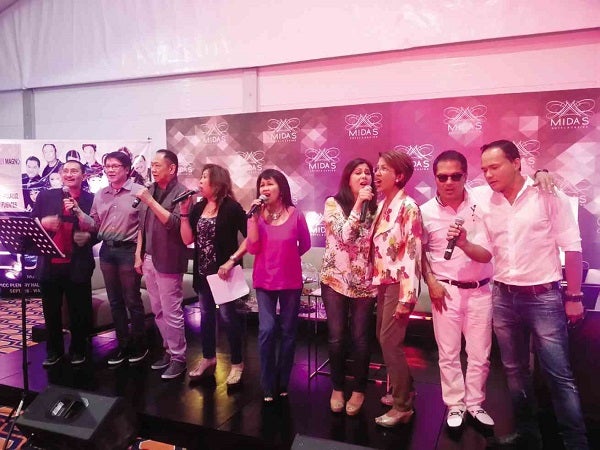 Harbor Square at the CCP complex is an ideal place to have dinner and a few drinks before watching the Circus Band-New Minstrels gig on Sept. 20 at the PICC.

For one, Harbor Square offers a number of choices for casual diners on a night out. We’ve been to Hap Chan, Teriyaki Boy, Army Navy and Gerry’s Grill, but the one we frequent is Iceberg’s—not for its halo-halo but for the Ministrone Soup and Vegetable Salad, although once in a while we also order Hungarian Sausage.

Second, it takes only about five minutes’ walk from Harbor Square to the PICC—that is, if you want to be early and not be stressed out by Friday evening traffic to catch the show.

The PICC actually has an area that serves snacks and drinks on the way to the Plenary Hall where the show will be held.

Meantime, we caught the members of both groups running through some of their repertoire before a press con last Friday at Midas Hotel to promote the show.

The stuff they were practicing was vintage soul and R&B—Four Tops (“Ain’t No Woman Like the One I’ve Got”); The Three Degrees (“When Will I See You Again”); The Temptations (“My Girl”); Marvin Gaye and Tammi Terrell (“Ain’t No Mountain High Enough”).

In the early 1970s we were in grade school when the Circus Band was a top act along nightclub row on Roxas Boulevard, and still too young as a high school kid to check out the New Minstrels in hotel lounges around the city. But we knew their songs because friends had turned us on to the live Circus Band album; and the Minstrels had become visible on TV.

Almost all members of both groups are now senior citizens or getting there, but apparently they’ve taken good care of themselves so they hardly look their age—save for thinning hair and a few excess pounds in some.

Before returning to Manila for good, the Minstrels’ Ding Mercado, 60, was based in Hong Kong for 15 years and worked there as a contract artist in a TV station where he hosted a variety show. “I also sang and danced, but R&B is not appreciated in Hong Kong as much, so I had to adjust to what they want,” he told us.

He said his biggest lifestyle change is that he’s now very conscious of his health: “I became a gym buff. I used to swim every day. Now I try to do biking and brisk walking. Ang hirap mag-invest ng costume ’pag mataba ka. I have very good quality costumes that I can still wear today.”

Mercado, who’s also directing the show, said that although they want to sing new songs, people would always like to hear the old stuff.

Louie Reyes, one of the Minstrels’ female vocalists, has been living with her family in the United States since the late ’90s.

“In 1997 my son graduated from high school in La Salle Greenhills,” she recalled. “He didn’t ask for anything except that he wanted to study abroad. Ngek, how’s that?”

She consulted a lawyer and was just looking at the possibility of being able to visit her son while he’s studying in the US with no hassles.

To her surprise, she was granted a visa for “aliens with extraordinary ability”; in no time she flew to California, followed by her husband and two children.

“I’m now a voice teacher to ‘American Idol’ wannabes,” she said with a laugh.

She added that she’s too lazy to exercise, “but I’m always on the go. I teach voice from 2-9 p.m. almost every day in three studio locations.

She’s likewise not too conscious about food: “I don’t want to go on a diet that would punish me; if it’s so regimented maiinis ka. But my secret is I eat salad for dinner; with salad you can have a variety of vegetables and meat like chicken.”

The Minstrels’ soul man, Ray-An Fuentes, 59, has been living in Vancouver, Canada, for the past 16 years with his wife, former Minstrels member Mei-Ling Gozum and three kids.

Fuentes, who now refers to himself an “evangelist,” said he set up a Christian ministry abroad to offer hope for Filipino communities: “OFWs work so hard and some of them are abused … I go where the Lord takes me to minister to Pinoys. But every year I visit the Philippines because there are churches here that invite me.”

His biggest lifestyle change, he said, was “quitting show biz to serve the Lord.” At first it was difficult, he admitted, “because being an entertainer was my only job. I didn’t finish school.” But his leap of faith in February 1988 has kept him happy and content for the past 25 years.

Having battled cervical cancer was a wake-up call, she said, that led her to decide to leave the Philippines in 1995 because she wanted to raise her children in a different environment.

At age 53, she admitted she’s “chubbier than before,” and her priority now is “to stay healthy, eat lots of vegetables, less processed food. I go walking and maintain a happy disposition.”

But she still accepts the occasional singing engagement, mostly in the US and Toronto.

Any chance of doing a solo show? “It’s still in the backburner. Give it another two to three years,” she said.

Perhaps the most successful solo act to emerge from the all-star group that was Circus Band was Basil Valdez. He said his priorities changed in the mid-’80s when he got sick and underwent surgery in the throat and kidney several times. “I survived, ok na ok ako ngayon,” he beamed.

As an Atenean, he followed the dictum of being a man for others and has sent 69 poor children to school. “I still have six scholars—three in Arellano, one in Miriam, one in OB Montessori, one in Cagayan Valley University,” he told us.

He has stopped eating beef and pork; his regular diet consists of vegetables, fish and chicken breast.

For exercise he goes brisk walking “pero 24 minutes lang,” due to gout and arthritis which he said runs in his family.

The Circus Band and New Minstrels Greatest Hits Reunion concerts will also have shows on Sept. 26 in University of Baguio, and Sept. 28 in Cebu Waterfront Hotel.

Still on the subject of aging gracefully, the bands that play at Strumm’s on Jupiter Street, Makati City, are proof positive that music keeps their members feel young and happy.

On a Monday night, Glass Onion does covers of Rolling Stones and other classic rock acts, with the band’s manager, Tonyboy Cojuangco, sitting in on rhythm guitar.

The album sounds dynamic and effusive in a sophisticated way, but we’ll tell you more about it after we catch Kiss the Bride’s series of gigs on Sept. 17 in Strumm’s; Sept. 21 in Long Bar, Raffles Makati; and Sept. 25 in [email protected]