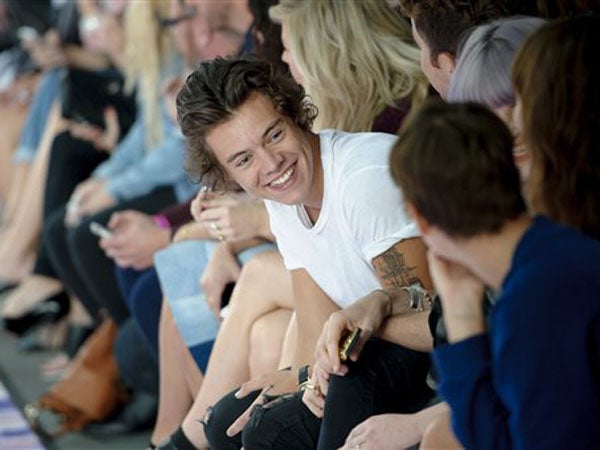 LONDON – One Direction star Harry Styles was in the front row at the House of Holland catwalk show on Saturday as the British label injected some Latin heat and attitude into London Fashion Week.

The pop star looked on as models strode down a cloud-printed catwalk in the top floor of a Soho car park, street-ready in bright colors and bold prints and energized by a pumping soundtrack.

Designer Henry Holland said he took his inspiration from a “trip to balmy Mexico City by way of the tattoo parlors of Venice Beach,” where “the stench of tequila and petrol is thick in the air.”

A rose tattoo motif linked the outfits, printed onto fluorescent orange or pink dresses, sewn into sexy skin-tight lace or laid into a cloud pattern and embellished with iridescent crystal.

Fierce but feminine, there were checked frocks in blues and oranges, a tight red and orange skirt, an orange bomberjacket and a white leather jacket with a print of the Virgin Mary on the back.

Holland even created coordinated leather holsters for his so-called “Homegirls” to store their keys and phone.

The designer has long been a favorite of Britain’s ‘it’ crowd and Styles had to squeeze in next to Kelly Osborne, singer Ellie Goulding, socialite Pixie Geldof and fashionista Alexa Cheung.

“It was good, he did very well, I liked it,” the pop star said afterwards, looking slightly out of place among the fashion pack in a white t-shirt and black jeans with holes at the knees.

Holland was the highlight of day two of the five-day London event, which showcases global British brands alongside up-and-coming designers.

Popular trio Sister by Sibling is one of those labels that have developed a reputation for fun, and this season took its inspiration from 1950s American suburban housewives – but with a twist.

But their clothes are never prim, and other models wore pink sweaters bearing the words ‘Lead Sister’ and ‘Happy’ tucked into tiny denim shorts, while loose knit skirts and tops left very little to the imagination.

Across town, Orla Kiely also turned to a traditional image of womanhood for her collection – the girl guides.

Models clad in cute animal-print outfits, long socks and berets engaged in badge-worthy activities such as camping and painting against a backdrop of the African savannah installed in an artists’ studio in Covent Garden.

They wore little dresses and skirts with safari pockets, printed with stylized images of zebras, lions, giraffes and rhinos.

“We started off wanting to do a bit of a safari, 1970s, girl guide thing,” the Irish-born designer told AFP, adding: “It’s kind of cute.”