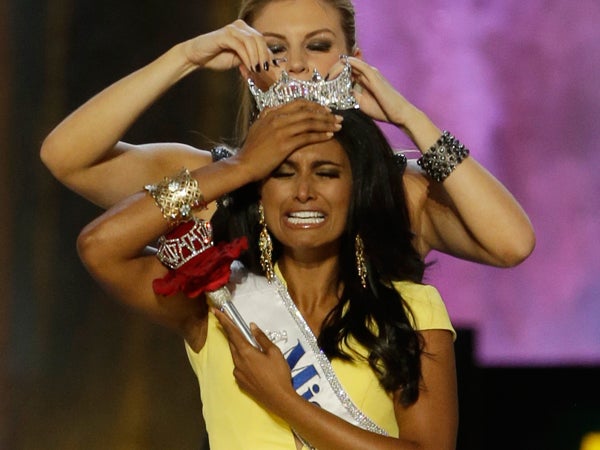 She succeeds another Miss New York, Mallory Hagan, whose tenure was cut short when the pageant moved back to Atlantic City after a six-year stint in Las Vegas, where winners were chosen in January.

After the traditional frolic in the Atlantic City surf Monday morning, she will head to the scene of a devastating boardwalk fire in the New Jersey communities of Seaside park and Seaside Heights on Monday afternoon.

The pageant had pitted 53 contestants — one from each state, plus the District of Columbia, Puerto Rico and the U.S. Virgin Islands — in swimsuit, evening gown, talent and interview competitions.

Much attention had been given to Miss Kansas, Theresa Vail, who is believed to be the first Miss America contestant to openly display tattoos. She has the Serenity Prayer on her rib cage and a military insignia on the back of a shoulder. While other contestants wore glamorous costumes and elaborately decorated footwear during Saturday night’s “show-us-your-shoes” parade on the Boardwalk, Vail wore camouflage gear and Army boots.

In a Twitter message Sunday, Vail wrote: “Win or not tonight, I have accomplished what I set out to do. I have empowered women. I have opened eyes.”

Vail made it to the Top 10 and won a nationwide voters’ choice award propelling her into the semi-finals.

Another noteworthy contestant was Miss Florida, Myrrhanda Jones, who made it into the top 5 while wearing a bejeweled knee brace. She tore ligaments in her knee while rehearsing her baton twirling routine on Thursday. Sunday night, she performed the routine flawlessly.

The pageant started in Atlantic City as a way to extend the summer tourism season for an extra weekend.