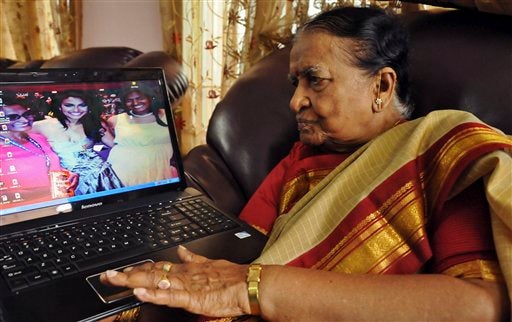 The first Indian-American winner of the quintessential American beauty pageant had predicted that times were changing even before her victory.

“Miss America is evolving. And she’s not going to look the same anymore,” said Nina Davuluri.

Davuluri whirled through a Bollywood dance in a sari, showed off her nut-brown skin in a bikini and championed the kind of diversity that made her milestone seem inevitable.

But when America already has its fair share of Indian-American governors, CEOs, scientists, actors and other high achievers, why did her victory make such a splash among those who rarely pay attention to the contest?

For many Americans of Indian heritage, it showed the unique promise of America, the way the nation and its new immigrants are responding to each other — and the challenges that remain as America changes in deeper ways than black and white.

Amardeep Singh, an English professor at Lehigh University, said Miss America is a symbol of national identity, a person who represents society as a whole. So when an Indian woman wins, “that really resonates.”

Even though there was some racially-charged online criticism of the choice, he said overall, “America is willing to accept and celebrate her version of beauty.”

“It’s a relatively new phenomenon that Indian-American women would even think of themselves as potentially having a chance,” Singh said. “It’s the way things are changing in America. The Indian community is becoming more comfortable in its skin.”

And Indian-Americans, especially those born here like Davuluri, are demonstrating a newfound comfort level in their country. “I always viewed myself as first and foremost American,” Davuluri said after her win.

There have been seven black Miss Americas, starting with Vanessa Williams 30 years ago. A Hawaii-born Filipina won in 2001. But Davuluri’s win drew attention “because it’s so different,” said Lakshmi Gandhi, editor of the Indian-American blog TheAerogram.com

“I grew up in the States, and I would never have thought of an Indian Miss America,” she said. “That’s why people are so excited, they’ve never seen this before.”

Gandhi said Davuluri’s choice to perform a Bollywood dance in the talent portion of the contest struck a chord with other Indians. That, and the fact that Davuluri’s skin tone is a bit darker than what Indian culture often considers beautiful.

“I don’t see a lot of darker Indians in Bollywood, in movies, so that is something I noticed,” Gandhi said.

Many observed that Davuluri’s skin tone would be too dark for her to win a Miss India pageant — so it said something special about America when it chose her as an ideal beauty.

“The United States, at the end of the day, is a country that represents diversity and inclusion and a sort of coming together of the world in some of the most incredible ways,” said Mallika Dutt, founder of the human rights organization Breakthrough.

But Dutt also pointed out that Davuluri’s milestone landed in the middle of a heated national debate on immigration, national identity, and who is — or should be — an American.

“So having an Indian-American win this very symbolic moment is challenging some very fundamental notions of American identity in a way they haven’t been challenged,” Dutt said.

That challenge was evident in a smattering of racist tweets in the wake of the pageant.

“That’s an important angle to the story,” said Deepa Iyer, executive director of the advocacy group South Asian Americans Leading Together. “It just reflects the racial anxiety that some people have in this country when someone who looks or sounds different achieves a level of success that for some reason is seen as being reserved for a certain type of quote-unquote Americans.”

Vandana Kumar, publisher of India Currents magazine, likened those racist tweets to some of the racial resistance faced by President Barack Obama: “When people of different races break barriers, we get some scrutiny, some pushback.”

But ultimately, she saw Davuluri’s win as a sign of promise.

“This sounds so cliché, but if you set your heart to do anything, don’t let your skin or your religion or anything hold you back,” she said. “I loved the fact that she proved that the best woman wins.”

The second-best woman in this year’s pageant? Miss California Crystal Lee, who is Chinese-American.