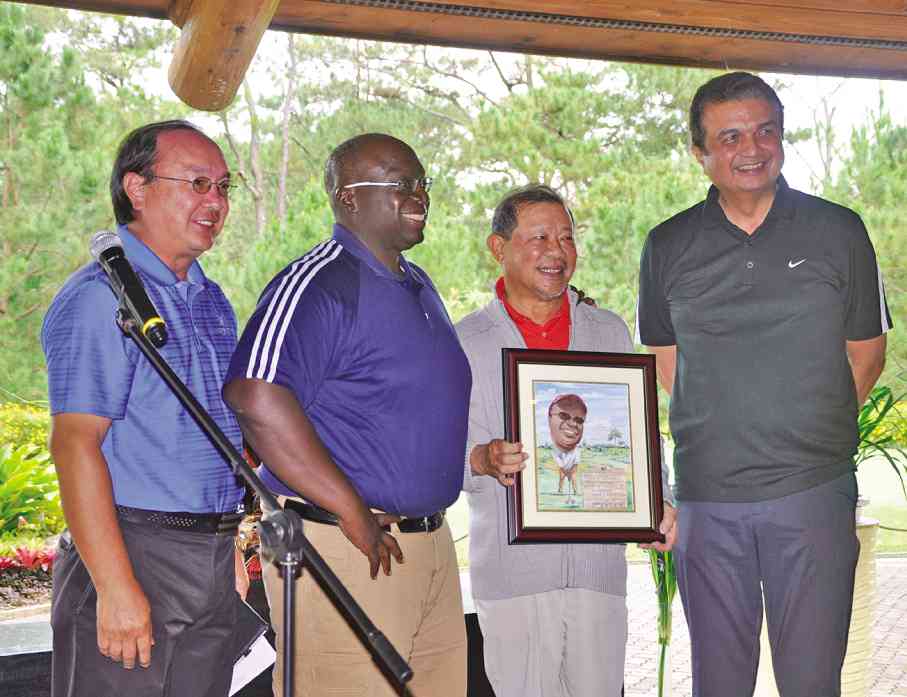 Camp John Hay recently hosted a farewell party and golf tournament for outgoing US Ambassador Harry Thomas Jr. More than any other envoy to the Philippines, Thomas has created extraordinary ties to the country and will depart with his Filipino ladylove, exotic beauty Mithi Aquino, naturellement.

The amiable and très popular Thomas had said in a number of gatherings how he loves Baguio and Camp John Hay, after the successful golf tournament held in his honor, where he scored a birdie on the Par-3 15th hole, dahlings.

The farewell party allowed Thomas to have another tour of the world-class, par-69 course, redesigned by Jack Nicklaus’ Golden Bear Design International in 1998. Camp John Hay is the home of the Fil-Am Invitational Golf Tournament, listed in the Guinness Book of Records as “the world’s largest and longest-running amateur golf competition.”

Master chef Billy King whipped up a sumptuous breakfast and lunch buffet. His impeccable F&B operations is the reason why Le Chef restaurant at the CJH Manor Hotel has been repeatedly cited as one the best dining venues in Baguio City, dahlings.

Sobrepeña gifted Thomas a traditional Ifugao headdress and an Igorot wooden carving, which is a tribute to Philippine National Hero Dr. Jose P. Rizal. The artwork, made of narra, recycled materials, old coins and empty bullet shells, is a masterpiece of Cordillera sculptor Clinton Aniversario.

The Ifugao headdress, traditionally worn by clan chiefs during special rituals, is a grass-woven frame decorated with feathers and ornaments such as tusks, beaks and wooden figures. The ambassador proudly wore it during the party.

Bon voyage and good luck, Ambassador Thomas! The Philippines will surely miss you!

This year’s Clear Dream Match held recently at the University of Makati was an intense head-to-head battle with the final score of 4-1 in favor of Team James, natch!

World Cup football champion Fabio Cannavaro (jersey no. 5 in white) and Chelsea legend Dennis Wise (jersey no. 11 in blue) showed no signs of slowing down, palangga; the international football icons gave fans exactly what they came for: a world-class game.

In the end, Team James’ players roared through the field, with their fists raised in Roman-style triumph.

Despite the strong rains that drenched the players and turned the field into puddles of mud, everyone managed to keep a “Clear” head.

Team Phil members were no less proud of their friends in Team James for the latter’s landslide victory.

Now, that the score’s even between the two Younghusband brothers, the more reason fans are excited for the future of Philippine football’s brightest stars, ’di bala, palangga?

The dynamic sports and lifestyle brand is giving Young full support as she prepares to travel to Jakarta, Indonesia, to vie for the Miss World 2013 crown on Sept. 28.

“I’m very honored to be chosen as a Fila ambassador,” she says. “Fila really fits my lifestyle because even if I love playing video games, I still do my best to stay fit and healthy with physical activities, whether it’s brisk-walking, dancing with my friends or trying out different kinds of sports.”

Born in Alexandria, Virginia, US, Young has been working in Manila for the past several years as a television and film actress. She was also chosen Miss Sports at the Miss World Philippines 2013 pageant, where Fila hosted the swimwear competition.

“Fila is honored and very happy to have Megan join its roster of ambassadors,” says Maricris “Cris” Albert, president and CEO of Fila Philippines. “Our ambassadors reflect and personify the same values of active excellence that Fila embodies.”

Fila also has the Philippine National Rugby Union Team, aka the Philippine Volcanoes, in its roster of ambassadors; Fila is sponsoring the team in the Rugby World Cup Sevens in Moscow.

Fila  has 300 outlets, and 20 more are scheduled to open this year.