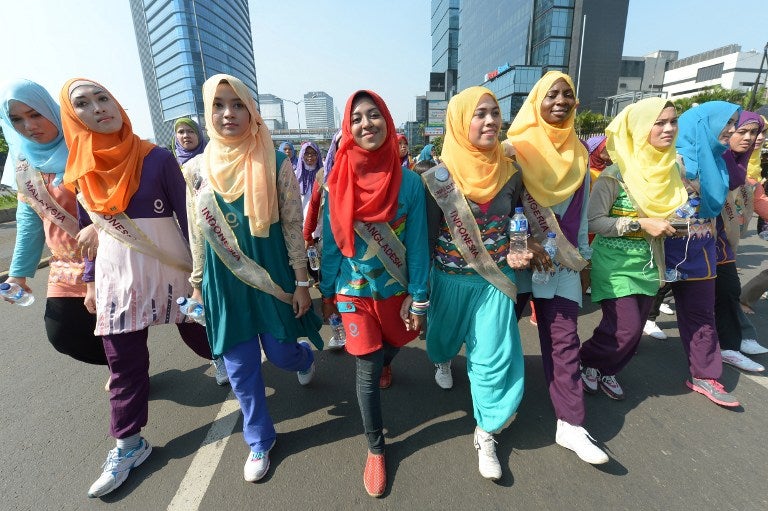 Contestants of the World Muslimah contest take part in a fun walk in Jakarta on September 15, 2013. The Muslimah World contest to be held on September 18 in the Indonesian capital, Jakarta, is "Islam's answer to Miss World", the pageant's founder Eka Shanti said. AFP

JAKARTA — The finale of a beauty pageant exclusively for Muslim women will take place in the Indonesian capital Wednesday, in a riposte to the Miss World contest in Bali that has drawn fierce opposition from Islamic radicals.

Twenty contestants will show off the latest Islamic fashion trends in the Muslimah World pageant and will also take part in other activities, such as reciting the Koran, aimed at demonstrating their piety.

“We’re just trying to show the world that Islam is beautiful,” said Obabiyi Aishah Ajibola, a 21-year-old contestant from Nigeria, one of six countries represented at the pageant.

“We are free and the hijab (Muslim headscarf) is our pride.”

The contestants — who can only enter the competition if they wear a headscarf — have undergone three days of “spiritual training” in the run-up to the final in Jakarta, waking up before dawn to pray together and sharpen their Koranic reading skills.

Organizers say they want to show Muslim women there is an alternative to the idea of beauty put forward by the British-run Miss World pageant, and also want to show that opposition to the pageant can be expressed non-violently.

Organizer Eka Shanti, who founded the pageant three years ago after losing her job as TV news anchor for refusing to remove her headscarf, bills the contest as “Islam’s answer to Miss World.”

“This year we deliberately held our event just before the Miss World final to show that there are alternative role models for Muslim women,” she told AFP.

It is a starkly different approach to the groups of Islamic radicals who have taken to the streets in recent weeks to protest Miss World, denouncing the contest as “pornography” and burning effigies of the organizers.

Despite a pledge by organizers to drop the famous bikini round for the pageant in the world’s most populous Muslim-majority country, radical anger was not appeased and the protest movement snowballed.

The government finally bowed to the mounting pressure and ordered the whole three-week pageant be moved to Hindu-majority Bali, where it opened on September 8.

Later rounds and the final, on September 28, had originally been scheduled to be held in and around Jakarta, where there is considerable hardline influence.

While beauty is very much at the heart of Muslimah World — contestants’ height and weight is shown on the pageant’s website and it is sponsored by a halal make-up brand — the contestants’ piety is also a big factor.

More than 500 contestants competed in online rounds to get to the final in Indonesia, one of which involved the contenders comparing stories of how they came to wear the headscarf.

On Wednesday night, contestants will retell these stories and answer questions from judges at the final in a Jakarta shopping mall, and the 20 finalists will be whittled down to four before a winner is crowned.

“What I will be looking for is strength of personality — someone with a vision for the future, who gives back to their community and shows that beauty is not just about bodies,” said Jameyah Sheriff, an education expert from Malaysia who is on the judging panel.

Shanti said the contest was first held in 2011 and was then only open to Indonesians but it proved so popular that it was opened up to international entrants.