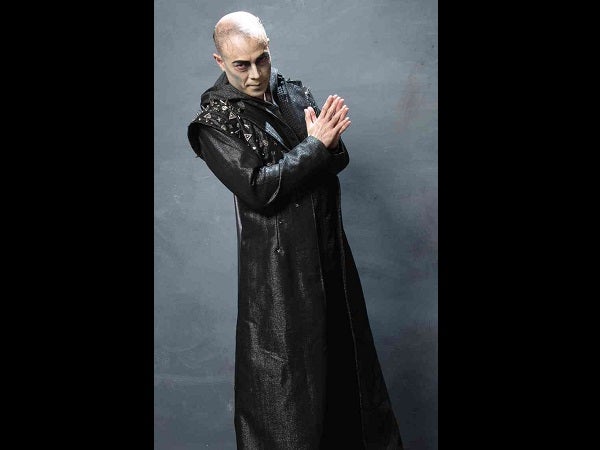 Trumpets returns with splashy new musical ‘The Bluebird of Happiness’

Intentional or not, Trumpets’ big musicals start with or are triggered by a journey.

“Joseph the Dreamer” had its titular Biblical hero literally being dragged from his homeland into enslavement in Egypt. The lovestruck little mermaid of the play that bears the same name forsook her heritage in the oceans to find her destiny on solid land. “The Lion, the Witch, and the Wardrobe” transported its four child protagonists from war-torn England into the magical landscape of Narnia.

Now the Christian theater company is at it again, this time with a musical adaptation of Belgian playwright and philosopher Maurice Maeterlinck’s (1862-1949) classic play, “The Bluebird of Happiness.”

In the original 1908 version which was staged in six acts at the Moscow Art Theater, Tyltyl and Mytyl, the children of a poor woodcutter, are guided by a fairy into a quest around the world to search for the bluebird of happiness, which apparently could grant them their hearts’ desires and give them everlasting peace and joy. This search soon leads them into many adventures, some fun-filled, others dangerous, while their little band brings in allies and friends who help them fight against their enemies.

Like all past big-budgeted Trumpets productions, this one will be energized by a huge cast (in “Bluebird’s” case, a 50-member ensemble), engaging musical numbers, state-of-the-art production design and a family-oriented message.

All the Trumpets productions mentioned above were also coming-of-age stories where heroes and heroines learned their lessons and brought out the best in themselves. “The Bluebird of Happiness” promises to follow in this time-tested tradition.

“It is about a journey,” says   ‘Bluebird’ director Jaime del Mundo. “Our characters journey to the past, the present and the future. The [musical] shows what they brought to the journey and how it affected them.”

The original play’s material was replete with symbolism, as Maeterlinck was one of the leaders and pioneers of Europe’s 19th-century Symbolist movement. He believed that truths in spirituality, philosophy, and life could be better conveyed by the use of allegory. This explains why the characters met by the young heroes in the Trumpets adaptation goes by such names as Light (Carla Guevara-Laforteza), Night (Joel Trinidad), and Father Time (Raymond Concepcion).

However, while Trumpets is expected to remain generally faithful to the material, the Filipino audience can expect a more familiar, perhaps homegrown approach that would resonate strongly despite the European trappings. This adaptation has been labeled an original Filipino English-language musical production, with Del Mundo writing the books and lyrics and composer Rony Fortich creating the music.

These principles may  be familiar to a modern audience, but to Maeterlinck they might have come at a price. Satisfaction, contentment and finding light in a dark situation are the stuff that define pop culture today, but they were hard-won truths in the playwright’s time.

“The Bluebird of Happiness” was written when war clouds were threatening Europe; Hitler’s Nazis would eventually occupy Maeterlinck’s native Belgium. The writer sought exile in Portugal and later the United States, where he never stopped denouncing or writing against the Nazi occupation of Europe.

Poverty, loss, alienation, and repression were not strangers to Maeterlinck, who discussed them repeatedly in his other plays and philosophical tomes. He was awarded the Nobel Prize for Literature in 1911 for his “dramatic works which are distinguished by a wealth of imagination and by a poetic fancy, which reveals, sometimes in the guise of a fairy tale, a deep inspiration …”

Light and darkness are not easy to mix in a family-friendly play like “Bluebird.” Walter Lang’s 1940 cinematic version is best remembered for lead star Shirley Temple’s performance, while the later 1976 movie starring Elizabeth Taylor suffered from miscasting, the dominance of visuals over storytelling, and George Cukor’s lackluster direction.

The aspects that may provide the balance in the Trumpets production are the constant Christian themes of hope and optimism. Del Mundo says, “Trumpets is still a Christian theater company, and we do have Christian elements in our plays.” He refers to some of the lyrics in the musical which refer to the birth of a blessed child and then adds, “The first thought that some people might have about it is the Child Jesus, but it may also refer to the children in the [musical finding] themselves.”

It has taken some time for this musical to find itself as well—approximately 16 years and 10 versions before its world premiere on Sept. 26 at Meralco Theater. Trumpets president and founder Audie Gemora had thought of creating the musical many years back, with colleague and theater stalwart Freddie Santos as the original director. Del Mundo came in later when circumstances saw Santos departing the picture.

What made this particular Trumpets production unique for Del Mundo was his writing it solo, sans his usual writing partner Luna Inocian (with whom he co-penned “The Little Mermaid” and “The Lion, the Witch and the Wardrobe”).

By the time “Bluebird” found its wings, the third part of their creative triumvirate, Lito Villareal, was already living in the States, so Fortich would eventually take on the role of composer.

“Luna is scheduled to take on the next Trumpets musical, although I can’t disclose much about it yet,” says Del Mundo.  “When we were starting out writing, we were holding each other’s hand. Now, we have found our individual voices.”

Another thing he is enthused about is the abundance of talent in “Bluebird,” with a new generation of performers getting to work with reliable veterans.  Young artists Alessa Zialcita and Chimmi Kohchet-Chua, who play Mytyl, and Anton Posadas and Guido Gatmaytan, who alternate as Tyltyl, will be performing with Mayen Bustamante-Cadd (Mama Tyl), Lynn Sherman (the pet cat Tylette), Robie Zialcita (the pet dog Tylo), Jennifer Villegas-dela Cruz (Berylune), Joy Virata (Grandma Tyl), and Steve Cadd (Grandpa Tyl).

“It’s all about the pieces falling into place,” Del Mundo.  “Every Trumpets production is a big production. ‘Bluebird’ will be no less.”