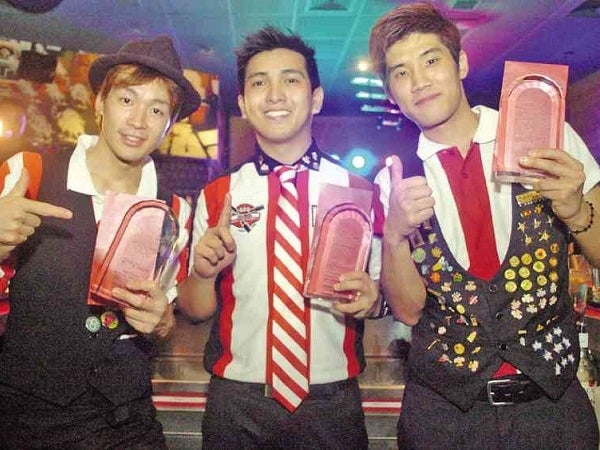 Catching vodka in the air

For a second, the crowd held its breath as Genrev “The Revolution” Bacasno threw the vodka in the air. It seemed an impossible attempt to catch the liquid that flew a foot or two above his head.

He proved us wrong. He caught it seamlessly, drawing wild cheers in the packed bar.

This, among other “flairtending” skills, secured Bacasno’s place to represent the Asia-Pacific region in TGIFriday’s World Bartending Championship in March 2014 in Dallas, Texas, US.

After finishing second runner-up in last year’s Asia-Pacific tilt in Melbourne, Australia, Bacasno took it as a challenge and vowed to put on a better performance, spending some 20 hours of training for a month and a half.

“Since the competition is held in the Philippines, there’s a lot of expectation and pressure, especially in the freestyle round,” said the 25-year-old Bacasno. “I trained every day and made it part of my lifestyle. I lacked sleep, but that was because I was excited for the competition.”

The sudden downpour and heavy traffic that ensued on the night of the competition in Manila didn’t dampen Bacasno’s spirit and that of his fans. He charmed everyone with his boyish looks, engaging conversation and crowd-drawing skills.

A hotel and restaurant management graduate, Bacasno has been working as a bartender for four years. His skills are noteworthy; after all, he was mentored by world-class bartender Ram Ong, who also represented the Philippines in the world championships and placed first runner-up.

The competition isn’t just about “flairs,” or the skills used in bartending contests, said The Bistro Group AVP for marketing Lisa Ronquillo.

“Flairs form only 50 percent of the total score. They have to pass the oral and written exams,” said Ronquillo. “They have to be knowledgeable. In the past, bartenders had to memorize 400 different kinds of drinks.”

On the first part of the competition, known as the compulsory round, bartenders have to pass the pour test, in which they pour liquor without the use of any measuring equipment. In the drink-knowledge test, they have to memorize 100 drink recipes; and in the speed round, they have to concoct five different drinks in the fastest possible time.

Bacasno topped the compulsory round with a score of 497. In the speed round, he edged out Japan by 30 seconds, concocting the five drinks in three minutes and 16 seconds.

Like a boxer, Bacasno used to record and study his speed round and show.

“It’s good to evaluate, but then I realized that it’s not good for my performances to become scripted,” he said, adding that he wants his act to be “impromptu.”

Ronquillo noted that Bacasno exuded confidence in his performance this year.

“Last year you could see his nervousness during his performance. Though he wowed the crowd, he was inaudible,” said Ronquillo. “Now we saw he was really calm and his words were clear. He didn’t have drops, and he topped the compulsory round.”

Besting Australia, China, India, Japan and South Korea, he took home $1,000 as cash prize, which he said he would partly share with his parents. His victory also landed him a place in the growing number of Filipino bartenders who had made it to the world championships.

“In the past, the usual winners would come from Japan, Taiwan or South Korea,” said Ronquillo. “The Philippines is learning really fast. We are catching up. In fact, three had made it to the world competition. We even have a champion, Eric Martinez.”

In October, Bacasno will fly to Orlando, Florida, to attend a boot camp for bartenders. While trying to win the world bartending championship, Bacasno said he would evaluate his performance in the Asia-Pacific leg and improve on it. Despite topping the compulsory round, he said he could do better.

Bacasno added that the flairs he showcased on competition night, like the around-the-world, stall and shadow pass, were “something you can learn through hard work, dedication and passion.”

If, in the process, one fails to execute the flairs properly, Bacasno said that “it is not a reason to stop, but an opportunity to improve.”