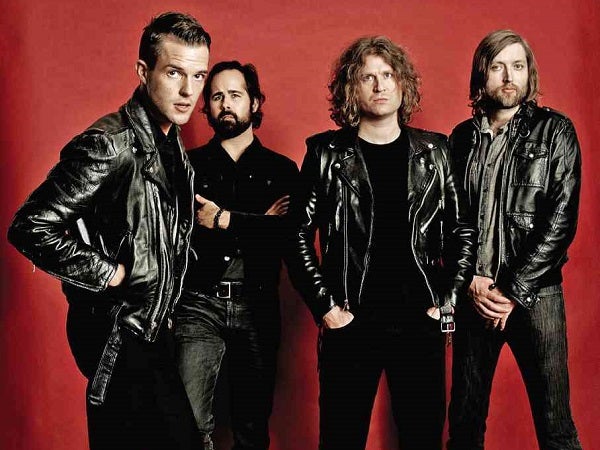 Finally, The Killers live in Manila

I have to hand it to local concert promoters nowadays. They have truly learned what makes hip, young and musically tasteful Manila tick, tock and rock.

And now, finally, American rock band The Killers are all set to play in Manila this coming Thursday, September 26, 8:00 p.m., at the Smart Araneta Coliseum as part of their Battle Born World Tour.

The band’s followers will recall that the Vegas-based quartet lost their opportunity to play for a Pinoy audience when show dates for the Asian leg of their Day & Age concert tour were canceled in 2010. If your heart broke when they didn’t make it to Manila three years ago, then now is the time to make a hot fuss and to look at the bright side of things.

Why all the fuss? This is a band that has repeatedly been worshipped on the pages of Rolling Stone and Spin. Composed of Brandon Flowers (lead vocals, keyboards) and Dave Keuning (guitar, backing vocals), Mark Stoermer (bass, backing vocals) and Ronnie Vannucci Jr. (drums, percussion), this is the incessantly nominated, multiawarded band that brought you the new wave and post-punk influenced album Hot Fuss in 2004, delivering the hits “Smile Like You Mean It,” “Somebody Told Me,” and the unforgettable and chart-topping “Mr. Brightside.”

Their relatively underrated sophomore release, Sam’s Town, came out in 2006, veering away from the anglo feel of Hot Fuss with evident American modern rock sensibilities, as thoroughly exhibited in the singles “When You Were Young,”  “For Reasons Unknown,” “Read My Mind” and “Bones,” whose music video marked the music video directorial debut of lauded film director Tim Burton.

The Killers released a compilation of b-sides and rarities, Sawdust, the following year. It included “Tranquilize,” collaboration with The Velvet Underground’s Lou Reed as well as several recordings from the band’s sessions over the years.

The Killers ascertained their versatility once again with the release of their third studio album, Day & Age, in 2008. Whilst Hot Fuss obviously reverberates new wave and Sam’s Town has a noticeably masculine sound, Day & Age slips toward the much lighter and more playful side of the spectrum. There are touches of dance-rock, gushes of pop, and—dare I say—sprinkles of David Bowie resonating through its tracks. You only need to listen to “Human,” “This is Your Life” and “Spaceman” to accept my claim.

As it was with the release of their two previous albums, the band embarked on a series of shows around the globe to promote Day & Age. The Day & Age World Tour ran from 2008 to 2010. It was wildly successful with sold-out shows across different continents, but had to be abruptly discontinued just when it was progressing toward the Asian leg of the tour.

Hence, The Killers never made it to Manila for their supposed maiden Philippine performance three years ago. Our hearts sank but we soon understood; frontman Brandon Flowers’ mother died of brain cancer the month after. At around the same time the Day and Age shows were canceled, The Killers announced that they would be taking a break from being the chart-topping, globe-trotting band we all loved. Flowers and bassist Mark Stoermer released solo albums within this period.

After more than a year, the much awaited comeback happened—The Killers headlined Lollapalooza in April 2011. They soon began working on new material and in June 2012, a trailer for Battle Born, their fourth studio album, was released and its lead single, “Runaways” first hit the airwaves. “Miss Atomic Bomb” and “Here with Me” followed, as well as the album’s full release.

Not surprisingly, The Killers have been on tour since June last year, hopping from one continent to another, in support of their latest album. And this time around, we are soooo going to be part of it.

The Killers Live In Manila! is produced by Ovation Productions and presented by Fibr in cooperation with Lenovo, 2nd Avenue, Diva Universal, Jack TV, Jack City and Sixt Rent A Car. Tickets are available online at www.ticketnet.com.ph)