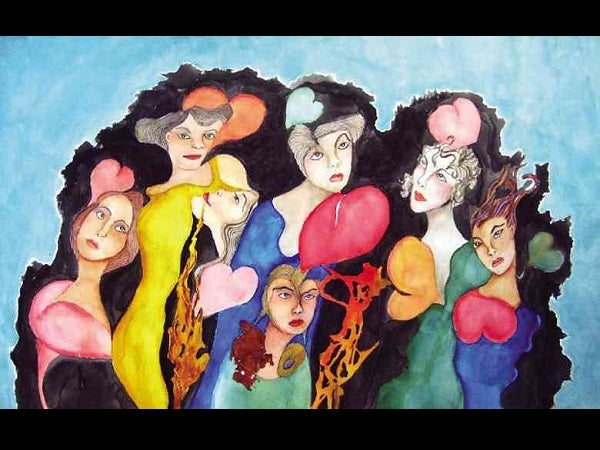 “LOOKING for the OldNeighbors” ART BY GCF, 2010

Lost in the neighborhood

When World War II was over, my father decided we weren’t going back to Quiapo. We had property in Malate, where used to stand a screen-covered chalet being rented from us by an old American lady named Mrs. Grove. (She kept a canary like ours on her porch.) But now it was a war casualty, a rubble.

In Malabon, where we had evacuated, we learned that the last stand of the Japanese was Malate. That was where they had retreated when the Americans began to liberate the northern districts (especially their civilian comrades interned at Santo Tomas University).

The Japanese had blown up Quezon Bridge, Sta. Cruz Bridge and Jones Bridge in their wake. There was ceaseless shelling on both sides.

Trapped in Malate, the Japanese units were committing unspeakable atrocities, including herding people into buildings and massacring them. The civilians who survived were caught in the crossfire.

Before entering the area, the American GIs wanted to clear it of the enemy first. They shot incendiary bombs at Malate’s corner houses, setting whole blocks afire. The flames crawled on electric wires and crossed the streets to burn more residences.

When we first surveyed the area, everything was scorched and in ruins. Gone were the chalets with screened porches that were the trademark of Malate. You could see almost clear down to the boulevard. We had come from Malabon by horse rig because my father wanted to see the parameters of our property.

Everybody was glad that the Americans had returned as MacArthur had promised, but did they have to destroy everything? We had to stay two more years in Malabon while our US reparations claim was in process, and later when our Malate house was being constructed.

In earlier times, Malate had been the summer resort of wealthy and cultured Binondo folk who built villas beside the sea, which you could still swim in then. A Mr. E. Jones, in 1901 (shortly after the Philippine-American War) saw the possibilities in buying up idle land, even if it was practically swamp, and filling and subdividing it into small lots costing P1 or P2 per square meter.

Prewar Malate had been the favored residential area for families of the American soldiery (Phil-Am War variety), quartered at Calle Militar, as well as those of civilian Americans in government and business. (Our “Mrs. Grove” must have been wife or mother of one of those.) Apparently, the new colonizers fancied tropical living in verandah-ed bungalows that took in the sea breezes and a view of the sunset.

Early residents of Malate were the Sunicos, the Bayots, the Roxas-Gargollos, the Madrigals, the Paezes, the Velardes, the Lammoglias, the Millars, the Marabuts, the Marasigans, and others too many to recall.  Many gardens had huge, stately traveler’s palms and shrubs that were neatly trimmed into round topiaries.

The installment payment for the lots had also become attractive to professionals, like my dad, doctors whose workplace was the UP College of Medicine on Herran (now Pedro Gil) and the Philippine General Hospital.

Originally slow-selling to Filipinos, the lots eventually improved in value. By the end of World War II, the lots had risen 2,000 percent their original value.

The Malate property on Luis Guerrero St., which we inherited, was sold by my sister and me in 1997. I hadn’t visited the neighborhood since.

I invited Freddie Arrastia and his wife Daisy to explore the old neighborhood with me. My sister and I were 17 and 19 years old when we had last lived in Malate.

We decided to go to Robinsons Magnolia Mall first for lunch to equip ourselves for the expedition.  Freddie, 85, was in a wheelchair, pushed by hale and hearty 83-year-old Daisy, and me, 83, on my wheelchair with my own pusher.

Seeing old neighborhoods is nostalgic and often sad. We could hardly locate our own streets. All the names had been changed—to what, we had long forgotten.

We finally located my address by using landmarks (though these, too, had been remodeled) like Philippine Women’s University, St. Paul’s College and UP College of Medicine. Georgia, or Luis Guerrero, and No. 1736 was still a vacant lot. In 16 years, its new owner had not built on it! I could see a makeshift red tent inside and a gate I couldn’t even recognize, with our number crudely painted on it.

Freddie couldn’t locate his street, either. After a lot of wrong turns we realized it was the Julio Nakpil we had been going and going around on. Daisy, on a hunch, pointed to an old house on what looked like Vermont St. and we all agreed it was Freddie’s—two storeys, same color, but the faded windows and grills were familiar!

We tried to look for the house of our good friend, Toto, on Nebraska St. but we couldn’t locate that street either since we couldn’t remember its current name. We wanted to phone any of the Ocampo brothers—but realized that Toto, Miguel, Bien and Rody were all dead.

I don’t know how long we circled the same block until we were dizzy and so dead tired we decided to go home.