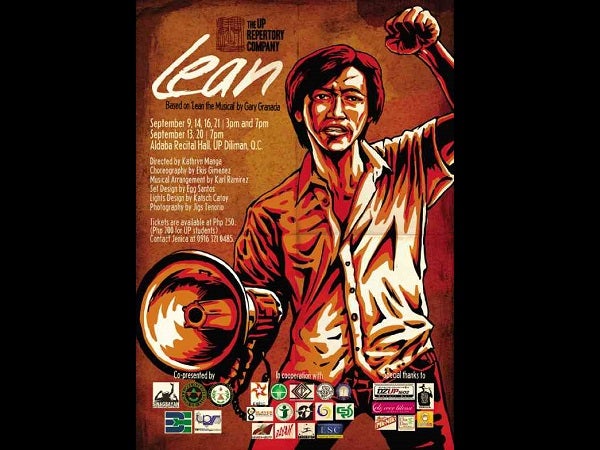 After 16 years, “Lean,” the musical about slain activist Lean Alejandro is recently brought back on stage by UP Repertory.  At a time when the youth is obsessed with iPhones, “Glee” and Miley Cyrus’ (formerly of “Hannah Montana”) controversial music video, this musical play has become a wake-up call. Video clips uploaded with permission from UP Repertory

MANILA, Philippines—Sixteen years since it was first staged, “Lean,” a musical about the life and death of iconic student activist Lean Alejandro, remains relevant and thought-provoking.

“Lean” traces the young activist’s life, from his stint as University of the Philippines council chairman at the height of the Marcos dictatorship to his stymied attempt to bring progressive politics to Congress, just months before he was assassinated at the age of 27.

Amid heavy rains, people filled the University of the Philippines’ Aldaba Hall last Saturday to watch UP Repertory breathe life into the musical penned by Gary Granada and first performed by the likes of Chikoy Pura, Cookie Chua, Bayang Barrios and Noel Cabangon.

For the next two hours, “Lean” entertained the audience – many too young to have first-hand experience of Martial Law – into understanding the lessons of Lean’s short-lived life.

The original “Lean the Musical” was staged in September 1997 after prominent artists from the local folk and alternative rock music scene banded together in a fitting tribute for the young martyr’s tenth death anniversary.

September was a significant month in Lean’s life. On September 21, 1972, then President Ferdinand Marcos declared Martial Law, changing the course of Philippine history and the lives of many Filipinos. It was during these dark and trying times that Lean was molded into an influential student leader and later rose to national prominence for his courageous struggle against the dictatorship.

However, on September 19, 1987, more than a year after the restoration of democracy, Lean was shot dead in his car by still unknown assassins.

It is in this context that the UP Repertory, through the direction of their alumna Kathryn Manga, staged the new “Lean” from September 9 to 21 in commemoration of “the life of Lean Alejandro and the struggle of the Filipino people against martial rule.”

Musical director Karl Ramirez said the play, which combined socially-relevant lyrics and popular music genres, “is an attempt to bring the life of Lean Alejandro closer to the youth through music…while inspiring them to act for change.”

Among those who watched last Saturday’s run was first year UP law student Lee Edson Garcia who said not only did the songs help students like him connect with the story, it also created context.

Coinciding with snowballing protests against the pork barrel system, the play put the audience in a pensive mood, reflecting on the country’s state of affairs and the need to act for change.

“There are a lot of issues coming out about corruption…and closer to students are the issues of basic services [including] budget allocation to education. I think [the play encourages] the students to be more involved in these issues. I think this is the reverberating theme of the play ‘Lean,’” Garcia said.

Rupert Mangilit, secretary general of the National Union of Journalists of the Philippines, said the restaging “came at a right time.”

“Everyone’s angry about the pork barrel scam, the apparent misuse of public funds. The anger of the people needs direction. During Lean’s time, he was one of those who helped direct the people’s anger…towards something substantial for the society,” he said.

Mangilit said the play should be seen by many, especially now that public outrage is peaking.

Meanwhile, television actress and UP Repertory alumna Ces Quesada lauded the cast for “a very spirited performance” at a time when there’s a lot that needs to be done in the country.

“Sometimes we are bothered because the youth of today seem apathetic…It’s a good feeling that we have students like them (in the UP Repertory) who would mount something like this to get the message across,” she said.

Though mostly faithful to the original play, Ramirez said the new “Lean” had several small but substantial deviations such as changes in the musical arrangement and the use of videos as the play’s backdrop.

He said the music was re-arranged to accommodate not only rock and blues but also techno and other popular music genres.

“The production (team) thought the adaptation should also be based on the ability of UP Rep. UP Repertory is popular for their fun and comic acts,” Ramirez said, explaining why the play had more light moments compared to the original.

It was therefore not surprising when members of the UP Repertory, known for their “tula-dula” and comical but socially-relevant skits, kept delivering humorous lines and witty side-comments with perfect timing.

Among the most applauded was Ekis Gimenez who played “Jojo,” the typical villain’s sidekick.

At the start of the play, Jojo broke the ice with the expectant audience, when he told Mr. Tim (the antagonist played by Jose Adrian Dalangin) that he has indeed seen the activists and they were even dancing.

“Ganito nga choreography nila oh (This is how there choreography looked like)…” he said, with matching demonstration.

Throughout the play, Gimenez’s character interacted with the audience, drawing attention to and breaking the boundaries of the “fourth wall.” This was also done by the other actors a couple of times, implying that their fictional characters knew that they were in a play and that there was an audience watching.

Limited by budget constraints, the use of the relatively small Aldaba Hall also contributed to the charming intimacy of the play.

Activists, Metrocom (police) officers and Aquino supporters would pass by the aisles, discussing or shaking hands with the audience as part of the story.

At one point, an officer wittingly exclaimed, “Ang sikip lang dito sa daan (The road is too narrow)!” blaming the jam-packed auditorium for his late arrival and failure to catch Lean (played by Odraube “Third” Alub, alternating with Vencer Crisostomo) and other protesters.

In another scene, Mr. Tim would tell Jojo to arrest anyone just to show their superiors that they were doing their job. Jojo would then walk over to the front and arrest someone from the audience, picking them out based on the color of their clothes.

“During the 3 pm show, he arrested the ‘man in the red shirt, the singer from The Jerks’,” Ramirez said, referring to Chikoy Pura who was the original Lean in the 1997 play.

But amid the humor and the “kilig-worthy” love story of Lean and Lidy (played by Isabel Maria Luz Quesada and Chyrene Moncada on alternate days), UP Repertory’s “Lean” stayed true to its objective of imparting, to younger generations, both the horrors and heroic acts of the era.

As the play’s synopsis said, Lean’s life “defined an era of student activism.” But it also inspires the youth of today, especially since many societal problems during that time have still not been resolved.

The second act of the play showed Lean grappling with personal and political contradictions, as well as his attempt to enter mainstream politics by running against the moneyed Tessa Oreta-Aquino.

The scene, while set more than two decades ago, seemed fairly familiar to the young audience as Lean’s opponents, in an upbeat tune, sang of vote-buying and registering corpses as voters.

“Dito, dito lang sa Pilipinas (Only, only in the Philippines)!” the chorus sang as Lean argued for the need to change the culture of elections.

“Lean” is indeed a remarkable piece of literature – tied to history but at the same time very much alive and evolving.

The new “Lean” is engaging as it combines the old and the new, marrying the profound details of the past to contemporary art and sentiments.

The scene which shows Lean driving as he sings the half-somber half-hopeful “Parating na Ako (I am Coming)” creates an intense, brooding mood just before the climactic ending.

Ramirez said the video backdrop showed the actual streets Lean passed by after his announcement at the National Press Club of a “welgang bayan (general strike)” and before he was killed in the afternoon of September 19, 1987.

“The scene of Lean’s death, the footage showing the camera fall (implying Lean falling after he was shot) is actually from the Mendiola massacre,” Ramirez said.

He said their research team was able to gather actual footages of protests during Lean’s time and used them as moving backdrops for the play. He said that particular “camera shake” was from the actual Mendiola massacre, when a camera was toppled over as the first shots rang out.

The beauty of the new “Lean” does not only come from its gripping libretto (based on the young activist’s quotable quotes) or last-song-syndrome-worthy music, it comes from the truthful and creative re-telling of history and the play’s overall ability to weave the past and the present together to bring forth a story that engages and provokes the audience.

“Lean” shows that art, like freedom, is a process and a struggle.