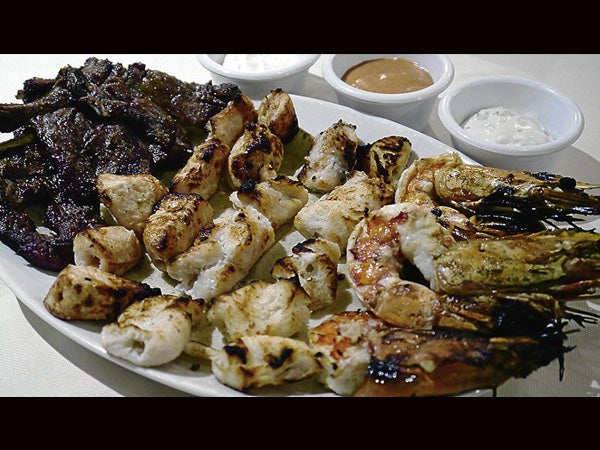 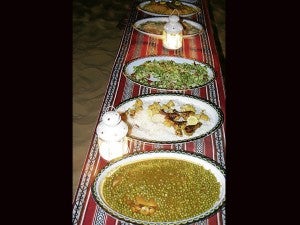 Everywhere we turned in Dubai, Filipinos came into view. Most of them didn’t know I was Filipino so when I spoke, they looked at me stunned. After realizing their mistake, one of them said, “Kalahi ka pala!”

While the city has the world’s tallest tower (Burj Khalifa), first-rate hotels like the seven-star Burj Al Arab, the man-made islands called The Palms and so many malls that there is hardly time to shop at all of them during a short visit, the desert that can still be seen all around was a reminder of just what Dubai was before its emirs decided to transform a part of the country into a gleaming city.

Just before sundown, when the desert sands are cooler, several vehicles make their way to the starting point of a hair-raising ride through the dunes. This is the desert adventure, a scream fest the faint of heart shouldn’t be allowed to experience. But at the end of it, there is dining under the desert skies.

It is a taste of the Bedouin life, or so we imagined. Over low tables, we feasted on a salad, yellow split peas, spaghetti with ground meat, and grilled minced meat on kofta or rice.

A Filipino took our photo memento, an all-around guy who also handled the falcon for those who wanted to experience carrying one on the forearm.

And to complete that evening, two Middle Eastern dances had the audience enthralled. A man in colorful costume began his whirling dervish routine, round and round for several minutes, the costume rising and falling and lighting up toward the end. We expected a belly dancer, and she arrived tall and slim in her orange costume—a Russian, we were told, because I can’t imagine an Arab woman shedding her long black abaya (some with brands like Chanel) before an audience.

Maria Alba, a Filipina staff member of media relations at the United Arab Emirates, one of our hosts on this trip (the other being the Dubai Department of Tourism and Commerce Marketing), invited us to a Lebanese dinner at Abd el Waha. Lebanon has one of the most varied cuisines in the region because it has four seasons, and also because, back when most Middle Eastern countries were very conservative, it was already cosmopolitan.

We had familiar cold mezze dishes such as the dips of hommos (chickpea) and moutabal (eggplant) and the salad of tabouleh made of parsley and cracked wheat (bulgur) and stuffed vine leaves (warak eubab bu zeut).

Quite new to me were a salad that had toasted pita bread on top (fatoush); balls of goat cheese covered with cumin, cayenne, mint leaves and olive oil (shanklish); and raw ground meat 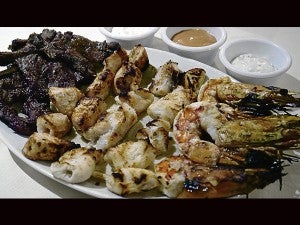 dishes made of lamb (kebeh nayyeh), again mixed in with cracked wheat, and one made of beef and garlic paste (tebleh).

All the hot mezze came at once. The favorite at the table was fried chicken liver (sawda dajaj), confirming that Middle Easterners know how to cook liver. Two kinds of sausages included the semi-dry sojok and a combination of ground beef and lamb called makanek. Potatoes were cooked as French fries and cubed, then fried and sweetened (batata zezbra). There was feta cheese encased in filo pastry (rekakat) and the Lebanese meat empanada called sambousik.

We had respites in between by running out to see the water ballet, a spectacular fountain show, so that when the main course came we could eat some more. It had grilled choices of shrimps, lamb, fish and chicken. Rice was provided and bread was always there.

I love Middle Eastern desserts, and the milk pudding with nuts and aromatic with rose water (mouhallabiyeh) plus the pancakes with walnuts and cinnamon, dipped in special syrup (atayef ashta), could have been all I ate, and I would have been happy.

I wish I had bought earlier Claudia Roden’s “A New Book of Middle Eastern Cuisine” (Penguin Books, 1985) so that I had a hint as to the spices needed for all those dishes. It would have been handy as I negotiated through the Spice Souk, a must-visit for people who love to cook and eat. I could have bought sumac used in the fatoush and pomegranate molasses for the chicken liver.

We inhaled the aromatic spices, were drawn to the dried rose buds and the asafetida (gum resin) because those were introduced to us in books. On hindsight, we were unaware that some containers had spice mixes such as zahtar (wild thyme, sumac, toasted sesame seeds), used to top breads for the local pizza.

Of course, Dubai pasalubong had to be something from the place. We surprised, again, two Filipinos when we asked where the baklava was being sold at the supermarket. And Filipinos who know the place recommended Choc & Nut for chocolate-covered dates, dates stuffed with walnuts and almonds and the exceptional pistachios, lemon-scented or plain.

All those disappeared so fast, and the main culprit was this Filipino.