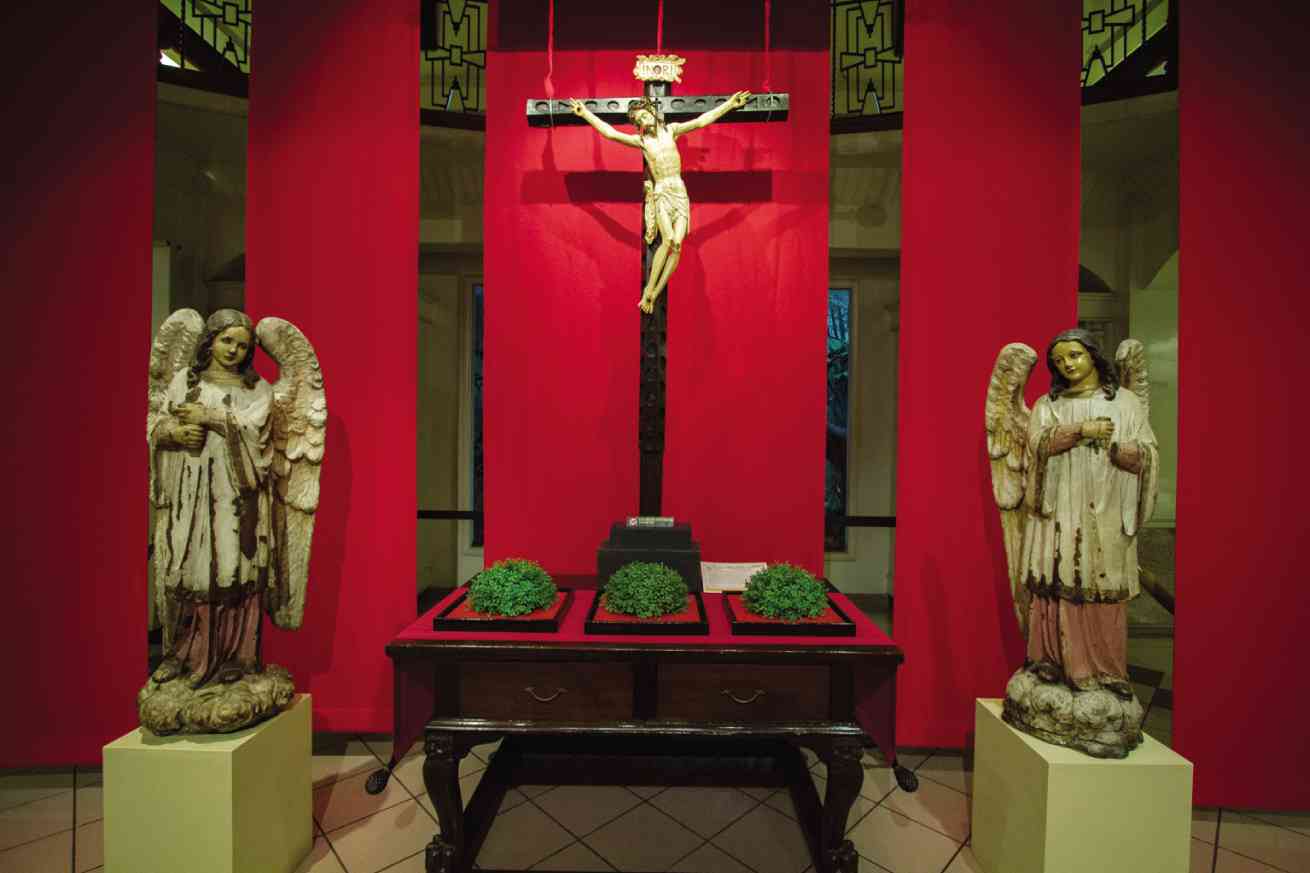 An exhibit at the University of Santo Tomas Museum of Arts and Sciences displays the longest known ivory corpus in the Philippines, the “Crucifixion of Christ,” the same figure  included in the October 2012 issue of the National Geographic that exposed the alleged thriving illegal trade in ivory icons in the Philippines.

The icon has been described in various exhibit catalogues as the “finest and largest” of its kind.

But the exhibit, “Ars Eboris Sacri (Art of Sacred Ivory): Ivory and Controversy,” seeks to correct the wrong impression made by the National Geographic that the UST’s Crucified Christ was made after the ban on worldwide ivory trade by an international convention in 1989.

The icon was made in the 19th century, along with nine other exquisite ivory items in the exhibit, some of them even having been made in the 17th century, said UST Museum director Fr. Isidro Abaño, OP.

UST has complained to the international publication about the inclusion of the photograph of the Crucified Christ in its report without providing the information that the icon was actually made in the 19th century.

It’s no secret that UST keeps the largest known ivory corpus in its vast collection of sacred art, university officials said. UST has the oldest museum in the Philippines and the university itself is the oldest in Asia.

In fact, the icon has been loaned for various exhibits to museums here and abroad as an example of Spanish colonial art and Catholic cultural patrimony.

When it is not on loan, it hangs in the museum’s Hall of Religious Images which is open to the public, officials added.

The controversial article focused on the collection of ivory icons and figures of Msgr. Cristobal Garcia of the Archdiocese of Cebu, who reportedly disclosed to Christy that his collection had been built through the international ivory-smuggling trade, the local hub of which is allegedly Tayuman Street, Sampaloc, Manila, near UST, with its rows of stores selling religious articles.

UST officials said the exhibit aimed to correct the impression created by the National Geographic that the UST ivory collection was part of the illegal trade in ivory.

“This exhibit aims to raise public awareness about the origin, function, historical value and significance of these objects as well as hope to help prevent elephant poaching for the acquisition of new ivory,” said Father Abaño.

“The UST Museum,” the Dominican cultural-heritage scholar added, “in no way condones the collection and commissioning of new art in ivory. However, it also recognizes its responsibility to play a leading role in safeguarding, documenting and conserving these antique ivory pieces that have become an irreplaceable cultural heritage of the university and of the Church.”

Abaño added that the ivory collection in the university was acquired centuries ago, citing that there once existed vibrant inter-ocean trades between the Philippines and other countries.

“We are not patronizing the production of new ivory pieces, but since our collection is considered part of cultural heritage, there is also our responsibility to take care of it,” he said. “We are protecting the good that came out of past practices.”

Abaño said UST was doing its share in cultural conservation. Its graduate program in Cultural Heritage Studies is well-known. Its Center for Conservation of Cultural Properties in the Tropics, headed by Eric Zerrudo, a former director of the Government Service Insurance System Museum and the Metropolitan Museum, has restored a number of important paintings and advised local governments on cultural mapping and conservation.

The Master of Arts in Cultural Heritage Studies program of the UST Graduate School has been named an institutional member of the Asian Academy for Heritage Management under the Unesco and the International Center for the Study of the Preservation and Restoration of Cultural Property, the only Philippine school to be so accredited.

Among the ivory icons on exhibit are Mother and Child, from the 18th century; La Divina Pastora, from the late 19th century, made of ivory, glass and shell; and the tableau “Calvary,” showing the Blessed Mother and Mary Magdalene at the foot of the Cross. Another  figure is of St. Francis Xavier, the Jesuit missionary of India and Japan, made of ivory and wood.

A familiar ivory icon is Our Lady of the Rosary-La Naval de Manila, made in the early 1600s and considered the oldest ivory figure made in the Philippines. It is enshrined at Santo Domingo in Quezon City, the mother church of the Filipino Dominicans.

Also included in the  exhibit are ivory figures of Beata Juana Aza (the beatified mother of St. Dominic); and San Pio Quinto (St. Pius V), the reformist Dominican pope of the late 16th century who led the counterreformation and rallied Europe against the Ottoman Turks in the Battle of Lepanto.

The largest icon on exhibit is of St. Thomas Aquinas, made of ivory and wood, from the turn of the 20th century. The exhibit was inaugurated to mark the 690th anniversary of the canonization of the Dominican scholar Aquinas, the patron saint of UST and all Catholic schools.

“When it comes to humanity’s relation with the nonhuman world, care, and not domination, should be the operative moral principle,” said Father Ang. “A Thomistic approach to the futurity problem does not exclude and devalue other species.”