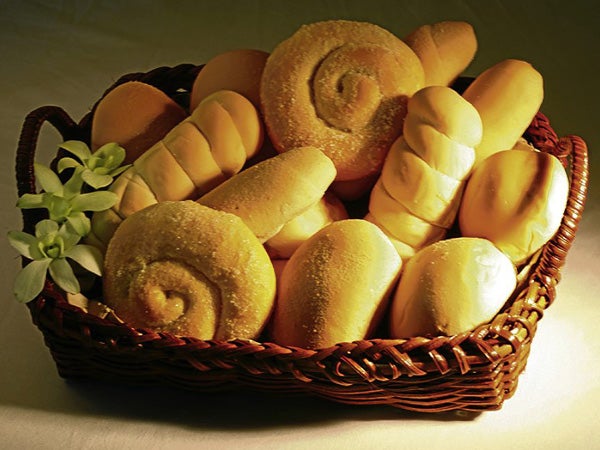 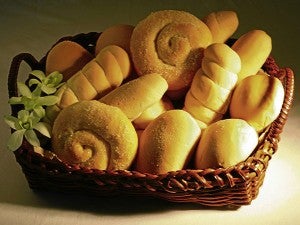 The sign caught my attention at Manna from Heaven Bakeshop—“Ashitaba Pan de Sal for Sale.”

Ashitaba means “tomorrow’s leaf,” a Japanese vine that is said to have a myriad of health benefits.

I was first introduced to the ashitaba by Rudy Bautista; he had been gifted with a plant and was advised to take a leaf a day. He had me taste it and it is palatable, has a nice crunch and distinct flavor to it.

Fr. Dave Buenaventura, who’s in charge of Manna from Heaven, let me know more about the bakeshop and its quite avant-garde creations.

The shop is said to produce over 30 kinds of bread.

Ashitaba is the shop’s latest offering. “We have a lay minister who is a very sickly man and he is taking ashitaba,” Fr. Buenaventura said. “He told me, ‘You have to take this ashitaba, it is very good for your health.’”

“First, I tasted it, then planted them,” the priest added. “They grow very easily. I thought, we are making malunggay, why not ashitaba pan de sal, since I can eat the leaves and put it like lettuce on my tuna sandwich?”

Fr. Dave does not bake or cook at all. His skill is “personnel management,” which is perhaps why Coffee & Saints Coffee Shop, Manna from Heaven Bakeshop and Bosco Spring water-refill station are thriving.

All three outlets, found within the confines of Don Bsco Makati, are part of the livelihood skills program for the youth at risk and poor and needy migrants of Pugad Center.

Coffee & Saints serves budget meals. It makes puto bumbong and bibingka (both recipes and skills passed on to the boys by Via Mare). It has its own suman at mangga, drizzled with Pugad honey.

“I have spoken to the boys and told them that they should assert themselves in developing something that is really ours,” Fr. Dave said.

“For example now, at Saints we have something uniquely ours, called bangsikong (bangus and kangkong)—milkfish fried with steamed buttered kangkong smothered with pugad bagoong and tomatoes.”

He added the shop also makes bangchebos (bangus, cheese and talbos), fried bangus served with steamed talbos ng kamote, grated with cheese and sliced tomatoes on the side.”

It is inspiring to see so many people mold Pugad in to what it is today. The credit goes to the boys themselves.

The priest said making bagoong was a skill taught by Erwin Mortel, a migrant from Romblon who finished culinary arts and now works at the Intercon. 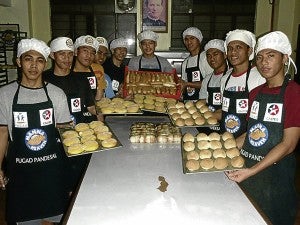 He said the skill was passed on to on to street migrant J-O Marzonia, who’s leaving the shelter soon since he has finished his auto-mechanic course at Don Bosco and is doing his on-the-job training with Isuzu Gencars.

Niño Katalasan, another migrant, taught the boys how to make peanut butter.

“We improved on it, made it less oily,” Fr. Dave said. “Now we sell sugarless and sugar-free peanut butter.

Pugad Honey is made by settlers in Don Bosco’s new farm in Batangas.

Fr. Dave’s dream is see the boys manage the whole program. He said a migrant boy is already running the water station, assisted by Romy Lobedesis, who will soon manage the Batangas farm.

The boys have recently been taught how to package, the priest added, so Pugad is coming up with its Christmas food baskets.

Pugad Center will also have a tailoring and printing shop for printing T-shirts.

“So we need help, we are looking for trainers who can teach the boys to sew,” he said. He explained he wants to recycle flour sacks into shopping bags.

“Icons are windows to the divine.”

On September 15, Father Dennis Paez and the icon makers of Ginto will teach the art of iconography. Make and bring home your own icon and learn about its history.

Aside from iconography, you will feast on and learn how to prepare monastic food.

The recipes I will be teaching were taught to me by nuns and priests, sourced through the help of Maryknoll Sis. Helen Graham, Luz Maria Buitrago Capuchin Tertiary Sister of the Holy Family, Sis. Mary Raphael of the Redemptorist Monastery in Albay and Fr. Herb Schneider, SJ.

Proceeds will go to the “icon makers.” Slots are limited.