Randy Ortiz show could be the biggest for 2013 | Inquirer Lifestyle ❮ ❯ 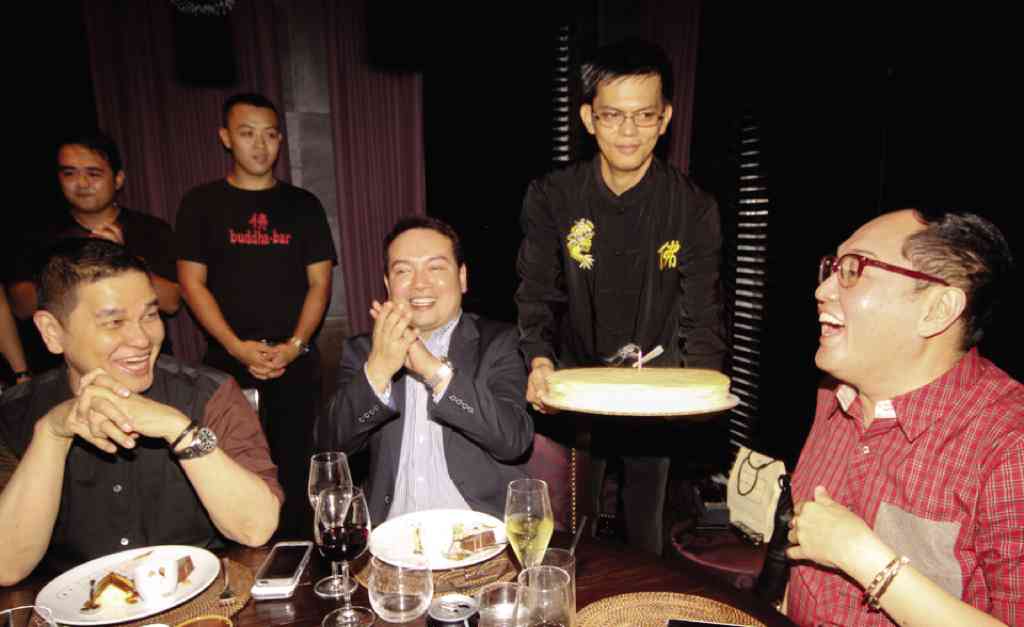 AT BUDDHA BAR, INQUIRER Lifestyle gathers Ortiz’s friends, Ben Chan and Marco Protacio (above photo), among them for a post-birthday dinner for Ortiz and to talk about friendships.

Randy Ortiz show could be the biggest for 2013

Entertainers and other celebrities most identified with Randy Ortiz will take part in the Inquirer Lifestyle-Look Magazine-Samsung  Face-Off 2013. They will pay tribute to the fashion designer of celebrities on his 25th year in the industry.

The celebrities will be led by the so-called “Magnificent 7”—Richard Gomez, Lucy Torres, Ogie Alcasid, John Estrada, Rissa Mananquil-Trillo, Dingdong Dantes, and a “surprise guest” whom Ortiz will not name.

The seven are Ortiz’s “muses,” his creative inspiration for his bestselling designs.

“Randy O Silver-Heaven on Earth” is  the second and the last show this year for Face-Off 2013. (Last June, Face-Off 2013 presented the bridal collections of top designers at Radisson Blu in Cebu.)

Celebrating Ortiz’s  25th anniversary in the rag trade, the fashion fireworks will explode at the Rigodon ballroom of The Peninsula Manila in a  gala tomorrow (Sept. 28) at 7 p.m.

Samsung will present its Galaxy Note 3. (See related story below.) Co-presentors of the show are Champion Infinity and Hana shampoo.

Aquino said he would try to fuse all the elements to complement Ortiz’s designs.

Ortiz himself has collaborated with visual artist Doltz Pilar on the production design, while the floral arrangements will be made by Roberto Blancaflor.

Music will be “premixed” and will be mainly instrumental, from guitar music to the  djembe (West African goblet drum).

Backstage, Calayag will do the hair and makeup based on the classic black-and-white photo of China Machado by Richard Avedon.

Executing the designs will be Jing Monis Salon. Famous Salon by F&H and Shu Uemura will provide the makeup palette.

Menswear designer Anthony Nocom will be dresser for the male models. The men’s shoes will be from Pedro, the foreign brand launched by the Bench group recently.

Pablo Cabahug, a winner of Look Magazine’s Look of Style Awards in 2010, will be dresser for the female models. Women’s shoes will be by Figlia.

Cabahug was Ortiz’s apprentice for almost a decade before he came into his own and won the 2010 contest. His prize was a British Council-sponsored exposure at the famous Central Saint Martins  in London.

“Randy O Silver-Heaven on Earth” will be presented in four suites—Sorbet, Autumn Sonata, Organica, and for the finale, Noir, Silver and Platin.

With 15 dressers, 25 hair and makeup artists, 60 models, and a 60- to 80-piece collection, the fashion show promises to be the biggest by a single designer this year.

‘I do love yesterday, today, tomorrow and forever…  But no to same-sex marriage’

Born under the sign of a Leo, you like to be surrounded by family and  friends. You are popular for hosting casual dinners and get-togethers. Name at least five  “dream” guests.  What will you serve them ?

Vilma Santos. I’m a true-blooded Vilmanian, and I was seeing myself as Trudis Liit when I was growing up.

I also would like  Pope Francis to be there.

Then it would be a toss-up between Leo DiCaprio and Ryan Gosling—should you still ask why?

Then Italian fashion master Valentino Garavani, the hero I have always looked up to.

Then Ninoy Aquino, my other hero; but on his behalf I will invite his daughter, Kris Aquino. It’s always been fun talking to her and her energy amazes me.

I will serve them my very famous adobo and kalkag brown rice.  I can just imagine how the conversation would go.

What is your divine decadence? After-work stress buster?

After a hard day’s work, I can’t wait to have a bowl of sotanghon soup and smoked or tinapang bangus and tinolang manok for dinner.

Lately I haven’t been going to malls anymore, so I do my shopping when I travel.

Sunday is best for hilata or rest day, or I would sometimes host a mahjong dinner for my designer friends.

For inspiration, who are your heroes?

Aside from my Papa and Mama, I love to turn to the great fashion icons of the golden years of fashion, the likes of Christian Dior, Cristobal Balenciaga, Madam Grés, Charles James, Madeleine Vionnet, Valentino, Yves Saint Laurent and Giorgio Armani.

It has always been an open secret among your friends that your life and career have been successful partly because of the men who inspired you. Would you ever plunge into same-sex marriage?  If yes, what would be your dream wedding?

All I know is that my life has become more colorful and flowery because of all these beautiful creatures.  Loving your inspiration is the ultimate goal.

As I have said, I do love yesterday, today, tomorrow and forever.

But no to same-sex marriage, as I still haven’t found the right man to marry, so my dream wedding and honeymoon destination are still in the making.

But honestly, I find married men more interesting and appealing.  And besides, they can pay for their own suits, hahaha!

What scent rocks your world?

When I was younger, I used to be deprived of all these material things because I was not earning that much, so I promised myself that I would splurge on my vanities when possible.  Perfect combination for me is mixing agua de colognia (baby cologne) with either grapefruit or basil and lime by Jo Malone; the scent is irresistibly fresh and sensual.

There are many  works of art in your atelier. When doing a fashion collection, do you approach your work like art?

I love especially contemporary art, particularly abstract paintings. But when it comes to fashion, I don’t go for avant-garde and edgy.  I still stick to my classic sensibilities as a designer.

What music do you listen to? Favorite books, magazines, films?

I do have various trade books on fashion and they have been a great source, reference and inspiration.

“The Little Prince” by Antoine de Saint-Exupery is my favorite book.

I go for feel-good movies, and I don’t like action and horror films.

Do you consider the young designers who have been schooled in the best international institutions a threat to your career?

No.  I’ve always believed that experience, especially experience acquired over 25 years, is more than enough testimony for a reliable designer to whom clients can keep returning.

What would you advise television newscasters (male and female)  to wear and what not to wear?

I don’t like newscasters wearing loud, printed, screaming colored clothes that are so distracting.  Neutral and subdued colored suits are more appropriate.  I can’t help but notice that most male newscasters are properly groomed and well-dressed.

Dressing up Hollywood is a big issue, especially with those red-carpet events. Who are on your wish list?

What is your favorite fashion era?

The  1950s, when great fashion masters such as Dior and Balenciaga reigned. They continue to influence modern designers.

Britain  is the home of modern menswear,  mod, skinheads, punk, new romantics, ravers and grunge fashion. Which among these styles do you like to wear?

I don’t like grungy and extreme Bohemian or boho looks.  I wouldn’t be caught dead wearing them because I don’t want to be a fashion victim.

I’ve always liked flattering clothes for both men and women—that is, Modern Romantic with a hint of rock and Goth.  I was never an extremist, or daring enough to wear clothes that are not the extension of my personality and sensibility.

My oxblood handbag by Mulberry and my black Givenchy tote.  A pochette is inside, and a small coin purse in emerald green, this year’s lucky color.  My baby cologne, my cellphone, and my iPad.

I like the fusion of modern and classical art.  Evolution and innovation become more effective when you’re able to merge these two extreme sensibilities.

What is the coolest place for you?

Paris is picture-perfect for me.  But recently, I enjoy going to Japan or Hong Kong because they’re more accessible and cost-efficient.  Bangkok is also an exciting city, and the food is superb.

Bespoke suits are your trademark. Describe your men’s collection in two words.

How do you cope with rumors and intrigues?

I just keep my mouth shut.  Ipinagdadasal ko na lang sila.  I’d rather divert the energy to a more positive activity, such as sketching.

What is the most dangerous thing you have ever done?

What would you consider the darkest moment of your career?

Nothing in particular.  My profession is physically, emotionally, financially and mentally draining, a challenge for me to cope with, to improve for the better, and to be in control.

No major projects at this point, it’s too early to tell, but I do believe that the best is yet to come.

What is your idea of retirement?

I would like to take it gradually and slowly.  I’d like a fancy vacation house in Tagaytay where I can gather my family and friends every now and then.