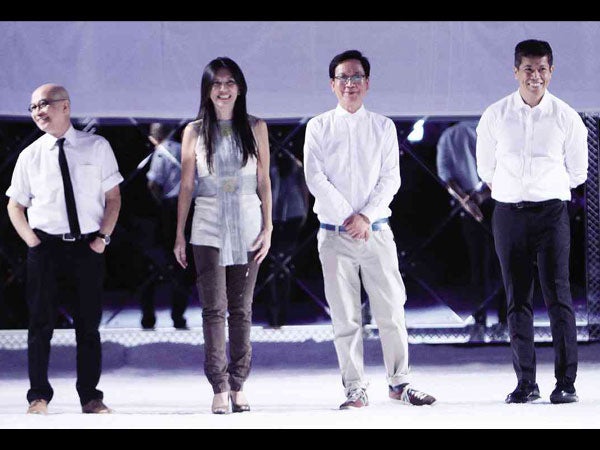 It wasn’t snow but it might as well have been a fresh pile of flurry, as guests in high heels tottered on the pristine shag carpeting at The Peninsula Manila’s Rigodon Ballroom. The carpet was laid out for the first-ever “Salon” show of Cesar Gaupo, Jojie Lloren, Dennis Lustico and Lulu Tan-Gan.

Overhangs of sheer white fabric muted the lighting, casting a nice glow on the eight live mannequins on the runway, two for each designer. The sight was a prelude to the actual show. 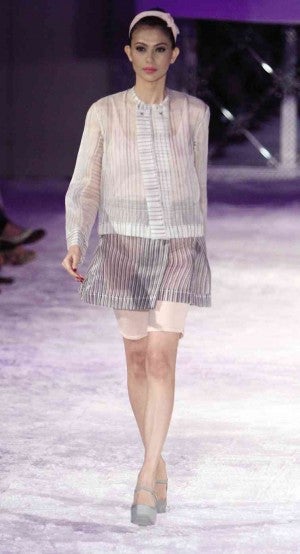 The mood was understated, with tiffany chairs lined up facing center of the runway. Director was Ariel Lozada.

Some editors were expecting an intimate clients-only show, since historically, Paris Salon shows were for couture customers, done in small, exclusive venues (even the press would be excluded, as in Tom Ford’s strictly-no-photos presentations of late). But that was not to be, as the turnout ballooned to 500 from the original 350 invited.

The designers presenting their individual Holiday 2013 collections had said they wanted a show that was “about the clothes, not the big stage,” thus the Salon concept.

They may have failed to limit the attendance to their most loyal clients, but the four designers nonetheless seem to have fulfilled their goal: to sell the clothes as soon as the models left the runway.

As Gaupo himself enthusiastically put it two days later: “It was overwhelming! I’m so happy it was successfully done.” 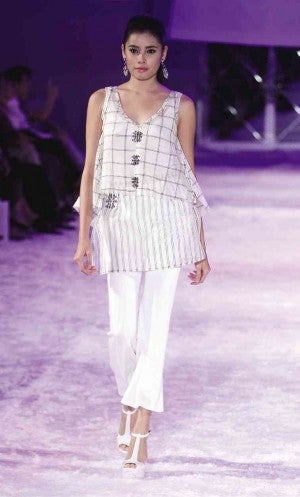 Digital catalogs, in partnership with Smart, were shown to the guests after the show. This allowed clients to place instant orders.

And the orders were “a lot!” said Gaupo, who, with Lustico, received the biggest number of intent-to-buy queries, according to some of the iPad-toting catalog girls we spoke to.

It wasn’t a contest, of course, and only the designer will know eventually how the premier “Salon” event would affect his/her business.

“We still need to fine-tune our process as we haven’t done this [e-catalog] before,” Lustico said. “There were many queries, but they can still back out, we don’t know.” 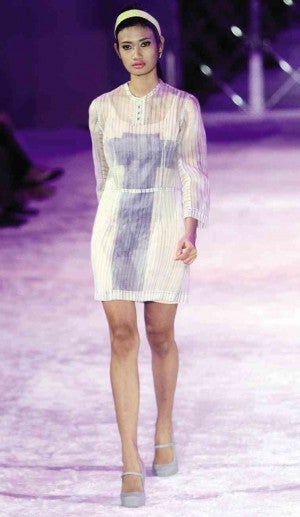 Tan-Gan, who has a retail store, opened the show with a collection of her signature  handmade “indigenous couture”: hand-loomed knits paired with handwoven piña.

There was a contemporary spirit to her collection, a bid to banish the stuffy image of traditional and indigenous fabrics. Her knitwear was a blend of cotton and lurex in tunics, shifts, shorts (cycling shorts!), tank tops and trousers. It served as backdrop for the gossamer piña and piña-silk fabrics.

The piña pieces were designed primarily as accessory garments, and Tan-Gan obviously considered ease of movement, with wide slits and openings for functionality. She obviously wants to keep her designs travel-friendly.

More than a traditional celebratory fabric, piña is being pushed by Tan-Gan as contemporary everyday wear, thus the casual elegance of her collection.

For evening, she had dress-over-trousers style.

She said the piña was boiled to give the fabric a softer feel and fall; it was dyed using natural barks and seeds. 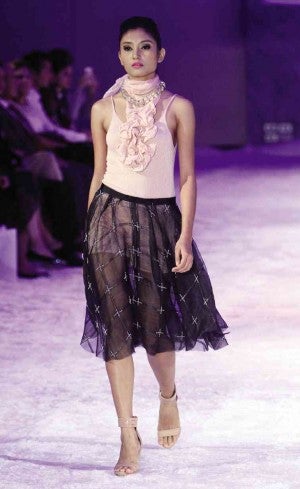 Piña-silk was also used for its translucent and futuristic sheen.

The pastel-colored knits lent a softer appeal to the iridescent piña garments.

Lloren, whose last collection  was inspired by Art Deco, looked to another decorative art movement for “Salon.”

Art Nouveau-style floral and swirl patterns were sewn into the seam lines of his black-and-white, teal-accented collection, with 3D blooms shooting out of necklines in one or two items. 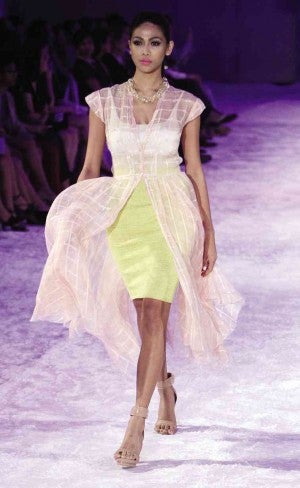 There were deep V-cut backs, even shape-skimming pieces, and some intended for Pilates-toned arms, but Lloren clearly didn’t have debutantes in mind. It was for a more refined demographic.

The shapes were largely forgiving, even modest and covered. There were dresses with long sleeves or cape, a tent top, a voluminous long dress. Perhaps to keep current, two looks were paired with leggings.

“I didn’t have anyone in mind,” Lloren said. “I wanted to do two editorial pieces, my first look and the finale, but the rest had to be commercial.” The designer’s strength has always been his tailoring, and it showed.

Lustico’s collection was inspired by the works of the Pritzker laureate Zaha Hadid and the references were evident.

The laser cutting, in leather, was a nod to the linear and graphic elements of the architect’s work on the Guangzhou Opera House, for instance. The sinuous lines of Hadid’s chandelier at 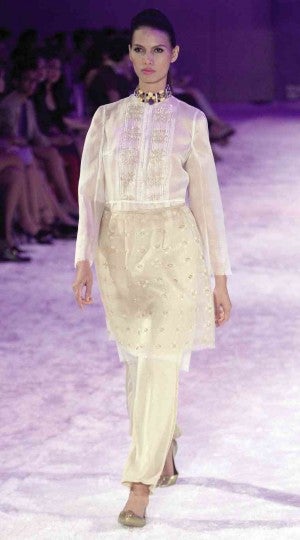 the Swarovski Crystal Palace were seen in the taffeta and tulle looks.

He stuck to neutrals—eggshell, celadon, gray—with wearability as primary consideration. In this collection, which seems to have charmed some of the younger editors, Lustico said he decided to put together something that, for a change, his clients might want or need—in short, commercial—but one that he wanted to do for himself. The move seems to have paid off with an audience that constantly wants something fresh and new.

There were hints of skin in the panels of sheer fabric and in the slats of the laser cutting, creating a sense of cheekiness even in an otherwise modest long-sleeved dress, for instance.

There were also evening coats to ward off the air-conditioning chill, say, at a CCP gala.

Gaupo had no clear reference for his collection, and that’s because he didn’t have any. 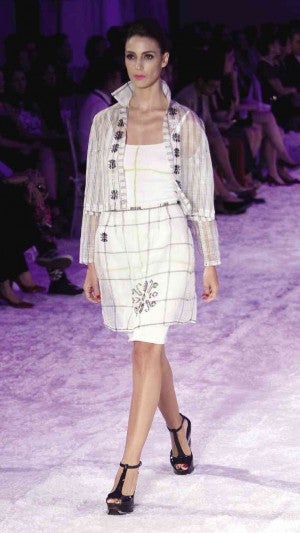 “I just did what I could with the fabric,” he said of the all-gazar collection that displayed his signature bold mix of colors.

While we noted some elements of Orientalia—a modified kimono coat, an obi-like sash, tassel accessories—the designer insisted those were not intentional.

“I believe it’s just my use of color [that was a nod to the Orient],” he said, pointing out his use of African and Renaissance-style embroidery, graphic elements that appeared on bodices.

“There’s nothing wrong if people think that I did this and that. It’s like when you look at a painting and you derive something from it other than what the artist intended. That’s just accident.”

Gaupo had crowd-pleasing evening dresses and tailored coats, as well as a long sheer skirt with shorts underneath. It’s not for his typical client, but for her daughter, he said. “I also make clothes for the daughters of the señoras. But even when I do something like that, I like to think that there’s still sophistication.”

The four, who plan to stage “Salon” again, said they have to iron out some kinks. For instance, they had seating problems because their invitees brought along friends not on the guest list. They knew better than to refuse entry to anyone; that’s just never done in Manila.

But these are all happy problems. As Gaupo said, that night, he made new clients.