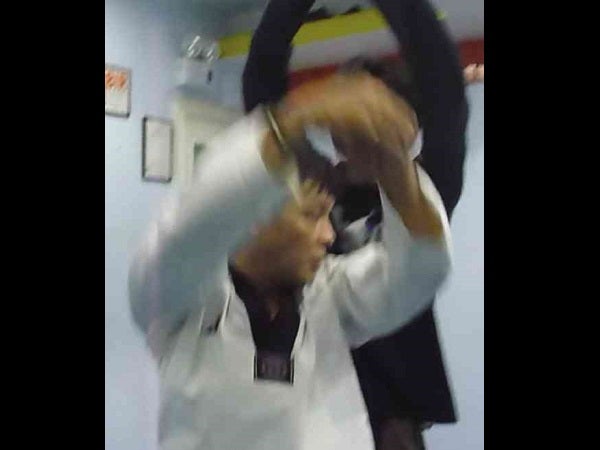 Standing at four-foot-ten with an uncanny ability to get lost, I’ve come to terms with the fact that I can very easily be the target of street crimes—petty or otherwise. It certainly doesn’t help that, while others have what has come to be known as Bitchy Resting Face, I’m stuck with what I’ll call Clueless Commuter Face. I might as well stick a bull’s eye on my forehead.

As a result, I have learned to adopt precautions like keeping a key poking out of my clenched fist or clasping an uncapped pen inside my pocket when walking at night, even at short distances; aside from texting the license plate number to a relative, dictating my preferred route to the driver on the rare occasions that I have to take a cab alone, and making a habit of locking the doors of my car when I’m inside.

A few years ago, my boyfriend Robert and I came to an agreement: He’ll take cooking lessons with me and I’ll take self-defense classes with him. A few months ago, we finally came around to enrolling ourselves in the latter: a martial art designed for street application called pasuntad.

Formed in the 1970s by Rudy Lopez, one of the pioneers in taekwondo in the Philippines, pasuntad stands for “paraan ng suntok at tadyak.” If this sounds familiar, it’s because taekwondo similarly translates to “the way of the hand and the feet,” and this is no coincidence. Pasuntad admittedly is based on taekwondo, but incorporates other martial arts like aikido and hapkido, as well.

Lopez says that taekwondo, due to its popularity in the tournament circuit, has focused on the sporting aspect of the martial art. He developed pasuntad to concentrate on the self-defense aspect.

In pasuntad, people are taught forms, kicks, chops, blocks and punches; they are also shown how these may be used outside the dojang in situations where, for example, they are held up or assaulted with bare hands or a weapon.

Our instructor, Elbert de Guzman, even goes further and customizes our moves specifically to build on our individual capacity or, more accurately, work around our weaknesses.

Since I’m a short girl with short limbs—a lot of the techniques don’t apply to me: Even if I learn to throw a mean punch or a perfect kick, it won’t do squat if I can’t even reach the offender’s weak points.

So, in our classes, I am introduced to alternative ways of getting away (hopefully) unscathed from an attack, like kneeing the crotch and using the thickest part of my skull—the top of my forehead—to smash the attacker’s nose. Then running away as fast as I can.

Yes, the lessons usually end with putting as much distance between me and the offender because our instructors build up no illusions about their students’ capabilities and are pragmatic enough about these things that after teaching me different techniques, helping me develop presence of mind and reminding me to build up my strength, I am advised not to stay and fight a big bully with evil intent and a bruised ego, even if his nose has been badly broken. After all, the main objective of self-defense is self-preservation.

It’s been three months since I did a combative kick for the first time in my life and my kicks are finally starting to get consistent and, hopefully, powerful. (My punches and endurance are a different story altogether, though.) But more than the satisfaction of executing strong hits, taking self-defense classes make me feel more secure in myself knowing that if my preventive measures do not hold up, I’ll still have a fighting chance against an attack.

Three basic moves to help you get out of sticky situations:

When someone forcefully grabs you by the wrist:

The weakest part of a grip is where the fingertips meet the thumb. Twist your wrist so that that weak point is at the side of your wrist. Then, very suddenly and as quickly as you can, push your fist down and forward, then snap it back up. Once you’re free of the grip, take the opportunity to run away. 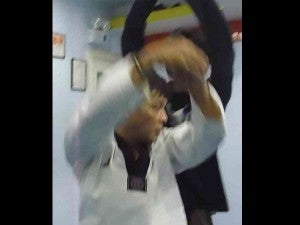 When someone bear hugs you from the back:

When you find yourself locked in a tight grip from behind, clasp your hands together closely to your chest. Then, rapidly and simultaneously squat as you push with your clasped hands your attacker’s arms up and off you. Follow it up with an elbow to the attacker’s side to temporarily disable him. The clasped hands will serve to make the hit more forceful. Start running away immediately.

When someone tries to strangle you: 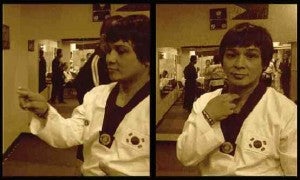 When an attacker is wringing your neck, cross the middle finger of your dominant hand over the forefinger (this will make your “weapon” more solid). Bring it up to the space at the center of your attacker’s clavicle (the soft, depressed spot at the bottom of the neck) and ram it hard with the tip of your middle finger, effectively choking your attacker and giving you time to run away.

Reminder: Practice these moves so that if the time comes that you’ll need to employ them, you will be quick. Speed is key; you must take your attacker by surprise. As soon as you are free, move away fast before your attacker catches you again. Always call out for help.