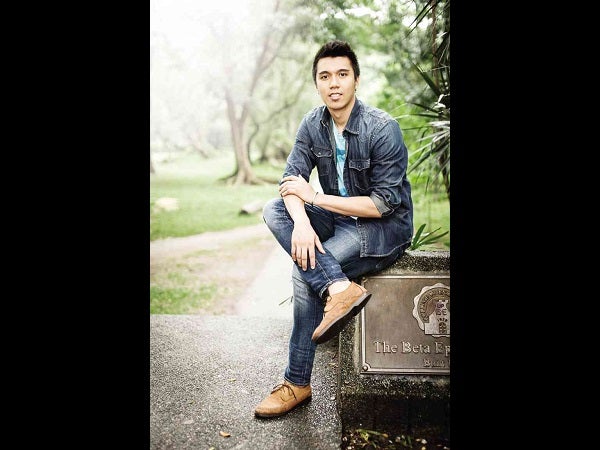 HOW he balances academics and basketball: “First, I make sure to set my goals. Second, know my priorities, and lastly, I minimize distractions.”

It’s the last few seconds of the game and everyone waits anxiously to see how things will turn out. Barely anything can be heard above the deafening yells of the students from the two schools, proudly wearing their colors, red for one school and green for the other.

One feels a sense of anticipation in the air as all eyes focus on the center of the arena. A young man, in red and white, jersey number 18, is in possession of the ball. Opponents are crowding him, trying to overpower him. With only 3.4 seconds left, he goes for it. The winning shot. His team wins!

This was the scene in the opening game of the 89th NCAA Basketball tournament last June 22 at the Mall of Asia Arena. The San Beda Red Lions were pitted against the De La Salle-College of Saint Benilde’s Blazers, with the former barely scraping a win after a tough second half.

It was obvious that the win would not have been possible without San Beda’s Art dela Cruz, who plays starting power forward. He has proven himself to be a strong asset to the Red Lions. He’s good in both offense and defense.

This is not surprising. He is the son of PBA San Miguel Beerman Arthur dela Cruz, who was with the 1995 PBA All Defensive Team.

What does it feel like to be the son of the former PBA star?

The proud son sees it as a blessing, for he is getting from his father not only tremendous support but also tips on the hard court.

Art says, “I am proud [to be his son]! My dad is one of the most awesome guys on earth!”

His father serves as his greatest inspiration; it was his father who first exposed him to basketball.

Art began playing the sport—somewhat officially—on his 4th grade at St. Mary’s Academy of Bulacan. He was the youngest member of his team—all his teammates were two years his senior. Nonetheless, this did not stop his team from making him the point guard.

In high school he played as power forward of the San Beda Red Cubs.

It was in the collegiate leagues where his true potential was realized. His talent shone when he played for the Ateneo Blue Eagles. Then he was recruited to the San Beda Red Lions.

The shift from the UAAP scene to the NCAA wasn’t a problem for Art, as proved by his strong performance with the Red Lions.

Asked how he finds playing for the San Beda Red Lions, he says, “It is a great honor but it comes with great responsibility.”

He owes these accomplishments to hard work and hopes for another chance to bag the trophy this season.

He says, “We are very proud because we worked hard for [the championship]. We improved a lot. This year, there is a big chance of us winning—all we need is passion, determination and team work.”

The Red Lion power forward made it clear that his young life isn’t all about dribbling and hard court.

He is working for an AB degree in Communications, and made it clear that he gives priority to his studies, not only to his training.

He realizes how crucial time management is if he is to balance academics with basketball.

“First, I make sure to set my goals. Second, [I make sure to] know my priorities, and lastly, I minimize distractions.”

He says that these are the three steps he usually takes to utilize his time wisely.

Although he dreams of going professional, his long-term plan is to help his mother with the family business in Bulacan by applying his knowledge on marketing management.

He admits that if he wasn’t a basketball player, he would focus on working on his mother’s business and helping it grow.

Whether he’s shooting baskets on the court or making business plans, Art dela Cruz has proven that he can do it all. His resolve to work hard and do well in everything he does is a key factor in his success. With support from his family and his team, this young talent undoubtedly has a bright future ahead.