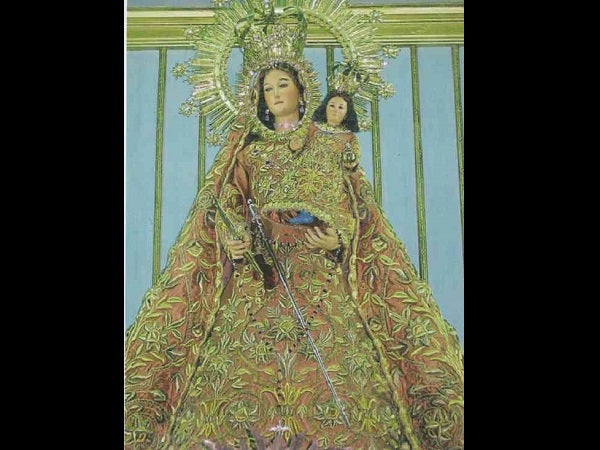 OUR LADY of the Pillar, patroness of Zamboanga

The Philippine Embassy to the Vatican has announced that the mosaic image of San Pedro Calungsod, the second Filipino saint, will be blessed by Pope Francis on Nov. 21, 4:30 p.m., at the Crypt of the Basilica of St. Peter, next to the tomb of Pope Paul VI.

Next to be installed at St. Peter’s is the image of Our Lady of Peñafrancia.

Antipolo Bishop Gabriel V. Reyes  will officiate in the dedication of  St. Francis of Assisi Parish in Cambridge Midtown Floodway  in Cainta, Rizal, on Oct. 4, Friday, 4 p.m. Fr. Jaime Padilla, parish priest, with 50 priests from the diocese will concelebrate with Reyes.

Our Lady of La Leche

Members of Our Lady of La Leche Movement will hold the fiesta of Nuestra Sra. de la Leche y Buen Parto (Our Lady of the Milk and Good Birth or Safe Delivery) on Oct. 12, 8:30 a.m., at the Chapel of St. Martha in Harrison Plaza.

Our Lady of La Leche is known as the breastfeeding Blessed Mother and patroness of mothers and mothers-to-be. A special blessing of pregnant and childless women, as well as mothers and children, will be given by the Mass presider, Fr. Nick Blanquisco.

Immediately after the Mass, a medical mission for pregnant women and babies up to three years old will be conducted at the chapel. Breastfeeding counseling will also be available. Those who wish to avail themselves of the services must register at the chapel office or call  0915-8831128.

Our Lady of the Pillar

Well-known character actress Lollie Mara, president of the La Hermandad de Zamboangueña Foundation, is confident that Our Lady of the Pillar, patroness of Zamboanga, “will see to it that the MNLF will be contained (in its war with government forces in Zamboanga City) as she has always done.”

With the war raging, prayers are being raised to Nuestra Señora del Pilar. Ruval Magpayo, a devotee, sent us a history of the devotion indicating how Our Lady of the Pillar saved Zamboanga from skirmishes with the Moros during Spanish times.

Our Lady of the Pillar was canonically crowned on her feast day on Oct. 12, 1960, and her shrine was established in what is now called Fort Pilar to show Zamboanga’s love and appreciation for her protection.

La Hermandad will gather at the Sta. Maria Goretti Church at the Pius XII Catholic Center  on Oct. 12, 8 a.m., for the Eucharistic celebration. Right now, they are sending relief goods through the Philippine Air Force C130 plane.

Triduum of Masses in honor of St. Therese of the Child Jesus starts today at 6 p.m. at the  Carmel of St. Therese Convent on 4 Gilmore Ave., QC. Celebrant is Fr. Haluendo Amit, OCD.

The two other Masses will be on Sept. 30, 6 p.m., with Pasig Bishop Mylo Vergara as celebrant; and Oct. 1, 6 p.m., with Caceres Archbishop Rolando Tria Tirona, OCD.

Our Lady of Consolation

This year’s feast of Our Lady of the Rosary, La Naval de Manila will underscore the importance of preaching the Good News, said Fr. Clarence Marquez, OP, director of the Institute of Preaching of the Dominican Province of the Philippines.

Festivities will officially start Oct. 3 with the traditional coronation of the canonical image of La Naval at 5 p.m. Theme is, “Mary, Contemplation and Preaching of the Gospel.”

La Naval 2013 follows the decade-long run-up celebration to the 800th anniversary of the Dominican Order in 2016, Marquez said.

The Dominicans are the foremost and most tireless propagators of the rosary devotion since legend has it that the Blessed Mother herself gave the rosary to St. Dominic.

He explained that the General Curia of the Order of Preachers in Rome has assigned for Dominican celebrations in 2013 the same theme, which draws inspiration from Mary’s fiat in the Annunciation passage in the New Testament, “May it be done to me according to your word” (Luke 1:38b).

The grand procession will be on Oct. 13, 4 pm. The Act of Consecration will be led by lawyer Jo Aurea Imbong, executive secretary for the Legal Office of the Catholic Bishops’ Conference of the Philippines, and consultant to the CBCP’s Episcopal Commission on Family and Life, and the Office on Women.

La Naval is annually held at the Santo Domingo Church in Quezon City, which has been declared a National Cultural Treasure.