The fabulous fraud my husband Dennis foisted on me | Lifestyle.INQ ❮ ❯ 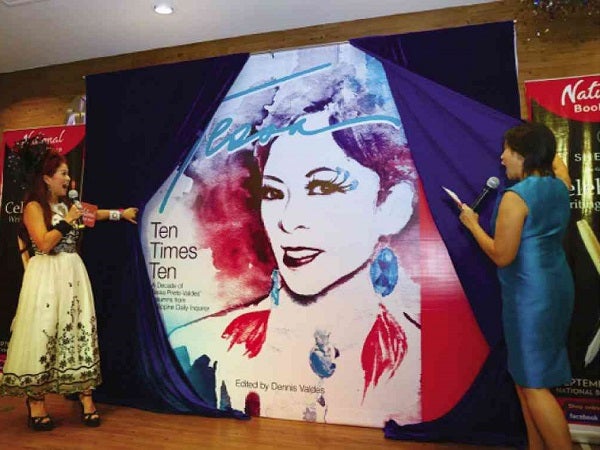 The fabulous fraud my husband Dennis foisted on me

TESSA AT TEN  Tessa Prieto-Valdes celebrates 10 years as a columnist of the Philippine Daily Inquirer in this surprise bash prepared by husband Dennis and the 10 authors of the book entitled “Tessa”  at the National Bookstore in Makati City Sept. 17, 2013. Sandy Prieto-Romualdez, Inquirer CEO and president, was also present in the event. Video by INQUIRER.net’s Ryan Leagogo

Weddings always make me cry. There are just so many emotional moments that touch the heart and make me reminisce about my own wedding to Dennis Valdes almost two decades ago.

I cried again at the beautifully romantic wedding of my cousin Amanda Carpo to her beau Mike Bond. The newlyweds, Mr. and Mrs. Bond, looked as handsome and radiant as one might imagine if James Bond himself were to get married.

Marriage is the greatest expression of love. After that, it comes in different forms.

My notion of ultimate love is to throw a surprise party. Dennis’ is the opposite. At least that’s what I thought.

For the past two years, he had been working on a monumental surprise for me—a coffee-table book called “Tessa: Ten Times Ten” that compiled my best columns over the past decade. He chose 10 collaborators, all dear friends, to write an essay to begin each of the book’s 10 chapters.

Each chapter has a theme: “Fashion” by Lifestyle editor Thelma San Juan, “Fluff and Frippery” by show-biz maven G.R. Rodis, “Fitness” by buff Rosan Cruz, “Fun Philanthropy” by Red Charity Gala co-chair Kaye Tinga, and more. After each essay, the chapter then highlights columns over the decade that fit the theme, each individually chosen by Dennis.

To make the book more interesting, he chose a significant sentence or paragraph from the column, accompanied by one or two pictures blown up on the side. The result is a true labor of love. Eighteen months, 500 columns, 10 authors, are just some of the numbers that make the book so amazing.

Dennis’ main partner in the secret book was my younger sister, Sandy Romualdez, also the president of the Inquirer. Working with Swatch queen Virgie Ramos, they came up with the idea to launch the book at a fake product launch that I was asked to host. Xandra Ramos, Trina Alindogan and Miguel Ramos of National Book Store all pitched in to complete the fabulous fraud.

Finding a launch date was the next challenge, what with my hectic social schedule. But find a date they all did, and I was booked to host a Sheaffer pen launch on Sept. 17. I was actually double-booked that evening, meant to host the opening of Design Matters at the LRI Building, but they had already been forewarned that I would be late.

And so it was that I found myself onstage with Xandra at National Book Store in Glorietta, amidst Sheaffer pen banners and reading out cue cards about what a fine writing instrument it was. As I pulled open the curtain for the reveal, I found not a pen but a backdrop of the book cover, a watercolor by young illustrator Ynna Milambiling.

It’s only then that I realized the surprise, with the guests all cheering and Dennis and Sandy walking up to present me the book. All I could think of was, maybe it’s a coloring book of all my flamboyant outfits! I certainly could not have conceived of the hefty, 32-page tome that I was presented with.

I’ve spent the past two weeks enjoying the book one chapter at a time, because every so many pages I am reduced to tears. I’m sure the final chapter, “Family,” by my eldest son Bryan Prieto, will require me to have another box of tissues on hand.

Browsing through all the miniature versions of my column over the decade is a wonderful stroll down memory lane. I’ve enjoyed remembering all the parties, the product launches, the charity events, the birthdays, and yes, the weddings of the past 10 years. “Tessa: Ten Times Ten” is available in National Book Store Glorietta. Part of the proceeds will, of course, go to my favorite charities, Philippine National Red Cross and Assumption HS ’81 Foundation.

This column is all about Dennis, as it seems he has been preparing a lot for my 50th birthday. In late August, he organized a European vacation for us, which ended with a private cruise onboard a spectacular yacht, the MY Obsessions.

Our whirlwind break started in Eger, Hungary, where I watched him join Team Philippines and play in the World Championships for Underwater Hockey. I was amazed that the seemingly obscure sport drew a thousand competitors from 18 countries. Team Philippines was sponsored by Speedo and the Philippine Sports Commission, among others. It’s great that our national athletes get corporate and government support.

After that we flew on to Bodrum, a port town in southern Turkey, to board the yacht. Obsessions is an amazing boat. It is so fast that we cruised from Turkey to the Greek island of Simi in just a few hours, averaging 25 knots. It is 140-feet long but is completely crewed by just four men. The master stateroom we stayed in had a king-size bed, full bathtub and even a steam room.

We found out that the Alphaland Marina Club is considering acquiring the Obsessions to become the showcase boat of the marina when it opens next year. If so, that will be a beautiful yacht to have in our country, and one that the Marina Club members will have fun chartering to take to the exotic islands of Coron or Boracay.

Hey, it might even be the perfect boat to get married on! After all, isn’t the captain of a ship authorized to perform a wedding? And that would be just about the best surprise for anyone, wouldn’t it?