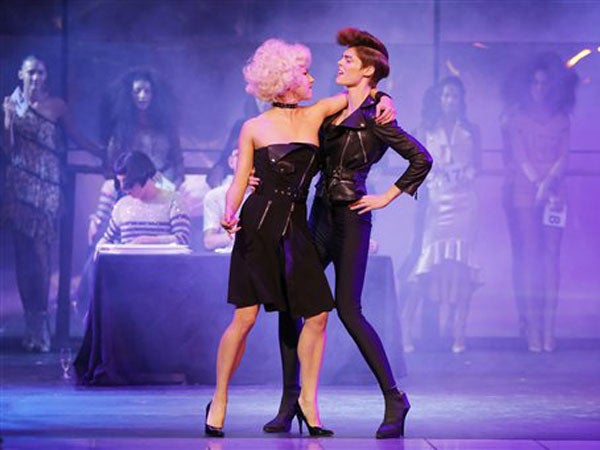 PARIS — The fashion world can be a cruel place.

No one knows this better than veteran Jean Paul Gaultier who decided to turn his spring-summer 2014 collection on its head and do the criticizing for himself.

With a tongue in his cheek, the irreverent designer turned his catwalk collection, one of Saturday’s most popular tickets, into a high-octane pastiche of “So You Think You Can Dance” — the U.S. dance competition show.

Rossy de Palma, the muse of filmmaker Pedro Almodovar, sat on a panel inside the cabaret theater venue holding up signs such as “boring” and “no thanks” to auditioning models such as Karly Kloss who vogued in vain to energizing music.

A theatrical Almodovar-esque scene of wife-beating interrupted the presentation, with de Palma striking the assailant down — a moment of pure pantomime drawing whoops from the crowd.

Such was the audacity that even the normally poised Catherine Deneuve, who sat in the front row, was clapping in time and laughing by the end.

In other shows of the day, presentations were distinctly more restrained — such as that of Belgian designer Veronique Leroy, whose delicately constructed clothes in black and white did the talking for themselves. Monochrome was also seen in a surreal collection by Comme des Garcons.