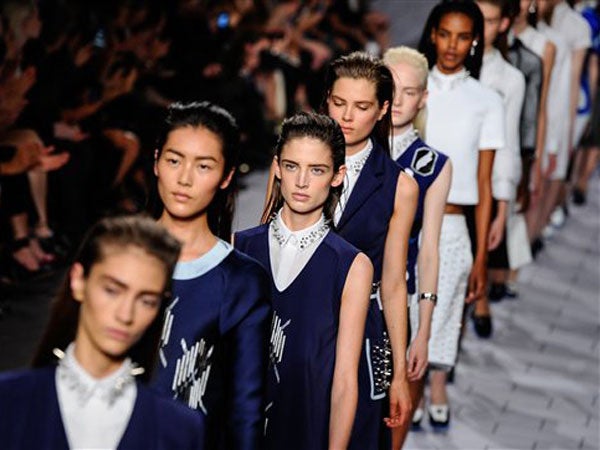 PARIS – Paris fashion this week tiptoed around the scarcity of black models on the catwalk with reaction reflecting the growing controversy surrounding the issue highlighted by models Naomi Campbell and Iman.

Designers told AFP their only concern was to find models who embodied the spirit of their creations irrespective of skin color.

And one industry professional put the lack of black faces down to a minimalist trend that has sparked a demand for Asian models.

“I don’t only do shows for white girls, but I don’t do quotas (either). I choose girls that please me,” said Belgian designer Anthony Vaccarello, whose show included Asian and mixed race models.

Another designer, Damir Doma, told AFP: “I never judge anyone by skin… I’m looking for the right personality.”

Doma’s show featured one black and two Asian models but the number could “be more or less,” he said.

“It depends on the season and the girl that comes to the casting. If she’s right for the clothes I would definitely take her,” he said.

Their comments follow a letter sent earlier this month to fashion governing bodies around the world by models Iman, Naomi Campbell and US model-turned-activist Bethann Hardison.

In their letter, the trio condemned fashion houses that used just “one or no models of color” for a collection, saying the result was “racism”, even if it was unintentional.

Virginie Deren of the agency Ford Models Europe stressed the importance of trends in the industry.

“For the last two or three seasons, there has been a real passion for Asian models, especially Chinese ones,” she said.

Chinese consumers have become increasingly important to the fashion world as their economic power has grown in recent years.

Other trends down the years had seen black models in demand as well as Belgians and what Deren called “healthy Americans.”

“We have black models (on our books) but we are not asked for them for the catwalks (at the moment).”

“It’s not racism. Things are not like that. Models have to fit in with trends (and) the current fashion is a minimalist one that the designers associate with Asian girls,” she said.

In their letter, Campbell, Iman and Hardison named dozens of labels they considered to be most at fault including Calvin Klein, Donna Karan and Marc Jacobs.

“Eyes are on an industry that season after season watches fashion houses consistently use one or no models of color,” they wrote.

“No matter the intention, the result is racism. Not accepting another based on the color of their skin is clearly beyond aesthetic…,” they said, adding that the issue was specifically a lack of black models, not Asian ones.

Malaika Firth, 19, in Paris for her first catwalk shows, said she had not experienced any difficulties she could link to skin color but stressed that she was mixed race, not black.

“So far so good…, I support equal opportunities,” said the half-British, half-Kenyan model who has appeared in advertising campaigns for Burberry and Prada.

Other models with more catwalk experience, however, were more nuanced.

Brazilian model Muriel Beal, 31, said that there were too few black models working in the industry.

But when asked if the lack of black faces at shows was for this reason or due to discrimination she replied: “It depends.”

Others attending shows who were not employed in the industry expressed more robust views.

Some made it clear that they would like to see a concerted effort by designers to address the issue once and for all.

French visual artist Abby Regis, said he was appalled by the situation. “It is shocking,” he said.

“You can do what you want to do but I see some designers using black models,” he said, making it clear that if it was possible for some, it should be for others.

Laura Bestle, a 23-year-old German international business student, said she suspected some fashion houses included a single black model as a way of “getting critics off their backs.”

And she said described the idea black models were not cast because they were not right for particular clothes as “just an excuse.”