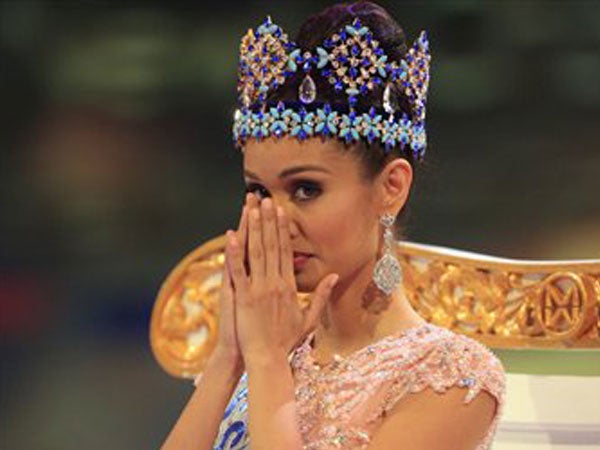 MANILA, Philippines – The Philippines — where beauty contests are a serious affair — celebrated on Sunday its first victory in the Miss World contest despite hardline Islamic protests against the event in the host country Indonesia.

The triumph of 23-year-old Megan Young was the main headline in major newspapers, who noted that it finally gave the Philippines a winner in all major beauty pageants after several victories in the Miss Universe and Miss International contests.

“This is another Filipino who has gone out there… and shown the rest of the world what we can do as Filipinos and another reason for us be proud,” Carandang said.

“Finally, the blue-beaded crown for the Philippines,” the Manila Bulletin said in its main story.

The newspapers also mentioned the tight security at the Miss World pageant in the Indonesian resort island of Bali, following weeks of hardline Muslim protests that forced the event to be relocated from its original planned venue near Jakarta.

Thousands of protesters had earlier taken to the streets across Indonesia, the world’s most populous Muslim-majority country, to denounce the contest.

But in the mainly Roman Catholic Philippines, the victory of Young — a film student at a prominent university — was a cause for celebration especially on social media.

“Feeling proud. The beauty of the Pinay (Filipina) has come out on top,” said one message on Twitter.

“I’m so proud of you Megan. You prove that we’re beautiful. I’m proud to be a Filipino,” another message read.

Beauty queens in the Philippines have often gone on to successful careers as actresses and fashion models.

But Young is already a showbiz veteran, having hosted and starred in several TV shows and movies since 2005.

Earlier this month the national director for the Philippine licensee of Miss World charged that there was a “smear campaign by a negligible sector of the Philippine pageant industry” against Young.

Although the details of the campaign were not given, Philippine beauty pageant blogger Joyce Ann Burton Titular said steamy photographs of Young, taken last year for local men’s magazine “Rogue”, had been circulating internationally.