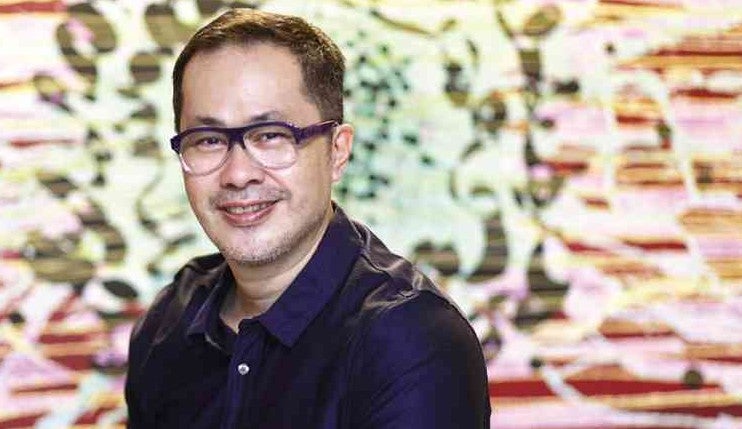 The recent art exhibit “Inspired by Gardens,” held at Pinto Art Gallery in Antipolo Aug. 25-Sept. 11, featured 11 artists invited to unleash their vibrant, varied visions of what fauna should look like.

Dominating one wall at the gallery, hard to miss for the sheer impact of their predominantly electric-blue and bright-orange colors, were six large acrylic-on-canvas paintings by Ricky Villabona, who came up with the playful works in a mere two months, after an unexpected invitation from Pinto’s moving force, Dr. Joven Cuanang, to join the show.

If Villabona’s ease with the medium comes as a surprise, considering that this was his first time to exhibit, it could be because the photographer-turned-TV-commercial-director-turned-artist (although none of those roles exclude the others, apparently) has been beating a creative, albeit circuitous, path to the canvas most of his life. His artworks could then be considered products of both fate and serendipity, happily nudged by technology.

“I even took up painting lessons before, and rented a studio to paint, but I stopped because I hated the smell of oil and turpentine,” Villabona recalls. “It was costing me my respiratory health! So I stopped painting, and forgot about it until last year.”

The comeback began with another detour: an interest in making music. Villabona was then attending a seminar on creativity by Landmark Education.

“I shared that I wanted to make music even if I didn’t know anything about instruments. The only thing I could do was sing and write words.” Someone suggested getting an iPad and fiddling with an app that had ready-made chords. Villabona even got as far as writing a song and submitting it to a pop music competition!

Soon, toying with his gadget, Villabona was doodling stuff that he shared on Instagram and Facebook, and friends encouraged him.

“I was even thinking of printing them on shirts or bags or scarves,” he says.

When a friend gave him a DVD about artist Yayoi Kusama, Villabona was delighted to discover that she actually painted with markers on canvas.

“I had markers. I had canvases. I could draw. So I used markers on canvas. I didn’t have to deal with the smell of oil and turpentine! Wonderful!”

“At first, I felt downhearted because it seemed there was so much work to do. I listened and took the advice of my friends, and added acrylic to the mix.”

It was Dr. Cuanang and show curator Jim Orencio who had the idea to group Villabona’s works into a set of six, as the paintings all seemed organically related, like the lines and hues were growing and oozing into each other.

“My paintings are like games I play with myself. I did not know where exactly it was going. I would paint something and allow it to tell me what to do with it next. Sometimes I would intentionally splatter something on the painting, and deal with that. I wanted them to be big masses of orange and blue, with all these details in which you could be engulfed. I wanted the feeling of swimming or drowning in the paintings.”

It has been quite the creative adventure for this Ateneo Communication Arts graduate, who started his career as an assistant photographer at Chroma Studios with Pancho Escaler and Bien Bautista. He moved on to copywriting in an ad agency before freelancing as a writer, and then as a photographer. Running his own studio, Villabona did a lot of fashion, advertising and celebrity shoots, and even exhibited his work.

“I was supposed to be making money, but I was not feeling any of the money coming,” he recalls. “So I decided I wanted to be a cinematographer na lang and just show up for shoots.”

He took some filmmaking classes in Mowelfund, and after submitting a video compilation of hair shots, was soon hired to shoot his first commercial. He has done several personal product ads since then.

It was another lull in work, however, that led Villabona to explore other outlets. “I was actually worried that projects were not coming in, but I guess the world conspired to give me the time I wanted for painting, so I got it. The last several months have been devoted to painting. It’s actually great to have time for myself, because I had gotten used to responding to various expectations and demands from clients and agencies. Painting is a way to develop an artistic voice, devoid of marketing and advertising concerns.”

Villabona makes a clear distinction among the different hats he has worn.

“Directing film and video is different from painting and photography because you’re putting together a series of pictures that have to make sense together. Those pictures are in conversation with each other. It’s much like stringing a sentence together. The great challenge with photography and painting is in how you can create that sentence with a single image.”

Today, he’s happy finding a lot of inspiration for his art in pop culture. “I think I’m influenced by the printed image. I derive imagery from existing art, comic books, textile prints and album covers. I actually want to see my art someday on scarves and fashion accessories.  It would be great to see people walking around wearing something I painted.”

Yes, he’s still a TV-commercial director, and may even make a movie someday. With Ricky Villabona, who knows?

“But this new thing with art opens my mind again to so many things. It feels like adolescence again.”