For Jaime Ponce de León, the man behind León Auctions, questions about the authenticity of a work offered for auction must be addressed firmly and formally.

He said that when he learned that there were questions about the authenticity of Jorge Pineda’s “Las Buyeras” (Betel-Nut Vendors) from the descendants of the artist themselves, he immediately issued an alert for interested bidders.

“León Gallery has received unconfirmed reports that people asserting to be descendants of Jorge Pineda claim that they are in possession of the ‘Las Buyeras’ painting that won in the St. Louis Exposition in 1904,” the disclaimer said. “These persons have not contacted either the gallery or the consignor.”

The Pineda painting to be bidded out belongs to the collection of the late National Artist for Literature (and former Secretary of Education) Alejandro Roces, said Ponce de León.

“Some knowledgeable art collectors have known the painting owned by Dr. Roces as the award-winning painting,” León Gallery’s disclaimer said. “Tomas Bernardo in 1979 and Maita Reyes in 2013 had done conservation and restoration work on the painting. Prospective bidders are hereby put on notice about the alleged claim.” 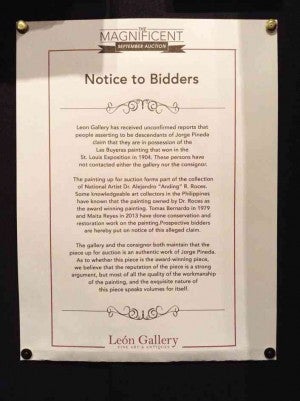 León Gallery maintained the Pineda work in its auction was authentic: “The gallery and the consignor both maintain that the piece for auction is an authentic work of Jorge Pineda. As to whether this piece is the award-winning piece, we believe that the reputation of the piece is a strong argument, but most of all the quality of the workmanship of the painting, and the exquisite nature of this piece, speaks volumes for itself.”

For Ponce de León, the controversy seemed to have relived an incident in 2011 when, during the ManilArt fair, rumors circulated that a Fernando Zobel displayed by his art gallery was a fake.

Ponce de León approached the fair organizers and asked that the issue be addressed. But no action was taken since no formal complaint had been filed.

A fair participant, owner of a very respected Manila gallery, lamented the rumor-mongering and “witch-hunt.”

The issue became a case of serendipity when the work was bought by the artist’s relative. Industry insiders called it “a case of a Zobel [being] bought by a Zobel.”

Despite the bad experience, Ponce de León is not bitter. Perhaps because he hails from the South (Dumaguete, Negros Oriental), he’s affable, optimistic, and full of solicitude.

Well-traveled and cultured, he sees his auction business as helping foster better and wider appreciation for Philippine art.

De León added that in small auction houses in Europe, one would see an exciting battle of paddles where first-time bidders or small collectors took part, all of them holding high hopes of owning a coveted or rare piece.

Even better though, in the Philippines, with heftier beginning prices, are chances of snapping up 17th-century Hispano-Philippine religious pieces that have come home from Europe or elsewhere in the world.

Such are the perks that have both new and seasoned collectors quite happy with León Gallery’s continuing efforts at offering the greatest possible opportunities for collectors to expand or improve their collections.

Ponce de León said he aimed, with each auction, to “try to reach a wider segment of the market.”

“I have things for everybody,” he said. “It’s always varied and that will always be the character of a León auction.”

For those who love realist paintings, León offers works from Fernando Amorsolo to Serafin Serna.

For people who love contemporary art, the auction has everyone “from Ventura to Esquillo, Barrioquinto to Jigger Cruz.”

For abstract lovers, the house has “Zobel, Olazo.”

These names were in last Saturday’s  Magnificent September Auction.

He pointed out that many of the country’s art greats started in art galleries along Mabini Street in Ermita.

“I don’t think it’s for me to dictate what people buy or how people should buy,” he said, pointing out that art buying and collecting was a matter of personal choice that must be respected.

Because of authenticity and provenance issues haunting the art industry, concerned people are urging transparency.

Amy Loste, head of the National Commission for Culture and the Arts’ National Committee on Art Galleries (NCCA-NCAG), said: “We urge parties who have questions about the authenticity of artworks to come forward and formalize their concerns. Faceless and nameless allegations are detrimental to the Philippine art industry. They could tarnish our reputation on the international art scene.”

Loste added: “That is why we at the NCCA-NCAG, through ManilArt 2013, will conduct a forum with family members of noted late artists such as Federico Aguilar Alcuaz, Onib Olmedo and National Artist Fernando Amorsolo on ‘Preserving Artistic Legacy,’ because recurring and escalating issues on authentication must be thoroughly discussed.”