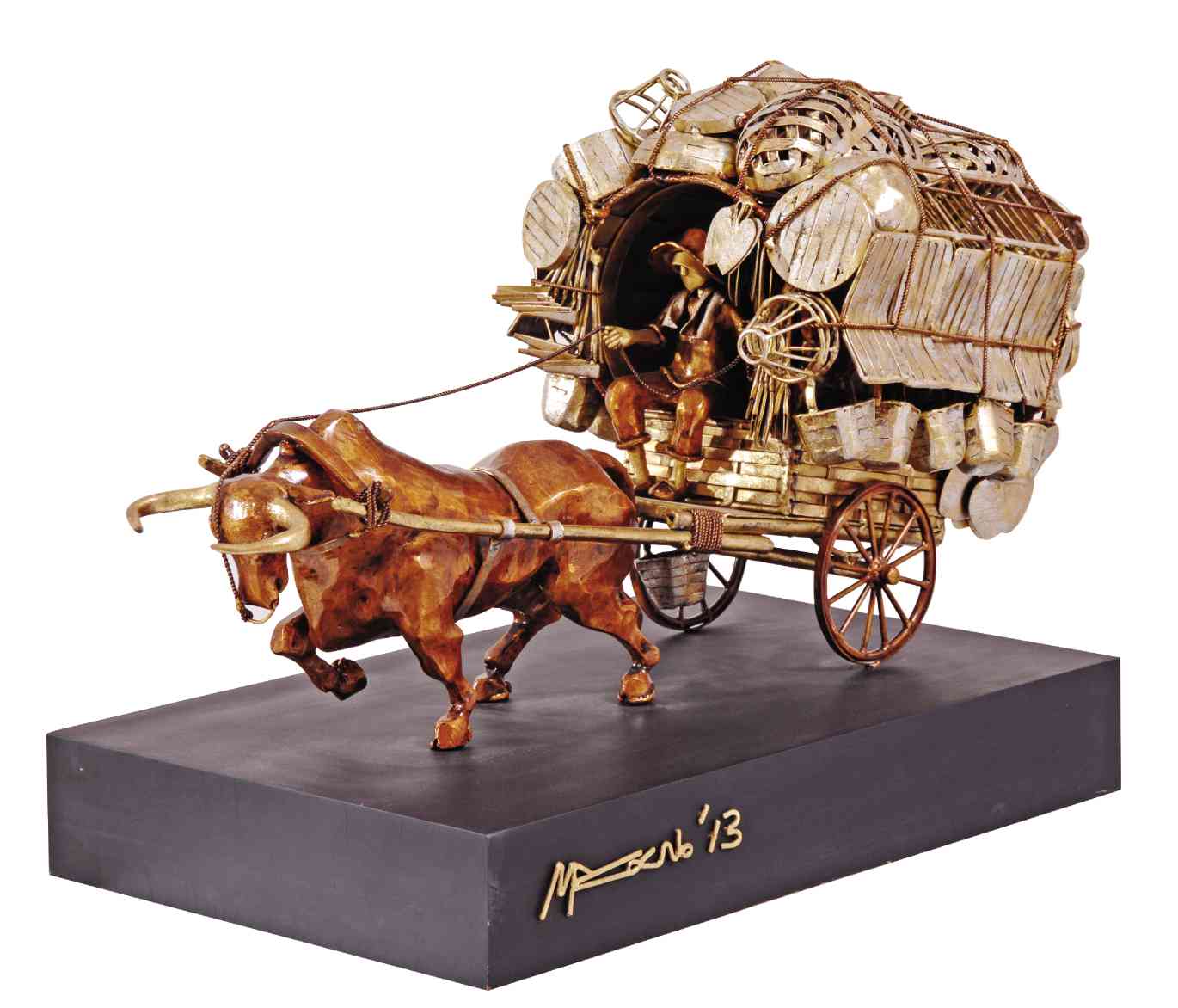 Dominic Rubio, known for his paintings of colonial imagery, and Michael Cacnio, famous for his ability to capture the psyche of the Filipino in his slice-of-life sculptures, partner in an exhibition on the Philippine genre motif of market vendors.

The vendor motif originated in the “tipos del pais” garden scenes popularized in 19th-century paintings. It later evolved in the early 20th century during the pre-Modernist period to encapsulate the practice of National Artist Fernando Amorsolo, who painted market scenes  brimming with light and color.

It was the Modernists, however, who used the motif to demonstrate their new aesthetic direction—distorting and abstracting the figures to show multiple perspectives, expressions and gestural approaches.

Rubio and Cacnio, two major names in art today, are inheritors of this tradition from Damian Domingo, Malang, Amorsolo and Manansala.

Rubio has joined several exhibitions in New York, Hong Kong and Singapore. His signature technique of elongating the necks of figures from the Philippine colonial period has made him a sought-after artist and a staple of international auction houses.

A Fine Arts graduate from University of Santo Tomas, Rubio is one of the most celebrated visual artists today, with no less than art critic Cid Reyes commenting: “Arresting is the punctilious application of pigment and the delineation of the figures… technically adept, Rubio displays impressive workmanship.”

Cacnio is perhaps one of the foremost sculptors in the country today. Having had over 50 sold-out solo exhibitions in the US, Europe and Asia, Cacnio’s candid depiction of tableaux scenes of the Philippines has been noted by critics as representing the best of genre in sculptural form.

The artist has achieved a fair measure of awards in his 26 years in sculpture, including the 2006 Ten Outstanding Young Men (TOYM).

A product of the  University of the Philippines College of Fine Arts, Cacnio is also the first—and, so far, the only—Filipino artist to exhibit at the Berlaymont in Brussels.

In Rubio’s practice, the nostalgia is brought forth in his treatment of the subjects and the colonial contexts he places them in. He is a brilliant character painter.

Cacnio takes a similar approach to his sculptural practice. Highly sought-after for his genre sculptures of brass and glass, Cacnio takes a wistful image of bygone times and asks his audience to reminisce about the idyllic life of the rural past.