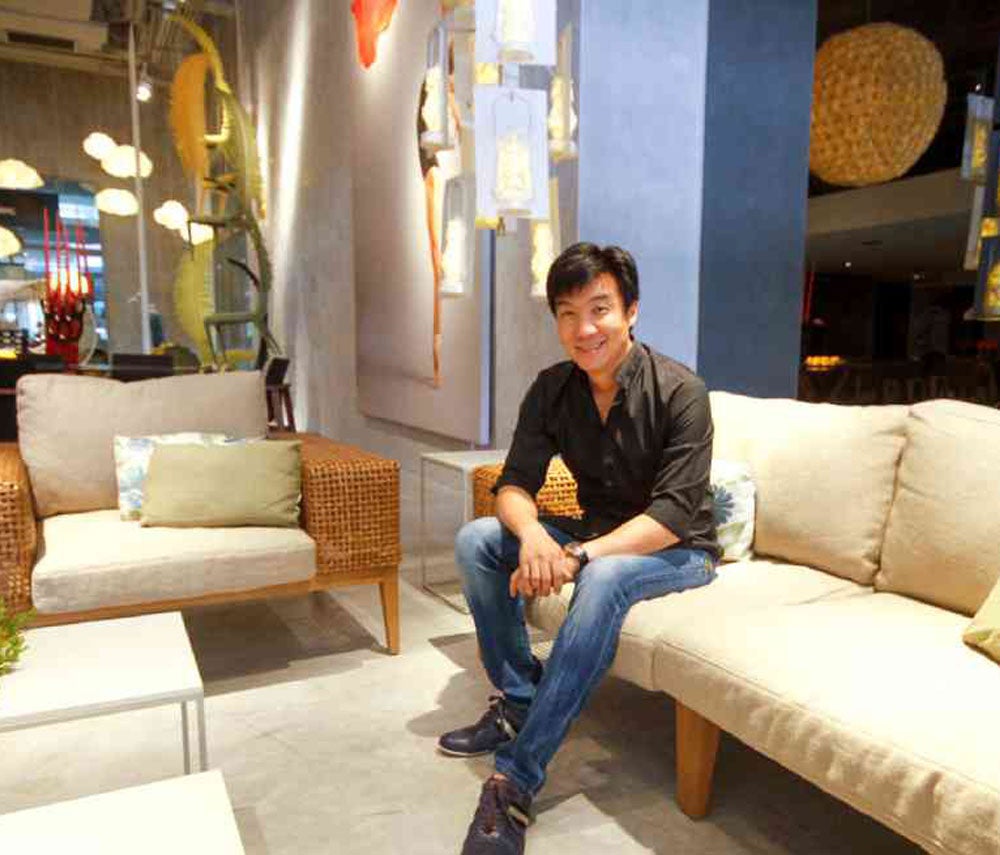 It may be more compact than their sprawling space in Mactan, Cebu, but the newest showroom of Kenneth Cobonpue in Makati is much larger than other furniture stores. The space, located on  the ground floor of The Residences at Greenbelt on Arnaiz Street (Pasay Road) carries many of the industrial designer’s popular pieces.

Two Bloom chairs are positioned by the plate glass windows fronting Greenbelt 3. Beside it is a bicycle with a luxurious sidecar and circular “windows” that offer lucky passengers a 180-degree view.

In the showroom are more of the designer’s iconic chairs: There’s a red Yoda with its “unfinished” backrest; the deceptively simple Tilt armchair; the Dragnet chair with its net-like detail; and the Papillion armchair with towering wings that mimic that of a butterfly.

Scattered around are several Chiquita stools that are actually comfortable to sit on. One wall is festooned with Zaza chairs, their carefully formed backrests in shades of green calling to mind tropical fronds.

“We weren’t able to display all the designs at once, which is good because we can always have new things when we change the displays every three or four months,” Cobonpue told Inquirer Lifestyle in this exclusive interview.

“All the classics are here. We created vignettes including an ‘outdoor’ space, living areas, an office, dining and entertainment areas. On the second floor is a bedroom and another living space.”

Cobonpue said that they were the first tenants at The Residences at Greenbelt last year, but that they didn’t rush to open because “I wanted it to be perfect.” He wasn’t kidding. On the day of the interview, we spotted him personally arranging the bright yellow-themed outdoor vignette facing Arnaiz Street. Later, he folded a fabric throw whose fringed hem was touching the floor.

For several years now, Cobonpue had his showroom in Mactan to showcase his pieces, as well as the different boutiques and furniture shops worldwide that carried and promoted his creations. The opening of the Makati showroom came about because he felt he had enough designs to fill the space.

“It took me 15 years before I could finally say I could open my own standalone showroom. I considered opening in Barcelona or Miami, but in the end I said it had to be in Manila because I’m a Filipino and this is where I belong. After going around the world for 15 years, it was time to come home,” he said.

Now, local clients can order his works and expect to receive them in three to four days. “We will have stocks of the best-selling pieces in Cebu. Other designs might take longer to deliver especially if the client wants the piece or pieces in a certain color or finish.

“That’s the good thing about manufacturing here. We can custom-finish down to the exact shade; it’s like a Birkin bag,” he said, referring to the luxury bag from Hérmes.

Cobonpue admitted, however, that to open a store requires hard work. In time, he said he might consider replicating this boutique in other cities in the world.

He said that the new space is a collaborative effort between his friends—designer Budji Layug and architect Royal Pineda who designed the place, and J. Anton Mendoza who took charge of the styling.

But Cobonpue knew the look he wanted: very industrial with poured concrete floors and unfinished walls. “My furniture has always been warm, organic and natural, so the concrete, the coldness, and the mirrors bring out their warmth. I wanted this industrial look, but one that was very refined, hence the addition of well-placed lights.”

Aside from his chairs, sofas and nesting tables, the designer’s lamps and lighting fixtures are a sight to behold. Using different, locally sourced materials, he has come up with designs that mimic fluffy clouds, a floating village, traditional oil lamps, and armadillos.

“When we change the collection after three or four months, we might have to close the store for several days. I don’t think I can do it in one day because it takes time. We’ll have to clean everything here and redesign the space. The lamps will change, that’s what’s going to take a long time—the placement of the lamps,” Cobonpue said.

Redesigning the showroom may be tiring, but somehow it’s something he’s already looking forward to.