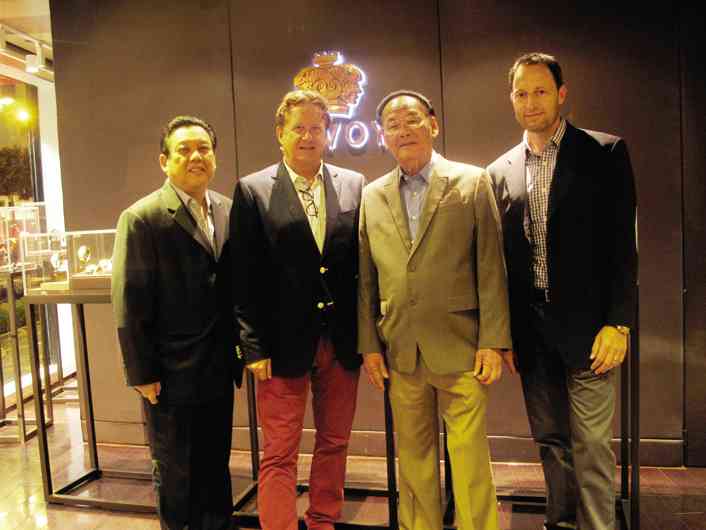 Like all Swiss-made watch brands, Savoy (pronounced sav-wa) is proud of the Swiss ingenuity and craftsmanship that go into each of its timepieces.

But, as Pascal Savoy, the company’s Swiss founder and CEO, insists, his eponymous watch line isn’t a “heritage brand.” Instead, he’s positioning the two-year-old brand as “a new standard in accessible luxury” aimed at bold, innovative people with good taste.

The US-based Pascal even picked an unlikely city like Manila to reintroduce Savoy globally. Before he opened the brand’s first-ever boutique at the New World Hotel in Greenbelt last May, Savoy was confined mainly to watch stores and duty-free shops in key cities in the US and other parts of the world.

He recently visited Manila to reconnect with his partners here and grace the launch of a duty-free stand featuring Savoy watches.

“This is so far Savoy’s only boutique,” says Pascal, who started his career in the luxury industry with beauty products and fragrances. “It’s important that we communicate to the world

first what the brand is all about before we open more boutiques.”

Savoy offers men’s and women’s lines either with leather or stainless steel bracelets. Prices range from P50,000 to as high as P90,000 for the diamond-lined ladies’ watch. All watches have similar stainless steel dials in 45, 41 and 35 mm cases.

“Our prices may be affordable, but we don’t sacrifice quality,” he assures. “Instead of paying huge sums to celebrity endorsers, we spend the money on quality components to provide our customers with luxury watches they can afford.”

What sets these watches apart are add-on bracelet inserts exclusively made by Savoy and fashioned from such materials as leather, carbon fiber, ion-plated steel and python.

“Each watch comes with its own pair of inserts,” says Pascal. “You can buy additional inserts later on to replace or add to the ones you have.”

Each pair of inserts comes with four screws that attach securely on the bracelet. Once in place, they can instantly change the look of the watch to match the occasion as well as the wearer’s outfit and mood.

“You can change the inserts yourself, but we would prefer that you come back to the store so we could do it for you,” says Pascal. “It’s one way of maintaining our relationship with our clients.”

Pascal entered the watch industry 15 years ago. In 1999, the Geneva native moved to Florida to become president of Hublot America. In 2004, he founded his own branding and product development company after realizing that there was a void in the watch industry for Swiss-made watches that combined unique iconic designs with reasonable prices.

In 2009, he finally decided to create his own brand with a name and logo that are deeply rooted in the Geneva region. As far as marketing was concerned, Pascal and his collaborators felt that the choice perfectly represented the character the brand wanted to convey: “strong, yet refined.”

After two years of product development, Savoy was finally launched globally at the 2011 Basel World Fair. Critics hailed it as one of the most “innovative” designs in its price category.

Within the next year or so, Pascal plans to open several standalone boutiques, particularly in Hong Kong, Singapore, Tokyo and the Middle East. But Manila will always have a special place in his heart, he says.

It was serendipity that led him to open his first boutique here. Like all newbies, Pascal was looking for the right partners during his initial quest to expand abroad, particularly in Asia. He bumped into Filipino businessman Chito Bautista in, of all places, a luxury cruise in the high seas.

Bautista, big boss of Timebound Trading Inc., is the exclusive distributor of Savoy watches in the Philippines.

“As concessionaires, we have a strong presence selling watches in several cruise ships,” says Pascal. “Mr. Bautista and his family were then on a cruise in the Mediterranean when he was drawn to our watches. He ended up buying one. It so happened that I was also there.”

Pascal took a chance by telling Bautista that he would like to do business with him in Manila. Was Bautista willing to be Savoy’s exclusive distributor in the Philippines? It didn’t take long for Bautista to say yes.

As for Pascal, he sees the Philippines as a “very trendy” market that fits a young brand like Savoy’s positioning.

“China, Hong Kong and Singapore are already congested markets,” he says. “As a small brand, we want to set foot in a market like the Philippines when things are still growing, and not when we’re already competing with the biggest.”