Marvel arrives in Manila with a Kapow! | Lifestyle.INQ ❮ ❯ 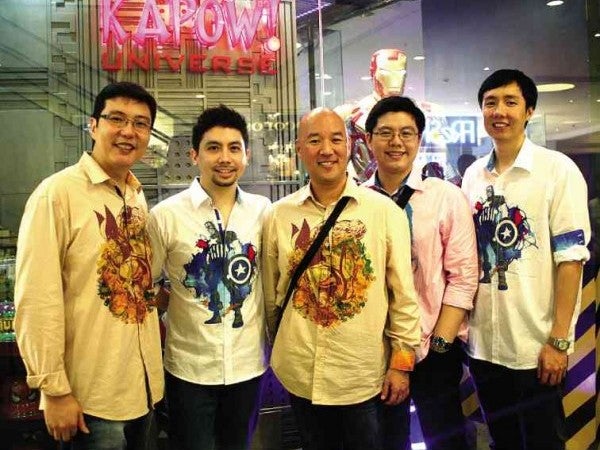 Marvel arrives in Manila with a Kapow!

Do you swing for Spider-Man? Do you go green for the Incredible Hulk? Is your devotion to Iron Man invincible? Do you have a penchant for The Avengers, or are you a fan of the Fantastic Four?

Then it behooves you to visit the first store in the Philippines to carry all official merchandise based on those iconic characters of Marvel Comics—a store with the fitting name of Kapow! Universe.

Alan Oda, MINDstyle vice president for operations, made a guest appearance at the launch and explained the logic behind an exclusive Marvel store in the country: “We’ve always known there’s a huge fan base here for Marvel characters and we saw there was an opportunity to provide quality, officially-licensed products for the market, so we thought we’d fill that void … We’ve seen the passion here for the Marvel brand.”

The Philippines store is only the second Kapow! Universe outlet after the first one opened in Beijing; Alan said more stores are in the works, possibly even another branch in the country.

Ivan said that talks to bring Kapow! Universe to Manila began in May, just months after the relaunch of the Filbar’s franchise. “We were looking for new licenses to bring in and MINDstyle was one of the first we approached,” he recounted. “At the same time, they were like, ‘Oh, we have this concept, are you interested?’ And we’re like, ‘Marvel? Of course! Oh my goodness!’”

Ivan pointed out that the country is, indeed, full of Marvel fanatics. “We grew up with Marvel,” he said, recalling that Filipino kids read the comics, cartoons and the Spider-Man strip that were syndicated in local newspapers.

With the success of the movies based on Marvel characters, Ivan said “the world is more Marvel now in general.” The store owners have their Marvel favorites: Eric (X-Men), Jacob (Spider-Man), Kenneth (Avengers) and Ivan (Fantastic Four).

Kenneth noted that many Filipino artists have worked with and continue to work with Marvel. (Witness the brilliant work of Leinil Yu and Gerry Alanguilan currently on Marvel’s flagship monthly series “Avengers”). The vintage Marvel comic books on display in the shop window are from Kenneth’s personal collection.

The store owners had to go through several levels to get ultimate approval from Marvel’s parent company Disney. It was finally green-lighted in June, with Ivan and Jacob coming up with the idea of designing the store to resemble the interior of the Helicarrier, airborne headquarters of the global peace-keeping agency S.H.I.E.L.D., featured in the 2012 box office behemoth “Marvel’s The Avengers.”

They kept consulting with MINDstyle until they came up with the final Kapow! Universe look, one full of little details for the hardcore Marvel zombie. While a life-sized Iron Man Mark 42 stands sentinel in the window, there’s Thor’s hammer Mjolnir inside embedded in some rocks (Try lifting it—the light show makes you feel like a thunder god).

The dressing room is designed to look like a gamma radiation chamber right out of “The Incredible Hulk,” and there’s even a radioactive spider dangling from the ceiling if you can find it.

Jacob said that it was highly serendipitous that the new TV series “Marvel’s Agents of S.H.I.E.L.D.” premiered on American television just days before the opening of Kapow! Universe.  “We came up with a concept for the store, and they were just shooting the pilot for the series. We didn’t know if it would get the green light or not.”

As one would expect, Kapow! Universe has graphic novels, plushes and action figures. But there are also USB drives, key chains, caps, mugs, bags, cologne and anything else you can put a Marvel super-hero on.

The big deal is the exclusive items that you won’t find anywhere else, the most amazing of which is the selection of eye-catching T-shirts. “What’s good about Marvel is that it’s a merchandising power now that it’s with Disney,” Jacob said. “We have so many choices. I think it will be fresh, month in and month out.”

The store’s look will shape-shift to complement the Marvel property of the moment. Right now, the magic hammer and the items on sale reflect the fact that “Thor: The Dark World” will teleport into theaters in November. Next year will see films featuring Captain America, Spider-Man, the X-Men and the Guardians of the Galaxy.

It’s a great time to live in the Marvel Universe. “It’s just the perfect time to have a Marvel store,” Ivan said.

Kapow! Universe is at the 2/F, Glorietta 5, Makati City.