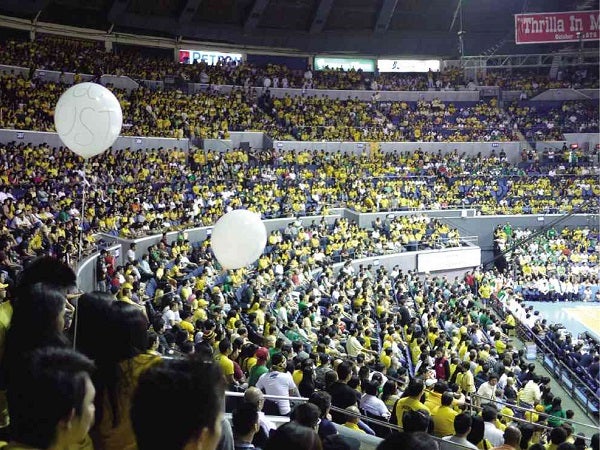 ARANETA Coliseum was a sea of yellow and green.

Araneta Coliseum was transformed into a sea of yellow and green at the first UAAP Season 76 finals game last Wednesday, between the University of Santo Tomas (UST) and De La Salle University. The Growling Tigers battled the Green Archers in an exciting game which ended with UST winning by a squeaker, 73-72.

Our eyes weren’t just on the skillful basketball players, but on their fans, the tireless supporters who cheered, screamed and clapped all throughout the intense season. We spotted families in green, students proudly wearing their tiger ears and paws, barkada that were a mix of UST and La Salle fans, groups carrying around giant cutouts of the players’ heads. We even saw Beijing the Little Tiger, a young Growling Tigers devotee who has become such a hit with UAAP followers that he now has his own Facebook fan page.

After the game, UST’s Jeric Teng tweeted: “Thanks to all who watched live and supported us! You gave us energy!!!”