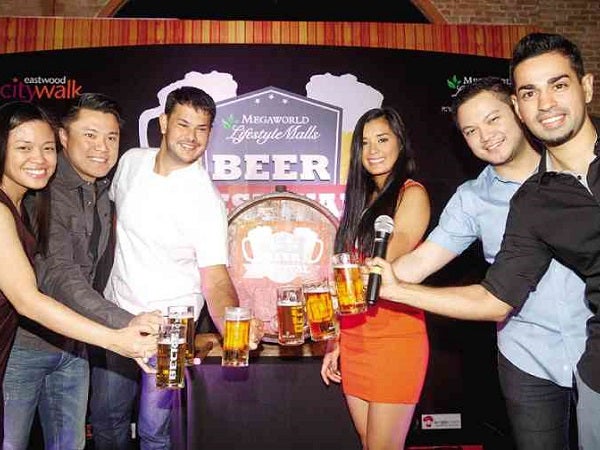 A toast to beer-y nights

From spring-water beer that guarantees no hangover, to caramel beer that reminds us of butter beer from “Harry Potter,” the Megaworld Lifestyle Malls Beer Festival offers 150 varieties for beer lovers and the curious alike.

The festival kicked off on Sept. 24 with a ceremonial keg-tapping led by Kevin Tan, Megaworld first vice president, and chef Carlo Miguel, co-owner of Publiko Eat + Drink, a gastropub in Eastwood City where the launch was held.

A promotional show for the fest featuring Up Dharma Down, Urbandub, Pupil and Rico Blanco was held Sept. 27 in Eastwood Central Plaza.

More gigs, beer samplings and promos are set in Eastwood City, Quezon City, and Venice Piazza in Taguig this month.

“Filipinos love beer,” Tan said. A beer-chart brochure is available in Eastwood that serves as a guide for the public. (See sidebar). It lists the beer varieties (lager, ale, craft), brands and where to buy them in the festival grounds. Booths and bars will be serving local and imported beer, plus bar chow.

Chef Miguel said the celebration also promotes beer and food pairing. Paulaner, for example, is a German wheat beer usually paired with sausages or fish and chips. For something lighter, beer can also be enjoyed with green salad with goat cheese.

Unlike Oktoberfest in Germany where only one kind of beer is served, Miguel said the Megaworld Beer Festival—the first in the country—encourages participants to try something new. How does Elder Flower Beer sound like? That’s beer infused with gumamela syrup from Bone and Barrel Bistro.

Rue Bourbon’s Caramel Beer is a creamy concoction with a hint of sweetness. It tastes so wholesome that one may forget it’s beer—or that one has already drunk a liter.

Of the 150 kinds of beer in the festival, around half are from The Distillery, a pub for beer geeks and party-goers alike. It offers unique finds such as Tuborg Green, Savanna Dry Premium Cider, La Guillotine—all available in a display fridge. Marketing head Jave Maceda suggested starting off with a Mexican beer, which is akin to local beer. Among these are Dos Equis Lager, a light malt beer with crisp finish, and Dos Equis Ambar, a full-bodied amber lager.

Distributor John Moore brought Bavaria beer from Holland to the Philippines with a promise of “no hangover.” In fact, he tested it on himself and his willing friends. The secret, he said, is spring water.

Brewed with mineral water from its own spring, the Bavaria brand has 5 percent alcohol and is clean and very light in taste. For something stronger, there’s Bavaria 8.6 Red loaded with 8.9 alcohol. It comes in a 500-ml can.

Make sure to check out Katipunan Craft’s booth for its Indio Pale Ale. It is a bold, full-bodied craft beer with 4.8 percent alcohol in nifty packaging. Miguel Buling, Kiyo Miura and some friends co-founded Katipunan Craft, an independent microbrewery that produces beer in limited quantities.

Check out the Beer Tent in Eastwood Central Plaza, with gigs every Thursday, and a finale on Oct. 25 to close the festival. (See sidebar for schedule).

Enjoy the brew, but it’s good to avoid having a beer belly with this reminder from chef Miguel, a participant in “The Biggest Loser Asia” who has become a triathlete: “Have one beer; don’t drink 10. Then run it off the next day.”