Three icons reunite in ‘The Legends and the Classics’ | Inquirer Lifestyle ❮ ❯ 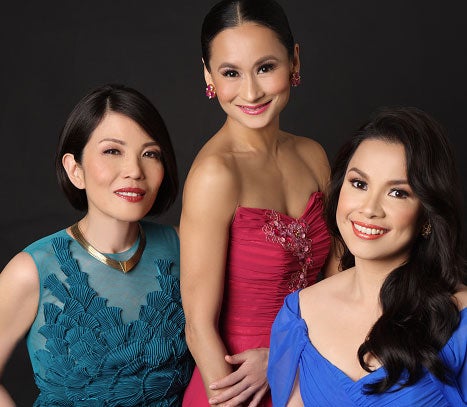 Three icons reunite in ‘The Legends and the Classics’

MANILA, Philippines—Three iconic Filipino artists—Lea Salonga, Cecile Licad and Lisa Macuja-Elizalde – reunite onstage in “The Legends and the Classics Encore” for an incomparable showcase of song, music and dance.

Presented by the Manila Broadcasting Company and Ballet Manila, “The Legends and the Classics” returns on October 12, Saturday, 8 p.m., and October 13, Sunday, 5 p.m., at the Tanghalang Nicanor Abelardo (Main Theater) of the Cultural Center of the Philippines.

The concert brings together anew the outstanding talent and impeccable showmanship of three Filipinas who have shone brightly on the international stage and brought home countless accolades for their country.

Each of them represents a lifelong dedication to the arts – in theater, music and ballet – where success is forged only through long years of training, unwavering commitment and an ironclad will in pursuit of excellence.

“The Legends and the Classics Encore” will highlight individual spot numbers, including medleys of Broadway hits and romantic standards from Salonga, immortal piano pieces from Licad and lyrical ballet numbers from Macuja-Elizalde. But what will make it even more unforgettable are the triumvirate’s collaborative performances.

“The Legends and the Classics” was the winner of last year’s Aliw Award for Best Concert Collaboration. Coincidentally, the three stars have received top accolades from the same awards-giving body in different years. Macuja-Elizalde was 2012 Aliw Entertainer of the Year, the first classical artist so honored. Licad was the 2010 Aliw Lifetime Achievement Awardee. Salonga was Aliw Entertainer of the Year in 2004. Even concert director Roxanne Lapus was Aliw’s Hall of Fame Awardee in 2011.

Macuja-Elizalde gives gredit to lawyer Katrina Legarda for the original concept of bringing together the three performing artists in one show. That planned show never materialized but the idea stuck in the ballerina’s mind.

“I was determined to do it, plain and simple. As an artist, I sincerely wanted to perform alongside these two Filipino icons before I retire from the stage, which is not too far from now. So I made it my own personal mission to make it happen,” she relates.

Because of public clamor, Macuja-Elizalde decided to produce the concert anew this year. She promises a more refined show, retaining bulk of last year’s repertoire but also presenting new numbers particularly from Licad.

Salonga, Licad and Macuja-Elizalde have had stellar careers in their respective fields. All three have followed similar paths, starting young and then eventually making their mark on the international stage.

Salonga began her career in musical theater at the age of seven. With her lead role in Miss Saigon, she took the West End and Broadway by storm, winning a Tony Award and a Sir Laurence Olivier Award, among the numerous accolades she reaped.

Licad made her debut with a full orchestra when she was just seven and launched her international career as a piano virtuoso when she became the youngest gold medalist of the prestigious Leventritt Competition at age 19.

Macuja-Elizalde learned her first ballet steps at eight and went on to study ballet in Russia. After graduating at the top of her class, she was invited to join the legendary Kirov Ballet as soloist – the first foreigner and Filipino to be given that honor.

With BPI Credit Cards, Sofitel Philippine Plaza, Mekeni, Uratex, Solaire, El Nido as major sponsors, “The Legends and the Classics Encore” is also supported by Island Rose. Steinway Gallery Singapore is the official piano sponsor. Tickets are available at all TicketWorld outlets. For details, check out www.ticketworld.com.ph or call 891-9999.