Libera Boys’ Choir back in October

MANILA, Philippines – Libera, the chart-topping boys’ choir from London who is known all around the world for their angelic voices and beautiful renditions of classical songs, is coming back to Manila in October. Their albums have topped both mainstream and classical charts in many countries, and their recordings hold their place in Top 10s alongside major artists like Andrea Bocelli.

This year, the boys join in on the festivities for the Philippine-UK Friendship Week by serenading us once again. Presented by SMART, Shell and Philippine Veterans Bank, the boys from London will grace the stages of the Philippines for their Manila concert happening on October 29 at the PICC Plenary Hall. As part of the first year anniversary celebration of the canonization of the Visayan martyr St. Pedro Calungsod, their Cebu concert, in partnership with Arts Council Cebu, will happen on October 31 in the chapel of San Pedro Calungsod located in SM Seaside Complex, South Road Properties.

The Best of LIBERA along with Your Favorite Christmas Carols

If you have never heard the unique, heavenly sound of LIBERA, then prepare yourself for something very special indeed.

The boys who make up the South London based vocal band Libera have been described as “normal” and “ordinary”. However, as their recordings and performances demonstrate, the music they produce is anything but. With shimmering, mystical chords and ecstatic harmonies they are unlike any other group you have ever heard. These are truly sounds to lift the soul.

Familiar to audiences across the world, the boys have a stunningly original sound, which is at once both ancient and modern. Their distinctive flowing white robes symbolise the traditional origins of their style – yet their music reaches across the generations to a new mainstream audience. Libera’s success in album charts around the world bears witness to the extraordinary appeal of this unique ‘boy band’. Enchanting audiences wherever they go, they have attracted an enthusiastic fan base in many countries, particularly the US, UK, Japan, the Philippines and South Korea.

The group is well known to British audiences through TV appearances and staged concerts at venues as diverse as the Queen Elizabeth Hall in London, the Grassington Festival, Abbey Road Studios and Arundel Cathedral. Recent appearances have included the Edinburgh Fringe festival, the National Concert Hall in Dublin and at St Peter’s Cathedral in Belfast. Libera have made many TV appearances including BBC-TV’s ‘Last Choir Standing’, on which the Libera boys were featured as guests. They were winners of the Saturday night show ‘When Will I Be Famous’ and had a whole documentary devoted to them on BBC-TV’s ‘Songs of Praise’. Other TV/Radio appearances have included BBC Breakfast and the Chris Evans Show. The boys are regularly to be heard on Classic FM, and last Christmas scored the top classical song download at iTunes. Libera regularly sing at events and services in cathedrals and churches like Buckfast Abbey and Westminster Cathedral. In the US and Canada, Libera are known through their concert tours and TV appearances including a nationwide PBS special, which was filmed in Holland. The boys had their debut at the Kennedy Center Honors, where they performed in front of the President and a hall full of celebrities – including Robert de Niro, Cameron Diaz, Diana Ross and Steve Martin. The boys were privileged to close the Kennedy Center Honours with a moving tribute to honoree Brian Wilson of the Beach Boys. This was followed by Libera’s participation in the Papal Mass at the climax of Pope Benedict XVI’s first visit to the USA. Performing to a capacity congregation of 65,000 at New York’s Yankee Stadium, Libera were the only British artists to take part in this historical event.

Libera have travelled across North America several times, appearing in venues as diverse as the Crystal Cathedral in California, the St Louis Basilica, St Paul and Minneapolis cathedrals, the Moody church in Chicago, the Riverside Church in NYC and other venues both secular and sacred from Texas to Toronto. Just recently they opened the annual Starkey Awards Gala in the Twin Cities, where they were featured artists on the same programme as Miley Cyrus and Meat Loaf.

In East Asia, the sounds of Libera are frequently heard in mainstream TV and radio programmes and their CDs ride high in the classical and pop charts of countries like Japan, South Korea, Singapore and the Philippines. The boys have sung the music for several feature films and television programmes. The most recent tour packed out the major concert venue in Seoul and the boys were feted by thousands of enthusiastic fans who queued for hours to meet them and collect autographs. During their last tour in the Philippines, Libera topped the main album charts and sung to the major concert halls in Manila and Cebu crammed full with excitable fans.

Through their involvement in Libera, the boys have travelled the world, recorded movie soundtracks and CDs and served as backing singers to mega-stars. But, as one of the boys said, “The traveling and filming is fun but even if we didn’t go anywhere I’d still want to do it because I just love singing.”

The Music of Libera

Libera is true to the meaning of its Latin title, ‘Free’, and crosses many musical boundaries.  With original repertoire, innovative textures and inventive arrangements the group brings an imaginative new perspective to the landscape of vocal music.

The core of the sound is built around the voices of the young singers with their clarity, enthusiasm and excitement – the haunting yet vibrant sound of the treble voice that has long been a feature of choral music, particularly in the church.

Indeed, the defining inspiration for Libera sprang from the ancient music of the cathedrals and monasteries – from the earliest form of choral music – plainsong.  The boys’ robes of course retain a visual continuation of that history and quite closely copy what the boy monks wore when they sang and were schooled in medieval monasteries.  Libera mixes the traditional chants with contemporary instrumentation and arrangement.  Hence songs like ‘Salva me’ and ‘Libera’ reflect the shapes and mood of the old plainchant whilst combining it with new lyrics and harmonies.  In fact, the song ‘Libera’ was the first to be written for the group – it uses a single line of plainsong with many overlapping tunes and harmony, which encompass the full range of the boys’ voices.

Some songs are arrangements of well-known classical works.  Although the originals cannot be bettered, some lend themselves to the uplifting sound and harmonies of the boys’ treble voices. The famous ‘Canon’ by Pachelbel, for instance, provides the basis for ‘Sanctus’ and an opportunity for some of the highest treble notes.

The lyrics of Libera songs, many of which are sung in Latin, are most frequently drawn from a variety of contemplative and inspirational sources, both ancient and modern, including the Mass, Requiem Mass, Stabat Mater and the Psalms. 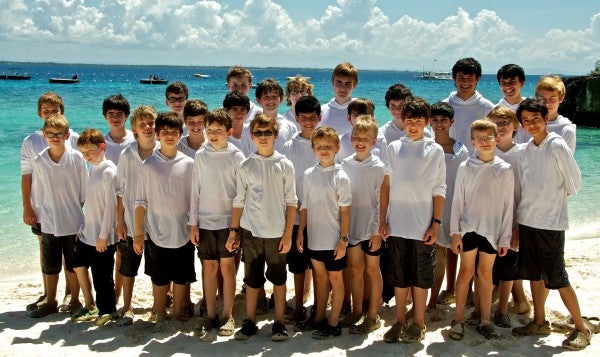 Libera has been captivating the hearts of the people all over the world, especially in Asia. Jam-packed concerts in Japan, South Korea, Taiwan, and the Philippines only prove that they really are Asia’s Best Loved Boys’ Choir.

Last 2009 and 2011, the boys from London impressed the Filipino audience by giving a moving performance of “Bayan Ko” which was so beautiful that the crowd obligingly gave them 10 rounds of applause during the song. For their third concert, we can expect nothing less than the grandeur of their previous shows.

Libera will include another heart-stopping performance of the crowd favorite “Bayan Ko”, songs from their entrancing repertoire such as Orinoco Flow, Angel From On High, Sanctus, and your favorite Christmas songs such as Carol of the bells, Silent Night, Joy To The World, In Dulci Jubilo, and Have Yourself A Merry Little Christmas to herald in the festive season that Filipinos love so much. For tickets, contact TicketWorld at 891-9999 or log on to www.ticketworld.com.ph.Ticket prices range from P7000-P4000 for VIP, P3000-P2000 for Orchestra, and P1500-P800 for Balcony. For Cebu ticket inquiries, contact Arts Council Cebu at (63-32) 233-0452 or (+63 917) 328 7917 or inquire online [email protected] or [email protected]. For online ticket sales, go to www.ticketworld.com.ph.

A percentage of the proceeds from their Manila concert will go to not one but three worthy causes – Children’s Hour, the BAA Foundation for Disadvantaged Children, and the victims of Typhoon Maring. Last year’s proceeds went into building a beautiful playground for the kids of Children’s Hour and needless to say, nothing is more touching than seeing these boys from the UK extend a hand of friendship to the kids in the Philippines thereby setting the foundation for strong future ties with Great Britain