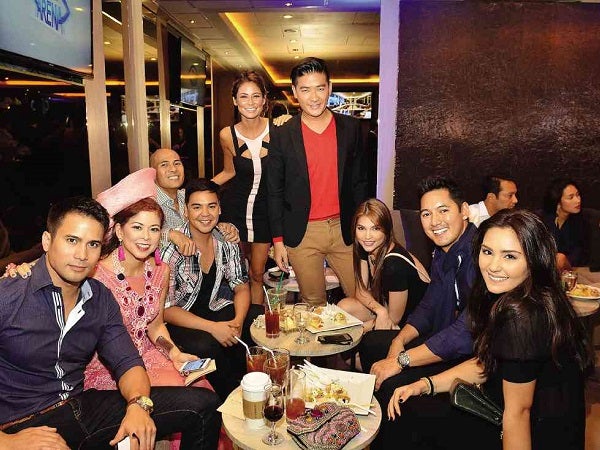 The artista world seems to be more exciting than yours or mine. The lights are brighter and the energy stronger whenever big stars arrive at a glittering scene.

The night shone brightest when the “Diamond” princess and Grammy award-winning artist Rihanna arrived and bedazzled Manila as part of her “Diamonds World Tour.” She performed her signature hits for thousands of fans at the jam-packed Mall of Asia Arena. Rihanna is one artist who can wow an audience with her electrifying energy and her effortless onstage moves.

Singing her new songs from her latest album, “Unapologetic,” the self-confessed “badgalRiRi,” turned the massive concert venue into a super dance club with laser lights and stage displays. After singing her hit catalog, the international pop star ended the concert on a high note with her heartfelt songs, “Stay” and “Diamonds.”

Thanks to Instagram, we knew the R&B diva flew into Manila in her private jet just hours before the concert. That only meant the concert would start quite late. Instead of waiting in the hall for the concert to begin, we enjoyed cocktails at the Members Lounge of the A-List Club.

The business lounge and membership club was created as “a luxurious place and service dedicated to the movers and shakers of today’s society.” The new A-List Club opened in celebration of the Mall of Asia Arena’s first anniversary last June.

Aside from being the place to chill before and after concerts, the A-List Club has a special side entrance to the Arena, so there are no lines and crowds to pass through. For inquiries on membership to the A-List Club, call 4702222 or visit the MOA Arena website, www.mallofasia-arena.com.

Stephanie met us at the Club to make sure we were all pampered while waiting for the concert to start. Our star-studded group included Anne Curtis, Vice Ganda, Ruffa and Richard Gutierrez.

Ruffa and I were together again at the grand launch of the Wil Tower Mall. Guests of honor at the ribbon-cutting included Senators Manny and Cynthia Villar, Mayor Herbert Bautista and Senate President Franklin Drilon.

The Wil Tower Mall is the newest lifestyle mall in Quezon City. It sports the most stunning light sculpture in the foyer, created by internationally acclaimed artist Kenneth Cobonpue. The mall is named after game show king and owner Willie Revillame, who was overwhelmed at the successful opening of his latest baby.

Highlighting the opening was a dramatic fashion show featuring creations with elaborate feathers and jewels by avant-garde designer Rocky Gathercole, as well as sexy models in skimpy swimsuits by designer Charina Sarte. The finale was the collection of fab designer Rajo Laurel.

And where Willie is, of course, his “Wowowillie” dancers are not far behind. The ladies performed a high-energy dance routine that thrilled the crowd. Afterward, Willie gave a moving speech about the mall being a product of his endless hard work and dedication to spread happiness daily.

Willie and his dancers were at my Fifty Shades of Tessa party in Balesin Island last month. They will be part of the entire feature that is coming out in one of Hola! magazine’s upcoming issues. With us was Jose Mari Ugarte, president of Hola! Philippines.

Hola! is the world’s leading lifestyle magazine. Its Philippine edition was launched just last month at the Sofitel Philippine Plaza. Like most media these days, Hola! is also all over the digital space, online at www.ph.hola.com or on Twitter and Instagram @holamagph.

Among the taipans present were Iñigo Zobel, Endika Aboitiz, Tessie Sy-Coson and Robert Coyiuto. Several businessmen came with their partners, including Ramon and Marissa Cojuangco and Beaver and Jackie Lopez.

Renee was very visible around Manila during her short visits here. She arrived on Aug. 27 with her fiancé/keyboardist Tommy King, and at once dove straight into promotions for her solo concert, “A Love That Will Last: Renee Olstead Live in Manila.”

Renee held a brief mall show at the atrium of the posh new SM Aura at Bonifacio Global City. Her repertoire there included her 2005 hit single, “A Love That Will Last” and her new iTunes hit, “She’s Got Your Name.” Renee’s concert was a production of Hi-Definition Radio, the team behind Radio High 105.9FM, co-presented by Visa and PLDT Fibr.